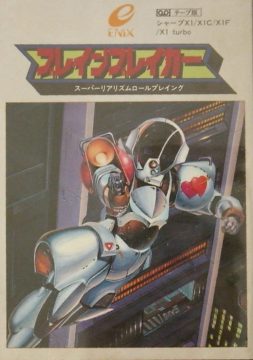 Brain Breaker is an epic 2D adventure exclusive to the Sharp X1 Japanese home computer. Being on fairly obscure hardware it’s now mostly unknown outside of a few Japanese blogs, and as such discovering it was purely by chance when visiting the Tokugawa forums. The author is H Ishikawa, the same mysterious gentleman behind Kagirinaki Tatakai – and just like Kagirinaki Tatakai, Brain Breaker is a game vastly ahead of its time, especially considering the medium it was on. Furthermore, it’s extremely excellent. Professor Hiroshi Ishikawa is now a professor at a university in Japan. If you want to read about the history of Professor Ishikawa and the making of both Brain Breaker and Kagirinaki Tatakai, there’s a dedicated interview page.

Right from the start Brain Breaker (hereafter BB) is a game all about obfuscation. It’s a title born from the technical difficulties of coding in assembly, 20 times the work that went into Kagirinaki Tatakai, and everything about it challenges you. Even the screenshots, since they use an unusual resolution which doesn’t take kindly to resizing or anti-aliasing.

Visually it’s quite beautiful in a way that only very old computer games can manage and is a considerable step-up from Kagirinaki Tatakai. The music is also a huge improvement and, despite there being only one tune, greatly adds to the haunting atmosphere of the planet. While the original Metroid didn’t influence BB, fans of the series might draw some similarities to both the music and gameplay. Structurally it plays like an overworld version of Metroid crossed with Elevator Action and maybe Impossible Mission – though in terms of mechanics it’s considerably more complex than all of these.

Entering the atmosphere of a seemingly dead alien planet your podship is destroyed by computer controlled anti-aircraft weapons, leaving you stranded with no equipment besides a radio to communicate with the computer on your mothership. For whatever reason the planet’s previous inhabitants have disappeared, hence the lack of life signals, but their enormous city structures still remain as a haunting indication of the past. Moving to the left shows the path is blocked by an immobile droid, forcing you to head to the right into an empty wilderness. After a long time walking you come across a laser rifle, and with nothing on the horizon the only option is to pick it up and return to the city.

Without a manual the controls may prove confusing: Z button picks items up and drops them, SPACE BAR is attack, UP is jump and also used for the jetpack, while F1, F2, F3, F4 and F5 are used for the special options at the bottom of the screen. ASK initiates a conversation with your computer, but is useless unless fluent in Japanese. SAVE acts as a respawn point, and even when using emulator save states it’s worth making judicious use of this!

Upon your return to the city it seems the robots have been activated and are sent to kill you. There’s a jetpack on the ground which can be picked up, but doing so reveals it to be broken, and it proceeds to hurtle you up and down between the sky and ground. This is the first of many red herrings BB throws at you, since there will be several instances of broken items design to throw you off track in trying to escape the planet. Later on there’s a hover bike which soon after mounting explodes, killing you. There’s also a broken rocket launcher which can’t be picked up, and de-activated droids in strange places. Not many games from this era would use precious memory resources on red herrings like this, and so it makes for some interesting surprises.

Eventually you should find a green building with elevator far to the left, except you can’t reach the upper floors. Inside the building is a working jetpack you can take, and this allows access to a floating island high above this building. Reach the island you’ll find a red coca cola vending machine, but it’s seemingly useless. For some reason you can only remove the ID card from it if the emulator is set to KEYBOARD mode (joystick mode or anything else won’t work), and you need to press the Z button several times before it relinquishes the card. With this you can return to the green building, ride the elevator to the upper floor computer and use F1 and F2 to communicate with it. So brings about a lengthy conversation with the malevolent hardware which, proclaiming to be frightened, gives up its Brain Breaker weapon. Except when you try to leave it traps the elevator, lectures you, then promptly causes you to explode. The only solution is to use the Brain Breaker gun (F3) on the computer before riding the elevator, since it disables all electronic devices.

From here you must explore the city, heading West to another green building, and using the ID card to gain entry and access to a guided missile launcher. X button fires this, and it proves extremely useful. A little to the left of here and you find a blue building, except the key card won’t work, and to gain entry you need to time your jumps and use the Brain Breaker on the forcefield. A few well places shots disables it. Inside are more elevators and a giant tank which, if disabled with the Brain Breaker, can be ridden around in. Later on you’re given instructions by a computer on how to use its special transport to warp to new areas (CTRL+W activates this).

Riding the elevator up takes you to a maze of floors, and one giant room filled with droids and a blocked tunnel on the floor. Here things again get clever, since in order to proceed you need to drop your laser rifle on the floor, on the manhole cover blocking the tunnel, and then fire rockets at your own gun, causing it to explode and destroying the blockage. From here you reach more computers, another green building with a gun that can melt the walls of surrounding buildings, and eventually you need to use the warping tank to find a special room with a crystalline alien life-form (DO NOT harm it!), free it, and then if you play your cards right you could end up receiving some kick-ass psychic powers which make you invincible, plus give you the ability to fly and melt walls with your body. It is the game’s Super Saiyan/God mode. Ultimately it allows you to destroy the planet’s central computer and see the brief ending.

Without Japanese fluency the clues given by computers will be lost on you. The objectives in BB are so obscure and esoteric, it’s doubtful anyone could finish the game without a guide – certainly not without a lot of trial and error. I’m curious to know just how many clues the computers give you. For example, does any of the in-game text explicitly tell you to destroy your own weapons to open the way forward? All of this obfuscation is what makes me love BB so much. It’s such a beautiful example of the era; in many ways it represents the pinnacle of obfuscated design in the mid-1980s, standing alongside such masterpieces as Legacy of the Wizard and Simon’s Quest. It represents a style of adventure which we are no longer provided by modern developers. Before using the NicoNico guide, I was absolutely in awe the first time I rode the elevator in the blue building, and each bit of progression felt like a genuine achievement. It was like being Indiana Jones and uncovering some forgotten civilization.

BB is sort of reminiscent of the Atari/Amiga classic Damocles. Though Damocles was in first-person 3D, both games share a haunting sense of loneliness as you wander an abandoned planet (in Damocles‘ case several planets) trying to solves various problems (follow the above link for a PC remake of Damocles). Although visually nothing alike, they share a lot of conceptual ideas, and Brain Breaker‘s biggest joy is exploration and discovery. I had considered making an English guide using the NicoNico video, but it’s more fun if you explore on your own. By all means use the video when stuck, but first experience the world it portrays without any outside help.

If you want to play it, we’ve provided a working emulator with game image HERE. Open the X1 emulator, load the Brain Breaker image, and then go to OTHER and choose STATE LOAD to load the BB.xst file. This should take you to the title screen. Enjoy!