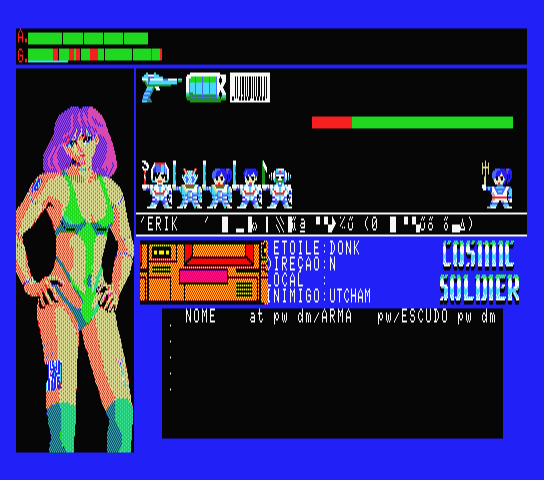 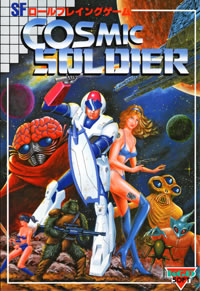 Japanese RPGs are usually known for being set in semi-fantasy worlds, with anime-style characters and having complicated plots and complex characters. Of course, some series defy this characterization, such as Kogado’s Cosmic Soldier series, one of the earliest Japanese RPG series. The three titles in the series consist of two similarly-styled MSX games, and a much more different Windows PC game. As opposed to the more standard JRPG 3rd person gameplay, the MSX games are played from a first-person perspective, closer to the style of Megami Tensei (which Cosmic Soldier predates) or Wizardy.

Although fairly primitive, they do have a fair amount of complexity for their age. What makes these games so interesting is their age, as they were among the first Japanese RPGs ever made, still showing the influence by early American games, but still showing some of the directions that the genre would later take. The second game was also one of the first Japanese RPGs to be released overseas, and an example of a well-done localization that is superior to the Japanese original. The first two games deserve some attention because of the unique style of gameplay and their age. However, while the first one offers a grinding-heavy experience typical of early RPGs, the PC version of the second one can be considered a good game. The third game is a more generic Japanese RPG, and too difficult to obtain to really deserve any attention.

The first game in the series is where it all begins, and it introduces the basic gameplay that the sequel would refine. The story takes place in the year 3530, where the KGD (obviously referencing Kogado, the name of the developer) star limits have fallen to the evil Quilla empire (spelled “Quila” in the second game). Your character is a soldier of the Alliance, the generic “good guys”, who send you off on a mission with a female android partner to stop this menace.

The game basically consists of one big fetch quest, in which you must locate 3 data cards and 4 “filters” that allow access to a secret file in the enemy data bank. This file contains a precious formula to destroy the μ-80, a substance that blocks the main character’s psychic abilities, preventing him from putting an end to the evil schemes of the Empire. Data cards and filters are located in different stars of the Quila system, which can be reached immediately via an air shuttle; all the information you need in order to locate the items can be obtained by talking to enemies. Once the items are in your possession, you must locate the data bank and get the file. There is no final boss to defeat, but you have to insert a 4-cypher security code granting access to the file. The four numbers can be discovered by using the data cards and filters with each other, but the correct order is unknown and must be obtained in a number guessing game right in the final room – get one position wrong and you are buzzed. Get the security code right, and you have completed the game: all characters, including enemies, take out their cheerleading pom-poms to celebrate your victory.

The game interface is exceptionally ugly, clunky, and poorly designed. Your android partner takes up far too much room in the screen, while the first-person view has only a tiny space in the center of the screen. Above that is the main box, where you can see your party members, the items you are carrying, and the current band of enemies. The game starts up allowing you to resume a game from a pre-existing party, or you can create a new one from scratch. Creating a new party just consists in naming the main character, since recruiting party members is part of the game experience. A maximum of two parties are allowed, and even though the game can be saved at any moment (except during battles), doing so will update the current party and bring you back to the party selection screen. This means, in particular, that if you screw up by saving in an unfavorable condition you will have to restart a game from scratch.Movement through the dungeons is controlled using the direction keys (the number keys for the PC-88 version), and is pretty fast and responsive.

The presence of an android partner (named Mary) coming along with you is one of the main features of Cosmic Soldier. She cannot take damage or die, and her main purpose is to hold gadgets which can help you on your adventure. Interestingly, get this, your android partner is also one of the first examples of girls in a “bikini armor” appearing in a videogame (an earlier example is Panoramatou, the first RPG by Nihon Falcom, published in 1983). The aforementioned gadgets are, in fact, trinkets (such as a bracelet, a pair of ear rings and *aherm* a sanitary napkin), lost within the various dungeons on different stars of the Quila empire, that the android will have to wear in order to acquire new abilities. Information about these can be gathered at the few research labs found in some towns (normal dungeons with additional facilities), which will give for free rather lengthy descriptions on the nature of the ability and where the corresponding android parts can be found. These include: 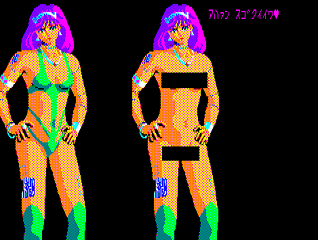 Fully-powered android, moments before making use of the BIO-POWER-EXCHANGER (NSFW)

Apart from the quest items and trinkets, there is not much to loot in the dungeons. In addition, these can be very challenging to map as they feature invisible walls, warps, loops, floor traps, damage tiles and elevators, and even with the map at hand it can still be difficult to have a clear idea on which path to choose. There are “junk shops” in most towns where you can buy a variety of items such as watches, ropes and boots, but except for one important quest item, these are of no use at all. Interestingly, among these items you can buy a copy of Emmy 2, the famous girl conversation game published by Kogado one year before. One star (XSUS) also features a casino, conveniently hidden behind a bar, where you can play a simple roulette-like game to win money.

Like most RPGs of the time, enemy encounters take place randomly throughout the dungeons, and the encounter rate is pretty high. Battles are turn-based, with the enemy rarely having a chance to strike first. When a battle takes place, the characters staying in front of the respective lines are the ones taking damage; at first only the armor takes damage, and eventually the character himself when the armor is destroyed. Enemies can come in packs of up to seven units, although always of the same type. Even though there are no status ailments and the only possible attacks are of the physical type, there is still a certain amount of strategy that can be put into battles. In particular, at each turn you have to instruct your characters (all at once) about how much force they should put into their attacks, ranging from “with all your might” to “say booh!”. The reasoning here is that some enemies, when left with a small amount of energy, will plead for mercy and offer you money or precious information. In these cases, a successful trade will result in an increase of the attack points (ATT) for the player; in contrast, destroying enemies will increase defense (GARD). The actual level-up will only take place when the player has accumulated more experience points than his current attack/defense power, that is to say, a level-up occurs when the cyan 1-pixel bar in the upper part of the screen is longer than the corresponding stack of green bars. Obviously, this mechanism can be exploited by keeping the green bars as short as possible, which corresponds to playing solo with no armor at all. Even so, the game still requires a considerable amount of grinding in order to be able to proceed. There is the possibility to escape battles, and in case of success your party will actually move to a random, nearby tile in the dungeon.

Perhaps the most notable feature of Cosmic Soldier is the possibility to recruit allies among your foes, a concept that will become a staple later on in the Megami Tensei franchise. Not all enemies can be approached (in particular not Empire soldiers and wild beasts), and selecting specific races doesn’t make much of a difference since most of the actual attack/defense power depends on their equipment, which can be easily purchased in towns. Recruited characters must be assigned a nickname, and since dead characters cannot be resurrected, new ones must be constantly recruited. Sometimes, enemies will approach you asking to buy some of your equipment, offering alwaysmore money than the actual selling price. This seriously breaks the economy in the game, as one could just go on selling equipment to enemies and buy it back in shops. As a result, money stops being a problem pretty soon, and you’ll always be able to equip the best possible for the whole party. However, although there is an item inventory, it cannot be used to bring replacement weapons and armor along with you. Thus, once the armor of one ally is destroyed, it is gone for good unless there is a shop nearby. Also, character positions are fixed as long as they are alive, but you are given the possibility to exchange weapons and armors among them. This is a typical playing scenario:

In the MSX version of the game battles are slow, and the graphics for your party members are small and ugly. The PC-88 version, on the other hand, drastically speeds up the rate of battle, the graphics aren’t great but they’re workable, and the overall interface also feels a bit better designed.

As previously mentioned, there are two versions of this game floating around. The MSX version is extremely awful, and should be avoided as the only ROM for it is half in Portuguese and half in gibberish. The PC-88 version of the game is playable with better graphics for your characters and when an enemy appears, you get to see a screenshot of it in the bottom-right corner of the screen. It’s not as good as its sequel, but the PC-88 version of Cosmic Soldier is worth a try if you know Japanese, just make sure to grab the maps and get ready for some old school sci-fi dungeon crawling with a quirk.

Following its release, the monthly magazine POPCOM started serializing a comic based on the game. Apparently the comic was not very successful, and it mainly featured naked drawings of the android Mary.