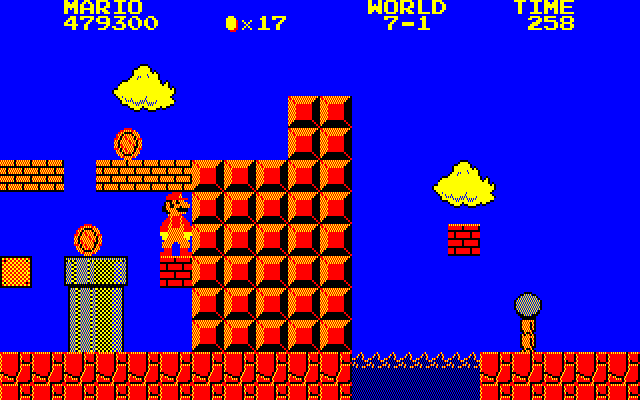 The most ambitious of the three games, and as a result the one with the most problems. This tries to be a remake of Super Mario Bros. on the NES, and while it has a greater level of depth and variety than the two previous titles, the limitations of the hardware can make it frustrating to play. 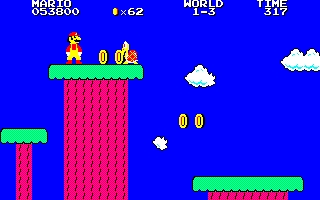 It’s also an exercise in masochism. The designers at Hudson seem intent on punishing you for playing it in the same way as the original Super Mario Bros., which ironically means it’s great for retro enthusiasts to examine now, but would have defeated the purpose of creating such a port back in the day. 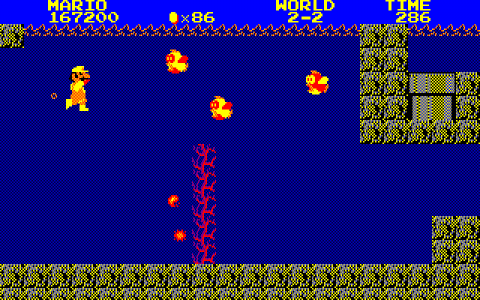 It was presumably to appeal to computer owners who wanted to enjoy what their console-owning friends were playing, so the utterly absurd and at times surreal design changes would have alienated anyone expecting a true Mario game. This goes beyond what the original Lost Levels attempted, in terms of subverting Miyamoto’s original vision, and I can imagine hundreds of Japanese children angry with frustration at just how punishing and strange it is. 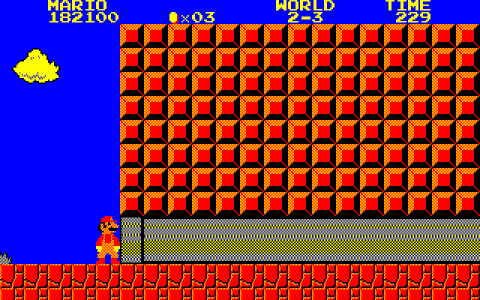 The big difference is that the screen doesn’t scroll smoothly, but instead flicks across. Annoyingly you can see part of the next area, meaning the screen flicks across before Mario reaches the edge, totally destroying any sense of timing for precise jumps. Plus, turtle shells will bounce off of scenery even if it’s on a subsequent screen, threatening to kill unsuspecting players. The fact the screen doesn’t scroll can, in some cases, make this appear as if turtle shells are bouncing off open space. 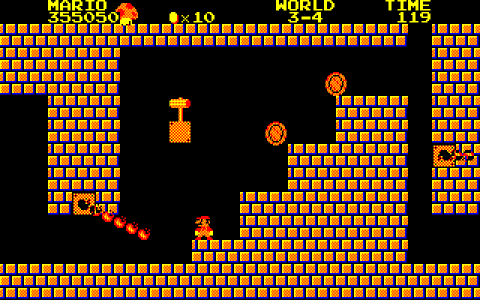 Then there are pipes in strange places implying a secret warp but leading nowhere! Meanwhile invisible coin blocks are placed at the most infuriating of places, so as you launch into what appears to be an open jumping areas, said block appears and sends you hurtling down a hole. It’s like Hudson was intentionally trying to mess with your mind. There are also cameo appearances from the Hudson bee, plus enemies from Mario Bros. and Donkey Kong. (Mario can even grab a DK hammer at one point.) 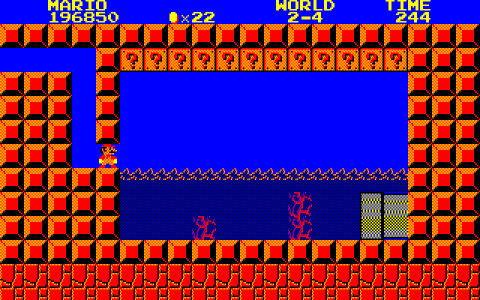 For some reason Mario doesn’t automatically enter the warp pipe at the end of level 1-1, and so the player must manually make him walk into it. Then there’s the fiendish puzzles, such as in world 4-3, where you need to make both sides of an elevator drop off the string they are on, to make a platform appear two screens onwards. Failure to do so makes the stage impossible to finish. 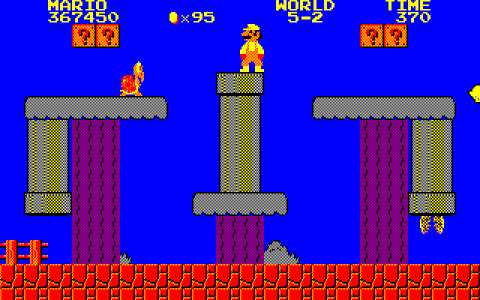 While the most fascinating to read about and contemplate, its sheer strangeness, the technical limitations, high difficulty and general glitchiness make it the least fun to play. YouTube user powerfulnana used to have over 20 videos, showing how to complete the game, but at the time of writing, their account has been suspended. NicoNico video would be a good place to sign up for videos. 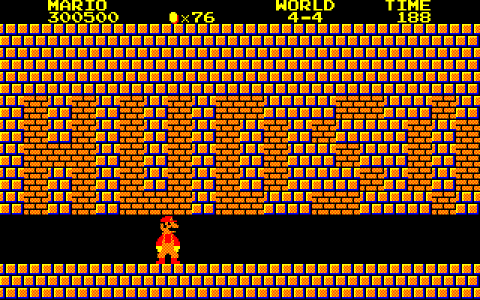 Released on both the PC-88 and X1 computers, the X1 version (like most games released on both systems) is superior. Although the colours are a little over-saturated, there are more of them onscreen, whereas the PC-88 version looks distinctly orange, and doesn’t even display the colour green. Look closely at screenshots of the pipes: they’re actially a blue/yellow mosaic. The timing is also off, and runs too fast – though attempting to lower the PC-88’s CPU clock speed results in the game going choppy. If emulating them, it’s worth getting the X1 version, but in either case, play around with the CPU clock speed to find what suits you. 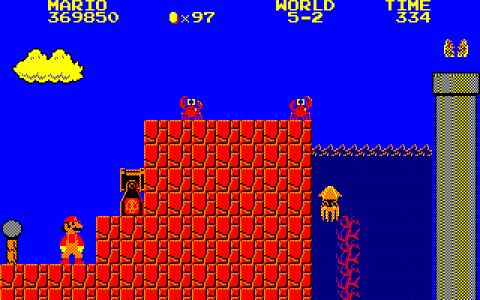 Also, since it’s such a difficult game, the ending can be seen HERE. Courtesy of ReyVGM and 20 hours’ worth of playing.

Tracking down emulators and disk images can be extremely difficult, so we’re going to host all you need RIGHT HERE. The ZIP file contains the PC-88 emulator M88, along with all needed ROM files, plus disk images of the three Mario games. To make things even easier, we’re including a save-state for each game. So, do the following:

2.) Load the disk image via DISK and DRIVE 1 (the games are in a folder named as such)

3.) Go to TOOLS and click LOAD SNAPSHOT. This should load the title screen, without any need to mess around with emulator mode settings.

As a neato bonus, we’ve included the X1 disk image of Super Mario Bros. Special, since it’s the more colourful version, along with the emulator. Just load from FDD0.

Since most disk images of Super Mario Bros. Special contain a bug, a patch has been made. Whether you have the patience to reach level 4-4 is another matter entirely.