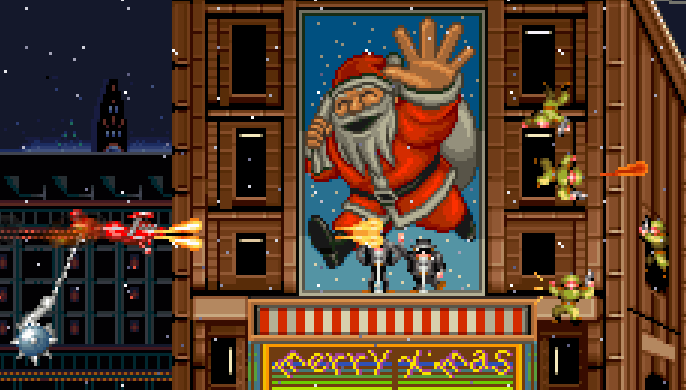 Boogie Wings, known in Japan as The Great Ragtime Show, is one of Data East’s most obscure arcade titles. Too bad that the game was lost among a crowd of formulaic arcade space shooters, because it blows most of them out of the water, thanks to its setting, style and gameplay innovations.

The protagonist of Boogie Wings is a dashing young inventor and aviator, a pilot of his own prized biplane. He fights against the army of a villainous unnamed professor, a stereotypical villain from old-time serials complete with top hat, cape and Dick Dastardly mustaches (no monocle, though). According to the arcade flyer, the game is set in “some unknown era, over some unknown town”, but it’s clearly inspired by the tales of flying aces in World War I, most likely the “Red Baron” – your biplane is even painted red. The game starts with your heroic aviator escaping from a huge hangar that is being destroyed by some flying fortress. A short time after escaping from the burning wreckage, he will be taunted by the professor and his henchmen, swooping in on some sort of steampunk contraption and leaving shortly after. They will do this in every subsequent stage, complete with leitmotif. 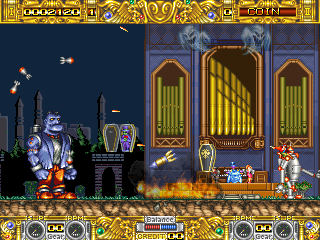 The first thing one notices about the airplane is the “skyhook”, the grappling hook swinging under it, carries a mine that acts as a smart bomb if thrown with the second button. The mine can also be used to destroy enemy planes and vehicles, by moving the joystick in circular motions and using the chain as a wrecking ball. This idea already elevates the strategic component Boogie Wings, but this is just the beginning. The hook, when empty, can be used to pick up and throw almost everything in the game, be it other enemy vehicles and soldiers, or pieces of landscape (trees, statues, crates, etc), making for an especially versatile weapon. It takes a while to get used to it, but in the hands of the most skilled players, it becomes a great advantage.

There’s also a slight implementation of physics in that heavier and bigger objects are a little harder to move around, though nothing drags the plane down of course, or the game would become unplayable. This also helps the comical and crazy tone of Boogie Wings, with the strangest things used as makeshift weapons. You haven’t seen anything until you get to smash an enemy tank with the head of a model T. Rex! 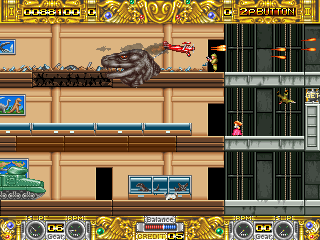 The hook also changes the implementation of smart bombs. Mines aren’t hard to find, however, the plane can pick up only one at a time, so there’s the matter of choosing whether to use them to clear the screen in the most hectic situations (which happen pretty often… and with almost no slowdown at that), or save them and continue using them as wrecking balls.

Another thing becomes apparent when you get hit: the biplane can sustain two hits before exploding, but even then you don’t lose a life, instead you take control of the pilot and the game becomes sort of a run-‘n-gun! The pilot is super-humanly fast and strong, even capable of outrunning everything and picking up things much bigger than him, and damaging enemies by jumping on them, but one hit will still defeat him. This is probably a reference/homage to Data East’s earlier Wolf Fang, released the year before, wherein once the mecha was destroyed the player took control of its pilot. 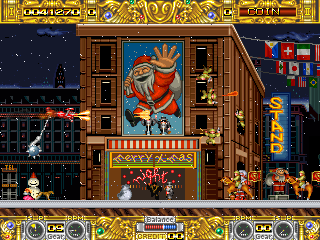 Luckily, the aviator is a true pulp hero and is totally unfazed by the destruction of his plane… as long as he can get his hands on another vehicle! The designers clearly had a lot of fun in implementing this feature, since our hero not only can pilot common vehicles like tanks and jeeps, but also amusing and/or cool ones like pogo sticks, jumping steampunk contraptions with flamethrowers, horses, old-timey fire engines that shoot missiles, humanoid robots that look like tin toys, and even elephants. All of these provide one or more hit points and making for an especially funny and madcap experience. Oh, and he always yells “Ya-Hoo!!” when boarding a new vehicle. What’s not to love?

The biplane, however, has some advantages over the other means of transportation – its speed and shot can be improved with power-ups, and it will generate an electric shockwave that damages everything around it; this move can be done when the gauge in the lower part of the interface is full, after tapping the button very fast, but be careful not to overheat the biplane’s engine. 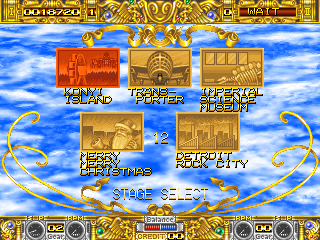 After completing the first stage (nothing more than a landing strip, but with nice parallax scrolling), a screen asking us to choose the next one from a group of five appears. These are the amusement park of “Konyi Island”, a humongous zeppelin named the Transporter, a museum of natural history, the busy streets of a big city during Christmas holidays, and some factory named “Detroit Rock City” (just like the KISS song, whose riff is vaguely referenced in the beginning of the BGM). The last one is the blandest and least interesting of the bunch, but the others more than make up for it.

Take the Transporter, for example. The level begins outside the titular zeppelin as a normal shooter, until you get to its top and infiltrate it on foot, turning the level into a platform game. At one point the aircraft begins to fall and the storage area becomes a zero-gravity environment, with vehicles, enemies and crates floating everywhere. You then get to the control room, meeting the Professor who manages to escape, and after having destroyed the fuel supply, the level ends with our hero escaping from the exploding Transporter in the nick of time. 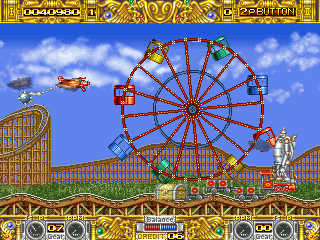 Konyi Island has a part where the Ferris wheel starts rolling around wreaking havoc, and it ends with a haunted house that reveals a gigantic organ played by the professor, while ghosts come out of the pipes, coffins with zombies emerge from the ground and a mechanical giant Frankenstein monster attacks with a ball and chain. As for the museum, are there any other games wherein the player has to fight the Trojan Horse?

The “Merry Merry Christmas” stage is arguably the best of them all – the neon-lit streets full of strolling people are already very charming, as is the sweet medley of holiday tunes that makes the BGM, but the set-piece of the stage is what makes it special. The whole level is spent chasing a humongous drilling machine that constantly releases other vehicles. The heroes first follow the machine’s track under a bank vault, to reemerge in a baseball field (check out the puzzled players and umpires!), then again under the earth until the foundations of a hotel collapse on the machine, finally destroying it for good. The aviators climb the stairs of the hotel to breathe at last some fresh air… only to meet the real boss, a huge Santa Claus statue with an evil side and one of the hardest battles in the game. The novelty of the setting, coupled with the high level of detail and interactivity with the scenery, is what makes the level a joy to play, or just watch. It should be noted that every level has some degree of interactivity though, be it destructible elements or things that can be picked up and thrown around. 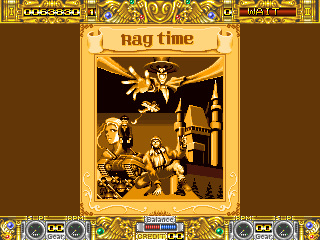 After completing all the levels, the final stage, the raid on the professor’s hideout, begins. It is a bit of a letdown after some of the more intense stages. Destroying giant cogs and avoiding being crushed by metal poles is not that exciting, plus the BGM is pretty bad. When you finally meet the villains, they claim they were not taunting you but just warning you, and rant about having traveled in time and having stolen money and built an army just to prevent some major disaster in the future. You can choose to believe them or not: if you do, they will get pissed off because you didn’t listen and use the power of the time machine on you, making you go back in time (i.e. replaying one of the previous levels) and, after having completed the final stage again (which feels a bit cheap), ask you to be the new pilot for the machine. The end.

If you don’t, you have to fight them on their time machine (which takes a more than passing inspiration from the 1960 film The Time Machine based upon H.G. Wells’ story). After having defeated them, and wondered if there was truth in their words, it’s time for the fantastic credits sequence. It’s one of the few examples of interactive credits in an arcade game – you move around in your biplane as usual, while below you every single character and sprite of the game appears. Every one of the vehicles is yours to take, all this while lovely penciled sepia pictures appear in the background and jolly ragtime (what else?) music plays. The sequence, skippable by pressing the Start button, ends with a caricature of the development team, all dressed as various characters from the game. 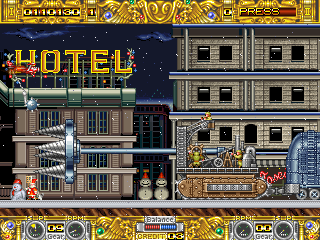 This is a fitting finale for such an amusing and funny title, one that stands out for the originality of setting and the high detail of the graphics, with tiny but well-animated sprites (see the soldiers waking up and getting dressed before fighting, or the Professor’s assistants when he’s making his final speech) and tons of wacky, comical details – you can shoot the trees at the beginning of Konyi Island to trim them into goofy topiary arrangements, the aviator using a pedal-powered balloon when downed in a level with no floor, annoying barking dogs following you throughout the levels, and more. There’s even a cameo of Santos from the bizarre Trio the Punch in the form of a statue you can lift and throw at the enemy.

Unfortunately the game was never ported to any system, and neither has resurfaced when part of Data East’s library was included in Majesco’s Data East Arcade Classics published in 2010 for the Wii. The only possible reference to it is in Cave’s Progear, which features a curiously similar intro (biplane escaping from burning hangar). Currently the only way to play it is through emulation, a good opportunity to experience one of the most colorful, craziest, but still very competent, shooters of all times. 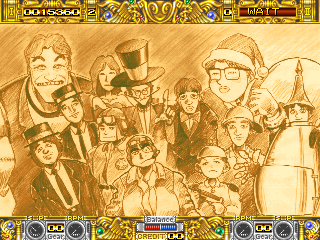 There is no real difference between World and Japan versions, outside of the translation of dialogues and instructions in English, and the modification of the opening graphics to accommodate the new title. Even the voice yelling “The Great Ragtime Show!” was left in Boogie Wings, although only over the intermissions between levels and not in the title sequence.

Links:
VG Junk Article about the game that includes a comment from the game’s main developer himself in the comment section.