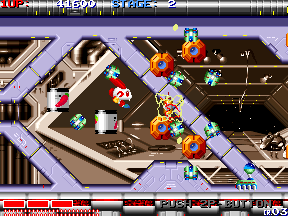 One of the lesser-known games from the arcade renaissance of the late 1980s, Rabio Lepus was developed by V-System (later Video System) in 1987, and localized in America by Bally-Sente as Rabbit Punch. Sente itself has an interesting bit of history, starting out as Videa in 1982 before being sold to Atari founder Nolan Bushnell one year later. One year after that, Sente became an imprint of Bally-Midway, around the same time the company purchased Sega from Paramount/Gulf & Western (now Viacom).

Bally-Sente was an early pioneer of the arcade jukebox, designing its Sente Arcade Computer system to take cartridges years before Capcom’s CPS and SNK’s Neo-Geo systems. Bally-Sente developed the lion’s share of its games (typically sports titles like Hat Trick, Sente Mini Golf, and Stocker) in-house for the SAC hardware, making Rabbit Punch something of an oddity in the Sente library. It was created in Japan and incompatible with the 6809-powered SAC, running on the more capable 68000/Z80 hardware that became increasingly popular in the 1980s. 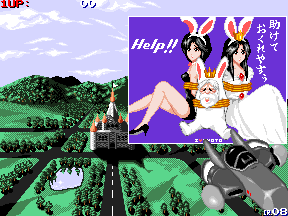 It’s unclear why Bally-Sente picked Rabbit Punch for localization, or if Nolan Bushnell had any influence on this decision. Most likely it was chosen because the license was cheap and because side-scrolling shooters were growing in popularity at the time, as evidenced by Konami’s Life Force (1986), Capcom’s Side Arms: Hyper Dyne (1986), and Irem’s R-Type (1987).

Rabio Lepus begins as many games of its time did, with a royal kidnapping. A mechanical army takes gentle King Kitashirakawa and his granddaughters hostage, and it’s up to Rabio and Lepus, the elite members of the robot rabbit guard, to retrieve them while delivering justice to the fiends responsible. Fueled by carrots, armed with missiles, and packing a mean punch, this determined duo won’t quit until the royal family has been safely returned to their homeland. The storyline plays out in brief cut scenes after every fourth stage, although the US version of the game omits some of that dialog.

The gameplay of Rabio Lepus should be familiar territory to anyone who’s played side scrolling shoot ’em ups, but there a few key differences worth noting. The first is that the weapon system is streamlined, with one button firing a stream of flashing bullets and the other unleashing a cluster of missiles. You’ve got an endless supply of bullets, but the game isn’t so generous with missiles, granting you a small handful and forcing you to collect more from the cans of carrots found in each stage. Your bullets can’t be powered up, but the missiles can, doubling in both strength and number after you collect a ribbon. Having a bow stuck to your rabbit’s ears doesn’t make it any more intimidating, but you can’t argue with the results!

There’s one other wrinkle to the gameplay… melee combat. Come dangerously close to an enemy and your rabbit jabs it with a gloved fist, doing heavy damage or destroying it outright. You’ll often need to do this to clear away the tougher enemies blocking your path, but it’s also useful for cracking open the carrot cans, keeping the power ups inside from falling off the screen as they so often do when the cans are struck with bullets. This isn’t quite so bad when the cans contain bags of money or a few missiles, but it can be downright infuriating when you find a tanuki. This rare item can turn you into a rainbow-colored comet of death for eight seconds… but not if it drops out of your reach.

Rabio Lepus represents both a strong debut for Video System as well as a solid entry in a genre that would explode in popularity years later. The game wears its 16-bit hardware on its sleeve, with parallax scrolling, an eerie science-fiction setting, and digitized speech which regularly warns players of approaching bosses and depleted missile stocks. Past that, the devastating “rabbit punch” likely paved the way for other melee tactics in shooters, like grazing and the laser sword in Radiant Silvergun.

Unfortunately, Rabio Lepus has just as many flaws, keeping it several steps behind competing shooters like R-Type. Each stage is brief and frustratingly cramped, and surprise ambushes from swarms of enemies means you’re unlikely to survive for long, even with a generous life bar and the support of a second player. The frustration only mounts in the US release Rabbit Punch, which drags you back to the ninth stage after you lose all your lives, no matter how far you’ve made it past that point.

Rabio Lepus was given a rather loose conversion on the PC Engine, titled Rabio Lepus Special. The “Special” suffix is subject to debate, but it is significantly different from the arcade original, with longer levels, improved music, and the option to key in codes at the title screen for extra lives and more powerful weapons. On the down side, the backgrounds take a hit in the transition to the HuCard format (say goodbye to Robocop’s exposed brain!), there’s no two player option, and you’re sent back to a checkpoint if you die, making an already difficult game that much tougher. Dedicated fans of the arcade game may want to stick with Hamster’s more faithful port, released in Japan for the Playstation 2.

The series concluded with Rabio Lepus Special, but its battle droid bunnies made cameo appearances throughout Video System’s more popular Aero Fighters series, even being offered as unlockable characters in the Super NES port released by Mc ‘O River. The kidnapped king Taro Kitashirakawa is also a playable character in Aero Fighters, renamed “Lord River-n-White” in the United States. (It’s a reasonably close translation of shirakawa, which means “white river” in Japanese.) The ghost-like Tenukii Chaud makes frequent appearances as a villain in Aero Fighters, as well as its predecessor Turbo Force. Finally, there are signs advertising Rabio Lepus in Super Volleyball for the Sega Genesis, although puzzlingly, the game itself was never ported to that system, finding a home on the Japanese PC Engine instead.

Now that Video System and its successor Psikyo have closed their doors, it’s unlikely that Rabio Lepus will be making a comeback. However, the game has nevertheless left its mark on the industry, inspiring futuristic rabbits like IGS’s Astro Rabby and Sony’s Jumping Flash. It wouldn’t be much of a leap to expect more in the years to come. 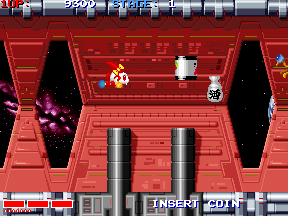 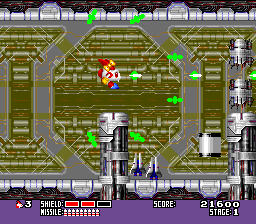