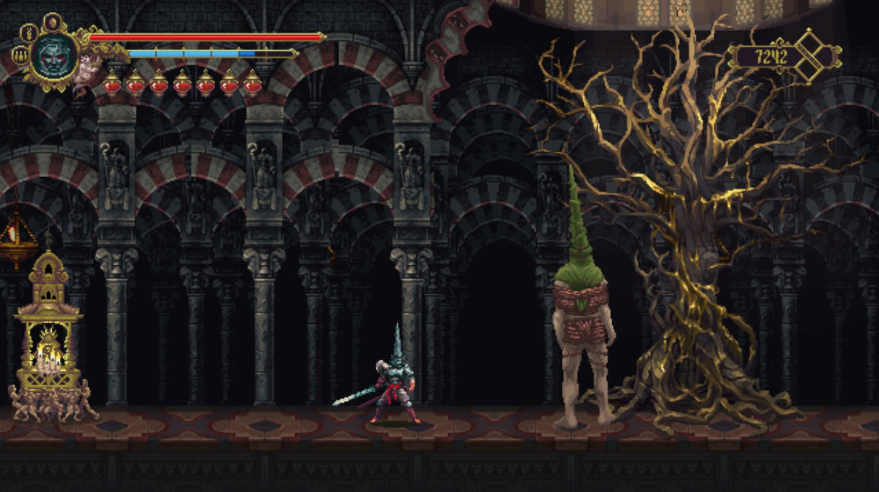 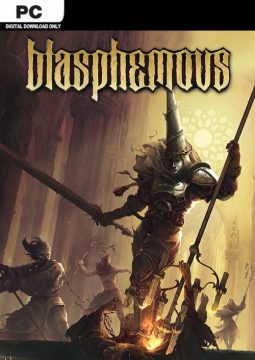 While there’s nothing inherently negative about the terms ‘Souls-like’ or ‘Metroidvania’, you could hardly say that the indie scene had experienced a shortage of either of these genres at any point in the last five years. One could happily play a hundred games that tried to do ‘Dark Souls but 2D’ with a bit of Symphony of the Night thrown in – which is fortunate for me, because that’s approximately how many are released each week – but in such a competitive market, the developer would have to nail absolutely everything in order to stand out; a cast, setting and plot with thematic consistency of tragedy, but not hopelessness. A satisfying and extremely replayable gameplay loop that’s reliably difficult, but not irritatingly so. And a world so beautifully broken that it manages to be awful and awe-inspiring at the same time. Enter Blasphemous. 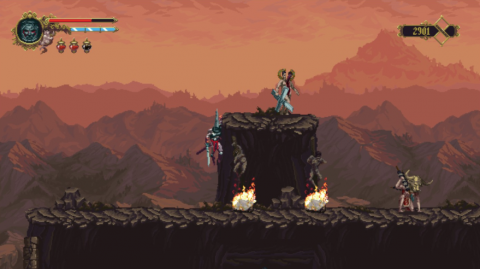 The aforementioned Kickstarter was launched in May 2017, touting the game as a “dark and brutal non-linear platformer” in which you “vanquish bloodthirsty creatures, the devotees of a twisted religion.” The developers, ‘The Game Kitchen’, had previously worked on The Last Door, a point and click adventure reminiscent of old LucasArts titles, but crammed full of psychological horror. So while this wasn’t their first title, an open ended Metroidvania was a pretty big departure from their last game. But their goal of $50,000 was met within the first 24 hours, and they went on to meet the requirements for an incredible seventeen stretch goals, including a digital comic, voice acting, hiring additional staff, and several new modes of play. Not all of these have been implemented yet at the time of writing, but as Blasphemous was only released in September 2019 across the PS4, Switch, Xbox One and PC, it’s understandable that they’re not finished adding content to the game, and undeniable that their Kickstarter campaign was a roaring success. Which is mostly fantastic, but given the game’s heavy religious imagery, if it had been a failure, one could have worked the pun ‘Smitey No. 9’ into this review somewhere.

Surprisingly for a game that’s so heavy on the story, Blasphemous doesn’t focus very much on the purportedly main character. You play as The Penitent One, the last surviving member of the Brotherhood of the Silent Sorrow after the rest of the gang came down with a bad case of deadness, courtesy of the gigantic warm-up boss you face after just a few rooms. You have a nice sword, a pointy hat (‘capirote’, for you hat enthusiasts,) and you’ve either taken a vow of silence or you’re just not the chatty type because The Penitent One never says a word. The land, Cvstodia, has entered an age of corruption following an event referred to as ‘The Miracle’, or sometimes more accurately ‘The Grievous Miracle’, and your mission to attempt to reverse this calls for you to make your way to the Cradle of Affliction. But first, you must fight three bosses to find three holy wounds needed to unlock the sacred door at the end of the Bridge of Three Calvaries, which takes you to a second area where you must fight three more bosses to gain three masks in order to…and so forth.

The story of The Penitent One isn’t the story of Blasphemous, though. The real story is of Cvstodia, the horrible place it has become, the fairly horrible place it used to be, and your attempt to fix things in spite of not really having many abilities that don’t involve stabbing. The worldbuilding is legitimately phenomenal, as every item you find has a description in the menu offering more information on characters, enemies, bosses, the land, and many of the unfortunate fates that befell people before, during and after the grievous miracle. And you’ll want to seek them out and read them because they’re genuinely interesting, as well as the source of most of the game’s themes. 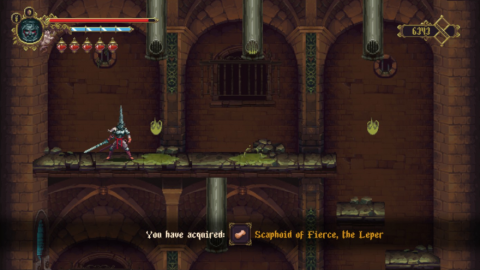 Take one of the first bosses, ‘Our Lady of the Charred Visage’. She was a young woman so beautiful that sculptors based their statues on her, people brought her on processions, and her beauty was considered a gift or a miracle from God. Eventually, feeling guilty from all of this praise, she poured boiling oil down her face and left to join a convent. But while she survived, the wound she suffered never fully healed, and in time, the eternally burning, agonizing scorched wound was itself seen as a miracle and canonized by the church, rendering her actions pointless. Not only is this an interesting piece of lore and a way to explore themes such as the futility of extreme religious fervor, but it’s also based on an actual Spanish legend about María Fernández Coronel’s attempt to ward off the advances of King Pedro I of Castile.

The rest of the game reveals that the developers know their history. Their creative director, Enrique Cabeza, has specifically cited religious iconography from Spanish history as a source of inspiration for the art direction, with specific nods to Velázquez, Zurbarán, Murillo and Ribera, and especially the work of Francisco Goya, in particular the painting ‘A Procession of Flagellants’. Blasphemous is dripping in Spanish culture – no surprise, as The Game Kitchen are based in Spain – from its amazing pixel art to the extensive lore, and even something as simple as the names of the bosses, like Ten Piedad; translation, ‘Have Mercy’, which arguably you would be delivering by putting them out of their misery.

When it comes to the action, while there is an element of platforming involved, the combat is the main attraction, and most of the challenge of the platforming comes from avoiding or fighting your way through the enemies most likely to interrupt a crucial jump. You begin the game with a standard three-slash combo, a jump, the ability to parry and slide short distances, and a pretty small life bar. Your sword, ‘Mea Culpa’ or ‘My Guilt’ can be upgraded at altars that are scattered across the land, usually just after a boss fight, and by spending Tears of Atonement, Blasphemous’ currency, you can get new abilities like a slide-attack, downwards stab, or a projectile attack that costs some mana. Speaking of which, there’s a mana system to allow you to cast a variety of spells, and if you’re running low, you can sacrifice a bit of your health to give yourself some more magic power in a pinch.

But these are just the basics of one of the most satisfyingly customizable combat systems I’ve ever seen. There are so many things to equip and so many interesting effects they can give you, primarily in the form of rosary beads, which you can equip an increasing number of as long as you keep finding more knots of rosary rope. These trinkets, all with their own basic description and extended lore, range from providing extra defense against certain types of attack, to boosting your health or mana, but then there are the more unique abilities, like reducing the recovery time after a long fall, or occasionally refilling your bile vessels – flasks to recover health – upon destroying objects, or the most useful ability in the game; becoming immune to damage while using a bile vessel, which is practically mandatory if you want to heal during a boss fight. 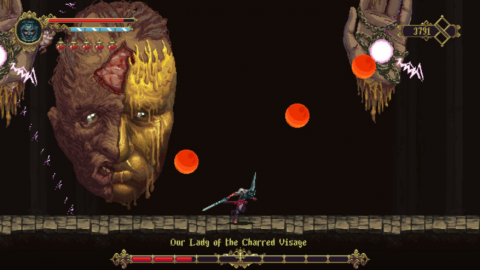 There are also holy relics, albeit a much smaller number, and you can only equip three at a time, with effects such as allowing you to read the memories of any dead bodies you come across – which may warn you of upcoming traps – or protection from poison damage, or the creation of platforms of blood in certain areas. Blasphemous might be a game in which you return to the same areas a few times in order to reach items or hidden paths that weren’t available to you the first time, but the rewards for these are satisfying enough that it doesn’t feel like a chore. There’s also a variety of useful attack spells, and Sword Hearts which you can equip directly to the Mea Culpa, which unfortunately I didn’t use as they always seemed to increase one of your attributes at the expense of another, i.e. killing enemies heals you, but bile vessels are less effective, or making it harder to parry, but easier to critically counterattack when you do.

You’ll need all of these advantages if you want to survive the game’s beautifully brutal bosses. The fights are original, unnerving but not off-putting, and consistently strange, like the gigantic exhumed skeleton of an archbishop, held aloft by the arms of his otherwise unseen followers, or a man sentenced to death by burning at the stake, only to be granted immortal life by the miracle, leading him to be burned over and over until he gained some control over the fire. The boss fights are key to Blasphemous, which may lead one to think “Is that a giant blindfolded baby bleeding from the eyes and fighting the player alongside a demonic wicker worm?” It is.

The only issue, and it’s a minor one, is that the themes aren’t entirely clear. Blasphemous has two endings, which respectively further explore the themes of futility and the mindsets that lead to self-fulfilling prophecies, but it feels like something is missing, and in that regard, and only that regard, Blasphemous may not live up to its lofty ambitions. 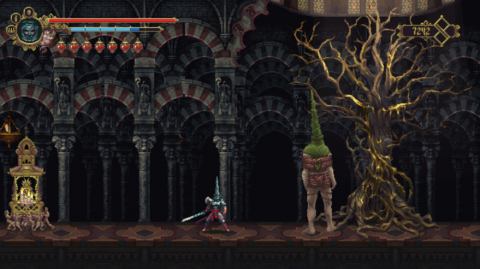 Otherwise one of the most frequent complaints is prevalence of instant-death spikes around the world. In spite of its relatively high difficulty, the save-points in Blasphemous aren’t any further apart than you would expect from any other Metroidvania, so no death is likely to cost you too much time, and it’s important in a game like this that even when you’ve unlocked all of the health upgrades, mana upgrades, and are equipped with the deadliest spells, skills and relics in the world, you still need to be careful when moving around, especially in a world as eager to kill you as Cvstodia.

The Game Kitchen are also not finished with Blasphemous by a long shot, and have already released the free DLC ‘The Stir of Dawn’ earlier this year in August, which included new cutscenes, NPCs, dialogue, shortcuts, several New Game Plus modes with their own handicaps and advantages, five new visually stunning boss fights, and a new Spanish voice dub that was originally planned, but not implemented due to budget limitations, which are no longer an issue thanks to the game’s rampant and rightfully-earned success.

In conclusion, Blasphemous isn’t perfect, but it’s impressively close. With satisfying core gameplay, intriguing religious iconography that may as well coin the term ‘Christpunk’, and a fantastic soundtrack by Carlos Viola, it’s a must-play for fans of the genre, or fans of well-designed games in general.