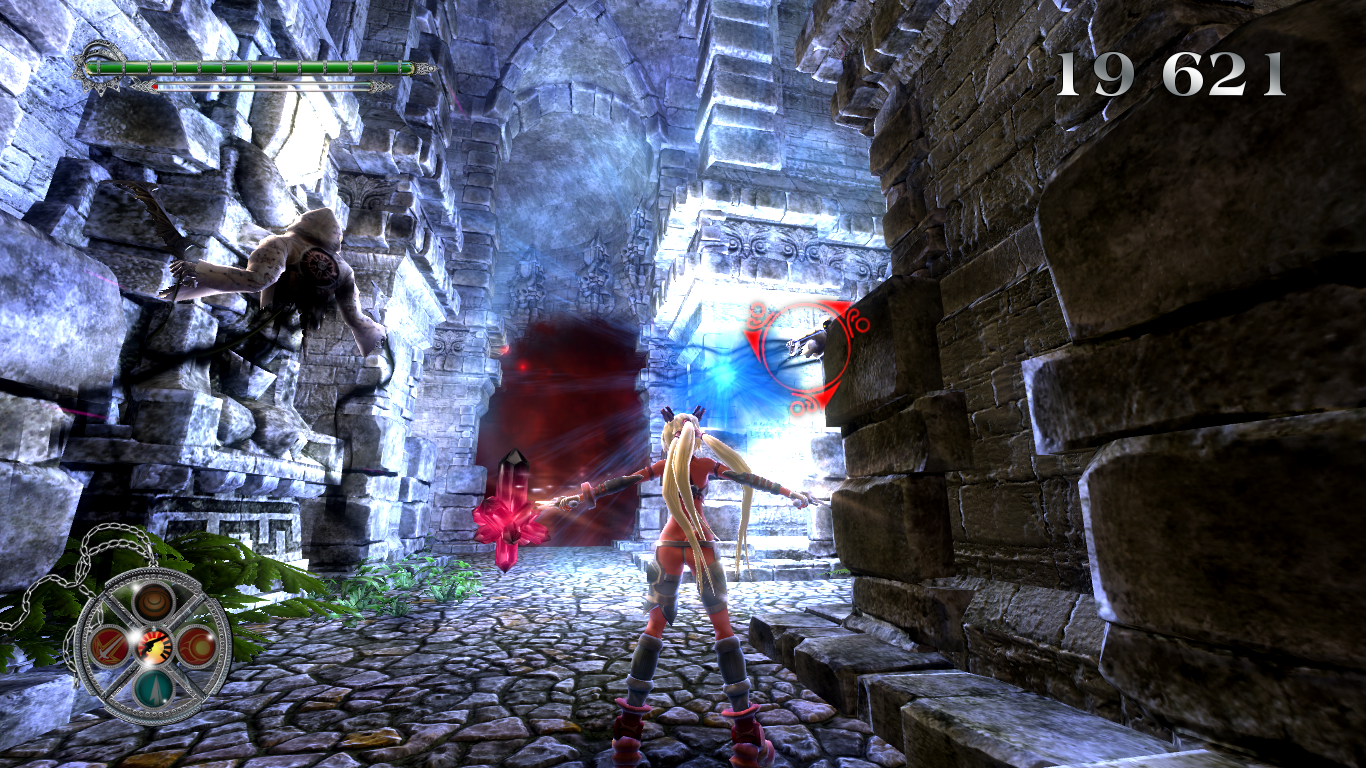 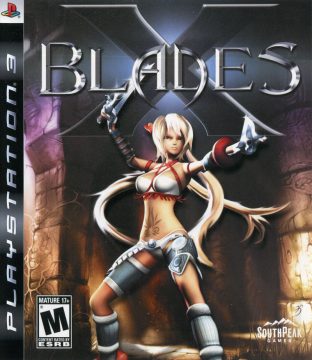 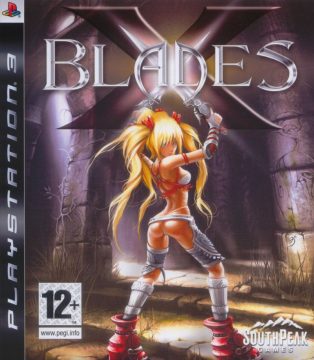 If you owned a Xbox 360 or PS3 in 2009, odds are good you have heard of X-Blades before. You probably don’t remember too much, though. It was one of those budget titles flooding the market that tended to disappear as soon as they appeared, maybe getting lucky enough to be remembered a decade later by a small handful of youtube producers obsessed with B-games. However, X-Blades has shown a surprising amount of staying power, with a fleshed out wikipedia page and the odd sight of it appearing in discussions among particularly nerdy sects of the internet. There seems to be three reasons for this: The game had an anime art style, the game was made in Russia, and the lead wore almost nothing but a few strings of cloth and a thong, leaving her butt bare for everyone to see on the cover and most ads in a “look at my butt” pose. 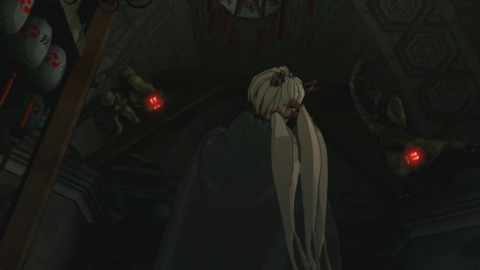 X-Blades never got the success of Earth Defense Force, mind you. The game is remembered, but it isn’t remembered that well beyond the thong, which was hilariously censored on the box in the Japanese version via adding bikini bottoms, but the in-game model still retained the extremely important thong. There are entire swaths of games from all over the world lost to time, some we can only speculate about, and yet the history of this Russian made anime girl’s underwear is well documented.

…oh right, X-Blades. It’s not a very good game. It was originally released in Russia two years before everyone else got it as Oniblade, which has as much to do with the actual game as the title X-Blades does (aka has nothing to do with the game). It was given a few worst of the year awards, and a lot of written crit around it was obsessed with the thong. We were about a decade out of Lara Croft and Duke Nukem being publicly shipped with nude art in the press, but old habits die hard. The one thing commonly agreed that this was the work of amateurs and that was indeed the case. 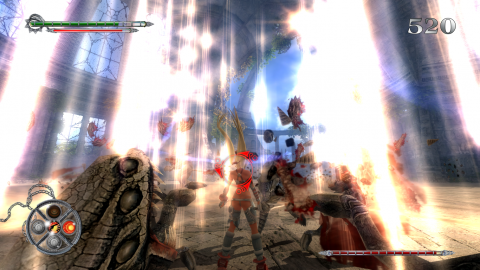 The only games that Gaijin Entertainment, the game’s devs, had released before this was 2005’s Adrenaline, a PC racing game with sim elements that seems to have mostly been forgotten (though their website does mention the inclusion of Miss Russia 2003, which is very on brand for these guys) and the even more forgotten 2003 racing shooter Bumer: Sorvannye Bashni. The fact this got a worldwide release two years later is solely because of how streamlined porting to the seventh gen consoles had become, and because there was a growing interest in anime and, by extension, attractive anime women. You laugh, but people being horny for anime characters was truly becoming industry pillars in some spaces. This was, sadly, significant.

The biggest positive X-Blades has going for it is definitely the art design. Ayumi, the heroine of the game, has an instantly memorable design beyond just her sex appeal. She has the odd triple pig-tail thing going on that flows with her when she moves, she’s given notably dark skin in a time where the medium was paler than a Dave Mathews concert. Her dumb dual gunblades are difficult to forget once you realize a dev at some point might have said “what is sword…but also gun???” 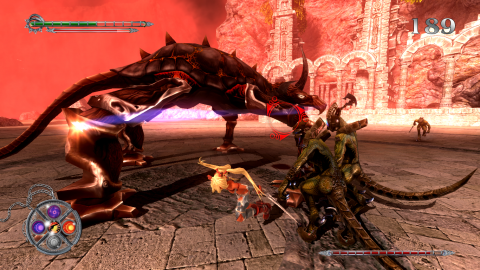 While textures and models have a very sixth-gen feel to them, there are seventh-gen effects used fairly well, sometimes in excess but not in a particularly obnoxious way (unlike most games from that era and their obsession with bloom). A lot of the monster designs are pretty cool when you can get a good look at them (especially those cloaked ghost guys who leave behind black trails), and the cutscenes have some strong moments that show a good understanding of visual language, especially in the dark goo dream. Imagine how much better those cutscenes would be if the camera would just stay still!

The music is also not at all interested in sounding atmospheric or in theme with the world or situations found within. It’s all whatever the composers sounded cool, resulting in a bizarre mix of rock, slow pieces, orchestral tracks, a bit of funk, and whatever else they wanted to try. It works surprisingly well, since you don’t really need a consistent mood when most of the game is mashing the sword button until you can press the magic button. Also, the game has an actual theme song done by an actual rock band, Golden Despite by Metaphysics. It’s nonsense, bad mid-00s butt rock and it is the best thing video game music has ever done since All Hail Shadow and With My Mind. It’s the first piece of music you hear after the back score for the opening FMV, smack dab on the menu, and it sneaks up on you with that slow build. It will render you speechless. 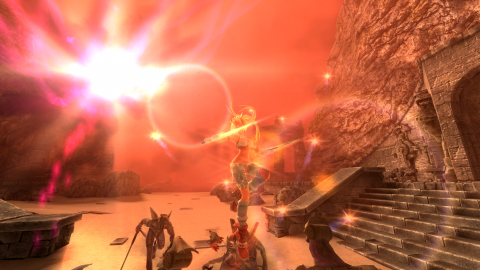 The story, while thread bare, also has some amusing details. Ayumi being a selfish treasure hunter dip who causes all of her own problems and tries to solve them via slashing at monsters is a good archetype that makes her stick out from the crown. It’s like if Lara Croft was a complete moron, but in an endearing way, the very real stakes of the story contrasting well with Ayumi’s awful way of trying to handle things. The fact they had the balls to make the good ending locked off if you ever even once bought a dark spell would be infuriating if not for how hilarious a decision that was. It’s certainly something I have never seen a game do before, but it’s also completely justified in the story. Maybe using dark magic when you’re cursed by dark magic isn’t a good idea!

The game has what it takes in its style to be something wonderfully dumb bad. You start playing and go through a short tutorial and think to yourself that this looks to be okay. Then you have a boss battle for the first real level and you’re not sure why. Then you fight an arena of monsters ganging up on you. Then you do it again, but this time with a damage sponge giant turtle with a messed up hit box who shoots homing fireballs that you first think sometimes make a u-turn behind you to hit you from behind until you see one shoot out from nowhere on the side.

Then you realize…you have forty more levels of this. Oh. God. 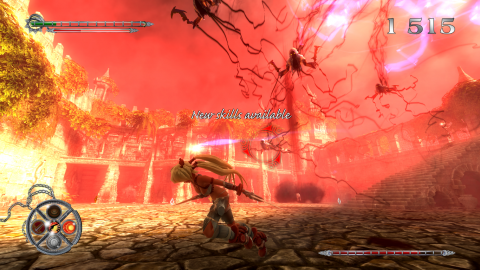 X-Blades makes a horrifically bad first impression. That’s a shame, because while the game isn’t that good, it does pick up and manages to be memorable in its own chunky, B-game way. The initial problem is that why the tutorial does cover a lot of basics, like how the blades can shoot bullets and serve a similar purpose to Devil May Cry pistols, the rage meter is poorly explained.

This is the single most important mechanic in the game, as it allows Ayumi to perform magic (which you can buy from the menu by collecting souls from enemies and broken objects). Magic is key to combat in this game because Ayumi’s swings have barely any range and almost never hit low for small enemies, and it is very easy to get swarmed and beaten down without a go to AOE problem solver. Some enemies can also only be hurt with certain magic, which has its own issues. You pick up fast you build rage by fighting and getting hit, but for moments where you can’t do that, you can also hold a button to gather rage. If I knew this was something I could do at the start of the game, it would have solved many of my issues playing it. 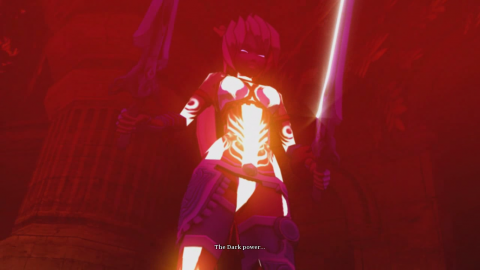 The game does have a solid foundation overall, being a hack-‘n-slash action ride, but the details are all extremely off. Ayumi’s jump is stiff and floaty, while her double jump can’t come out once you start to descend. The guns initially only have use getting small critters a bit away from you, and some of the later upgrades you get for them are pointless (like the charge shot). The swords have a range and hit box issue where neither is quite large enough, not to mention are completely worthless for any air combat (plus don’t offer a way to quickly descend). There’s not a lot of reason to save up for most spells because fireball and earthquake solve most problems easily. Most enemies just run you to you and swat you with sticks or appendages until you AOE them down and smack back to gather rage and repeat the process.

All this adds up to cause annoyance, or worse, a lack of interest. The good news is that the game does throw in new stuff every once in awhile, like a spider guard boss that punishes you for trying to melee it, and some basics are kind of fun to discover on your own. There was something oddly satisfying about finding you you can quickly gun down those ghost cloak jerks, which changed the flow of combat when they were mixed in with grounded enemies. There’s even weird nonsense like having you fight a giant version of an enemy protected by smaller guys via black lightning chains, and since more just spawns if you kill them, you have to freeze them via an ice crystal in the arena to get at the big guy. 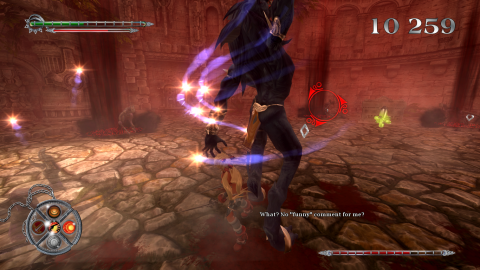 What saves X-Blades from kusoge territory is that Gaijin’s devs aren’t hacks. They went on to pretty strong careers, making a few military MMOs and flight sims, and you can see a solid understanding of game design in this early work. Environments and models are reused quite a bit, but they always try to add a new twist to each encounter, and you can feel it at points. Even the longer multi-wave arena battles feel like a test of what you’ve learned fighting these various enemies, but now they’re side by side and require you to balance the chaos. There are pieces of relics to find hidden around that grant upgrades, and the game does inform you if a room has one as you leave. This is absolutely amateur, but there is promise there that was later realized in later projects. 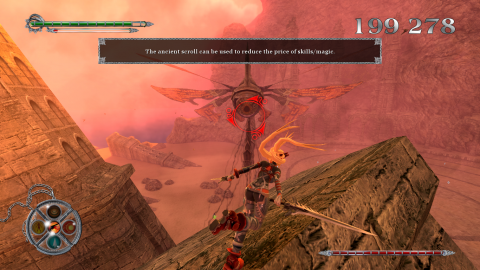