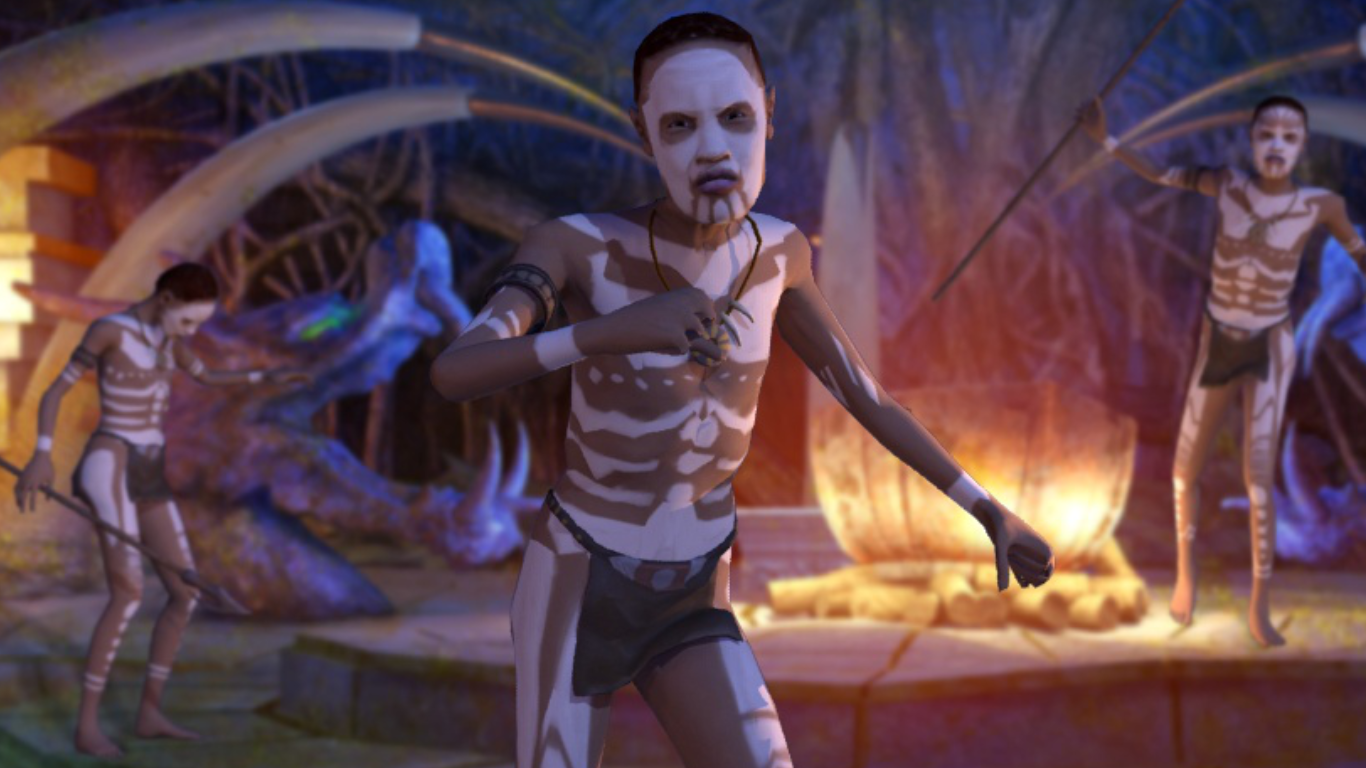 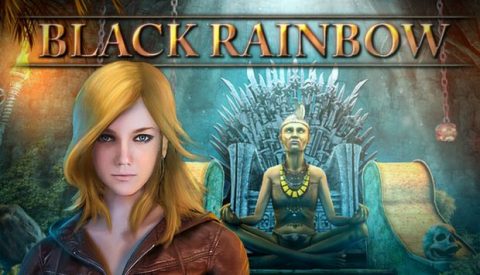 The hidden object genre is kind of fascinating because while it’s certainly lacking in depth, the formula for making a good one is so solid that everyone who’s made one has just stuck to that formula as closely as possible and at least made an entertaining distraction. You have to have a healthy collection of minigames, pretty art, and a simple narrative you can be invested in to make a bit of meat. It’s a genre mainly for those not used to point and click games, and they can be a bit more thematically engaging than a casual label would suggest, such the case for Tormentum: Dark Sorrow. The genre has potential to produce great works that needs to be explored more. Unfortunately, most developers of these games are just in to make a quick buck, and that’s what leads to disasters like Black Rainbow. Even by the middling standards of most hidden object games, this is abysmal. But how is that possible, you may ask? Simple: This game makes ABSOLUTELY NO SENSE. AT ALL. 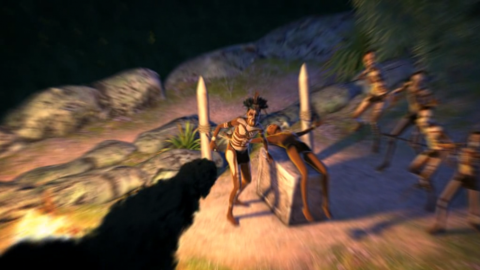 Black Rainbow starts simply enough, as we see an African tribe in the middle of a human sacrifice and then the smoke monster from Lost possesses one dude. Fire then falls from the sky as our heroine, white woman explorer Helen, gathers her things and escapes her now on fire jungle hut. Some puzzles solved and traveling around eventually leads us to learn that she is the chosen one and has to stop the dark ones, which do not have the power to read and destroy the minds of others but can possess people. She saves the world by just doing random crap literally anybody with a functioning brain could do as various characters she meet praise her for being the chosen one, those people including….hang on, got a list here… 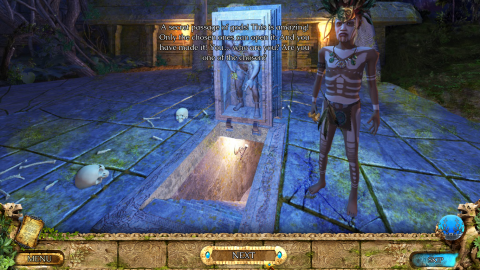 …an African tribesman who is actually a sky person, a random cave witch who gives you soup made from scorpion venom that lets you breathe underwater, shaman lady with owl, a greek philosopher smoking a pipe on Angel Island, random white lady who’s supposed to be one of the African tribe (?????), wizard dressed like a cultist, and a sea god who is living in a cave pond with his blinged out turtle. Betting most of you got stuck on the implication that the people of Africa came from Sky Atlantis. Well, you’ll be glad to know it is also canon that the dark ones are canonically responsible for the fall of the Mayan empire and various other native tribes wiped out by colonialism in real history. 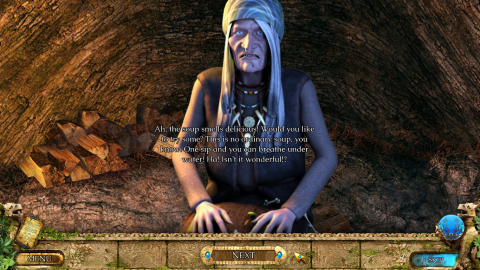 There is a single screenwriter listed in the credits for this game, which one suspects is a lie because that would imply this was a thought out narrative and not a basic plot structure filled out like mad libs. THE LADY DRANK [SCORPION VENOM SOUP] AND MET [THE GOD OF THE SEA] WHO WANTS [THE SKY QUEEN NECKLACE]. VILLAGER [EVIL LOOKING HOODED WIZARD] WANTS [DRAGON EYE] TO []. Yeah, they forgot to explain that last one. It’s hard to even be mad at the racist implications and white savior narrative baked into this pile of cliches called a plot, simply because the game just gives up halfway through and is all like “screw it, the African sky man is friends with Poseidon and Socrates.” You don’t even get a cool ending from the admittedly cool looking cutscenes, as the big climax is just rubbing to gems together to close a portal where trolls live. 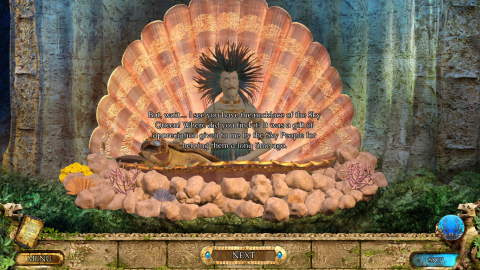 The worst part…no, the story is absolutely the worst thing. That can’t be ignored. It doesn’t even qualify as a pitch there’s so little there. But the actual gameplay doesn’t help. The entire game is effectively a two hour fetch quest, where you go around and pick up items so you can use them with things and stuff to do acts that allow progress. Granted, this is the base of most point and click games, but you need things like puzzles or narrative components to contextualize these acts and make them interesting. These are things Black Rainbow is not interested in. The minigames and puzzles on display are thoughtless, and I hope you like Simon Says because the devs sure did. The reason for doing anything after the comical quicksand segment where you get to see a frozen tribe man half sunken in dirt comes down to “because some weirdo asked you to.” There are so many magical objects to find and they don’t seem to have any rhyme or reason behind their names or even what they actually do. There is no mythology in this game, and after awhile, you start to suspect some of the art assets and character models are taken from default modeler designs. 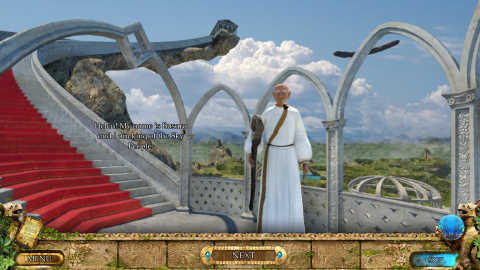 Speaking of which, the game has a bizarre FMV thing going on. All the cutscenes have a bit of compression, which is to be expected for mobile games, but this seems to extend to most character models. If a model doesn’t have an animation, it looks like they just froze a cutscene in place and placed it on the screen instead of making a model for the game itself….which may be a good thing after seeing the inhuman monster that is their sea god, given proper animation and a face that doesn’t seem to have features. Most everything else looks fine to great, but when these models don’t look bad, they just look lifeless. Take the man in the sand pit down there. 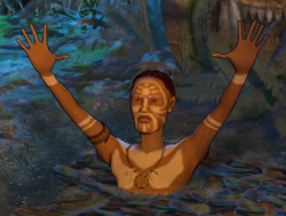 Sir, only the parts in the sand are hard to move.

It’s not cynical enough to be considered true mobile trash, but it sure as hell ain’t good in any way. Even the quality cutscenes become a negative in how they used, it’s truly baffling how something like this made it past the planning stages without at least a basic plot or theme. Black Rainbow is a collage of ideas for other games smashed together to make a product and trick out some quick bucks with pretty colors. When you have managed to make a genuinely bad hidden object game, something has obviously gone wrong in development.