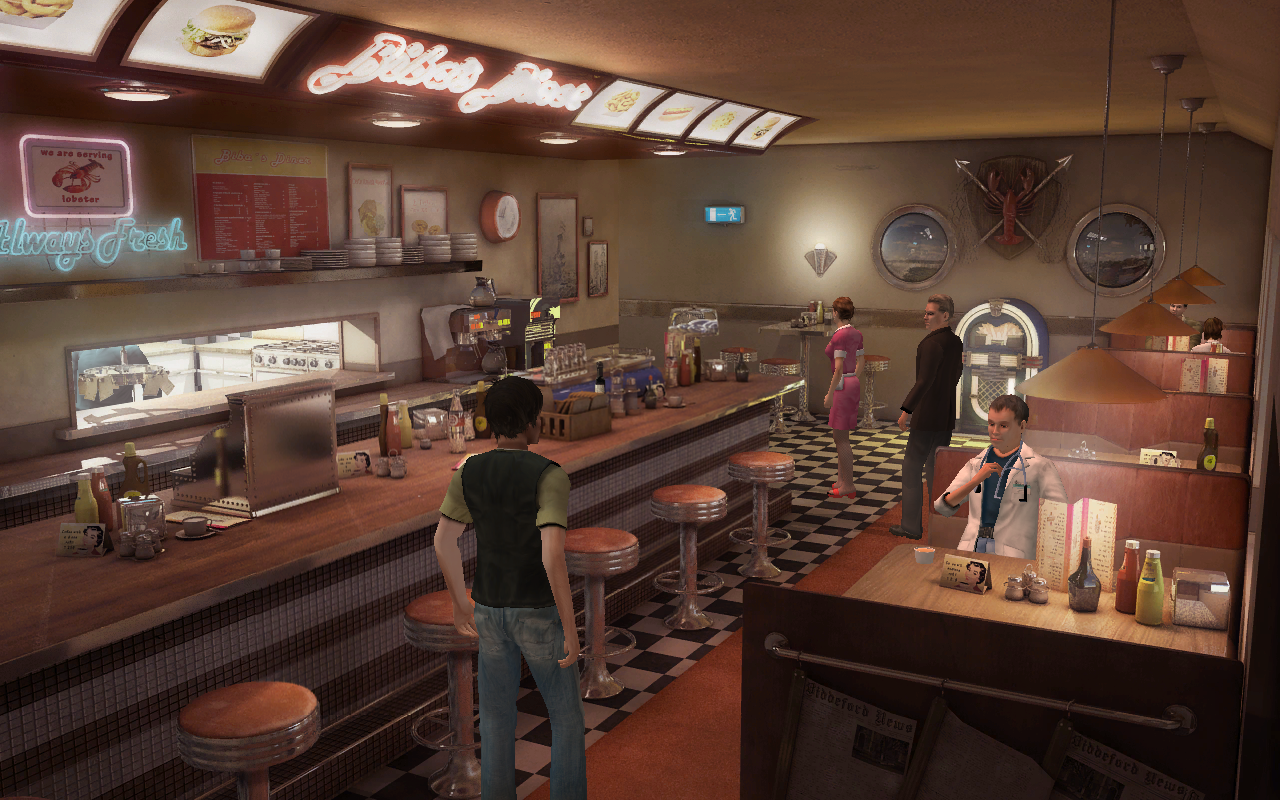 The first sequel to The Black Mirror came out six years after the original. It was developed by the Hanover, Germany-based Cranberry Production, formerly known as 4Head Studios. The second and third games are probably the most competently made and enjoyable of the franchise, with a full studio behind them this time rather than a team of only five people. These games fix a lot of the awkward design choices from the original and make for a much more streamlined and engaging experience. They build remarkably well off a premise that wasn’t intended to be expanded and didn’t seem to have much potential for it.

Black Mirror 2: Reigning Evil takes place in 1993, twelve years after the original game, and introduces us to Darren Michaels, our new protagonist. He lives with his mother in the small New England town of Biddeford, Maine. A physics student and camera geek, he works in a photography studio run by the lecherous Mr. Fuller while on summer vacation. 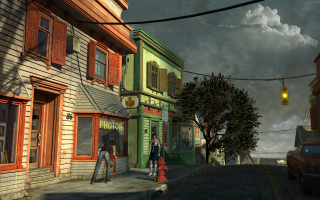 One bad thing happens after the next: First, Darren’s mother lapses into a coma, then Fuller is mysteriously murdered, and then as soon as he meets a beautiful English woman named Angelina, she’s blamed for Fuller’s murder. Darren investigates Fuller’s death and attempts to prove Angelina’s innocence all while dealing with the fact that his mother probably isn’t going to make it. His adventure soon ties back to the small town of Willow Creek in England, and a series of murders that occurred there twelve years ago.

The first thing that must be addressed about Black Mirror 2 is the new protagonist. Darren is a bit divisive among fans. Some players say he basically ruined the game for them, while others are more forgiving. Voice actor Tony Babcock’s heavy Bah-ston accent can be a bit overbearing for one thing. Darren is kind of a jerk too, though believably so for a pretentious college student. And unlike Samuel Gordon, the people around him aren’t all his servants or class inferiors, so whenever he’s insulting, snarky or sarcastic to someone, they tend to give it right back to him. Which is better than being an asshole and receiving deference in return. Plus that initial standoffish attitude mellows as the game goes on, a necessary step in his character development.

The story effectively builds off The Black Mirror and rewards fans with returning characters and locations. The twists can be seen coming from a mile away (you’ll never in a million years guess who Darren’s father is), but there’s a twist within a twist later on that isn’t totally expected.

The narrative, though, like the first game, is really background for the atmosphere. The Black Mirror sequels successfully lean on their sense of place to make for a lovely, immersive experience. 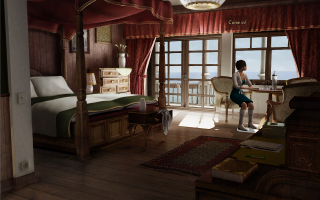 You spend a good half of the game in Biddeford, which is a quiet, pleasant tourist trap, a far cry from the damp and morose locales of Willow Creek. So it feels less like a horror-tinged Gothic mystery at first and more like a small town detective thriller. At least for a chunk of the game. The enemies are more clear-cut, the stakes are less cosmic, and everything generally doesn’t have that feel of ancient curses and decaying ruins. Still, there’s a wonderful uncanny edge to Biddeford as you explore and learn more about it.

The sequels stick to relatively contained locations. You walk through them over and over, seeing what’s new, and they stand out by offering gradual changes over each chapter. The backgrounds are great, improved by subtle variations in the environment. The weather and time of day change as you progress, making the world feel a little more dynamic than you might expect from mostly static backdrops over basic 3D models.

Simon Fuchs, one of the environmental artists on the game, who around the same time also worked on more graphically intensive games like Crysis 2 and The Guild 2, told 3D Creative magazine in its July 2011 issue about the advantages of 2D pre-rendered backgrounds.

“Environment art production was fairly straightforward [on Black Mirror 2] since the background plate was a flat 2D image file that is always seen from the same angle,” Fuchs said. “This simplified many things since you could treat the entire scene like a matte painting or a movie set, not having to worry about technical aspects. Anything that was not visible from the camera perspective did not need to be modeled and you could paint on the final image in post-production, easily modifying the look and feel of the scene.” 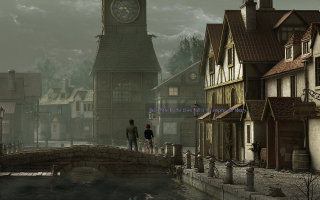 The Black Mirror sequels look and feel a lot like Jane Jensen’s Gray Matter. So, beautiful, evocative backgrounds over somewhat stiff and unremarkable 3D character models. The models are a lot more lively than the original Black Mirror though. They have more elaborate animations for one thing, like one voiceless sequence toward the beginning when Darren walks into a diner, a guy bumps into him, and Darren turns and makes a “What the hell, man?” gesture as the man continues walking.

There is one very significant feature in this game that makes it much easier than the original: The space button reveals all the hotspots. This, plus double-click fast travel and excess hotspots being erased after you no longer need them (as in the first game), make the sequels so much more intuitive than they could have been. They also remove the unnecessary left click to interact, right click to examine feature, consolidating everything to the left click.

Darren keeps a journal, which is instrumental in keeping track of your progress. It also helps give him a little more internality, since everything written in the journal is written from his point of view.

Insta-death scenarios reappear here, but they are graciously prefaced by an autosave. 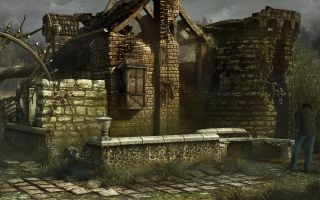 Black Mirror 2 has easy and normal difficulty options that are largely the same, except easy mode gives you additional hints and the ability to bypass the logic puzzle-based minigames.

The puzzles themselves are rarely challenging, but they’re intuitive and clever enough to send the player along. More often than not they’re simple item combination puzzles or a matter of going back and forth talking to different people. You also have your standard adventure game fare: a sliding picture puzzle, a “mix-and-match facial features to identify a suspect” minigame, some safecracking, a lockpick puzzle, and everyone’s favorite “press buttons with symbols on them in a certain order according to a cryptic message you find nearby” puzzle.

You can unlock minigames as Easter eggs by taking photos of various items, but this has no bearing on the plot.

The second game moves slowly and then ends abruptly, leaving no question of it being intended as the middle chapter in a trilogy. But the second and third games are long enough that they don’t feel like one long journey split up to sell more copies. Both sequels took about eight hours for this reviewer to finish, a reasonable length for a point-and-click adventure game, especially since neither felt too padded out.

A bit about the developers: 4Head was acquired by dtp entertainment in 2007 and reformed as Cranberry. Its first game under this moniker was Mata Hari, inspired by the eponymous World War I spy. This was released in Germany in 2008 and is remarkable mainly for the involvement of LucasArts alumni Hal Barwood and Noah Falstein. 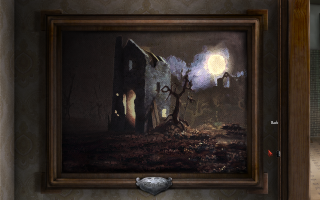 Cranberry then went on to make the Black Mirror sequels in 2009 and 2011. It released its last title The Lost Chronicles of Zerzura in 2012 before dissolving. Unlike Future Games’ ludography, Cranberry’s games are easily accessible on most gaming clients today.

In 2013, Cranberry was acquired by Deck13, another Germany game development company. Deck13 is probably best known for co-developing the Souls-like Lords of the Fallen. It reincorporated Cranberry into a subsidiary studio called Deck13 Hamburg in 2015 and relocated it, of course, to Hamburg. Deck13 Hamburg mostly develops online and simulation games like the TransOcean series, a shipping company management simulator.