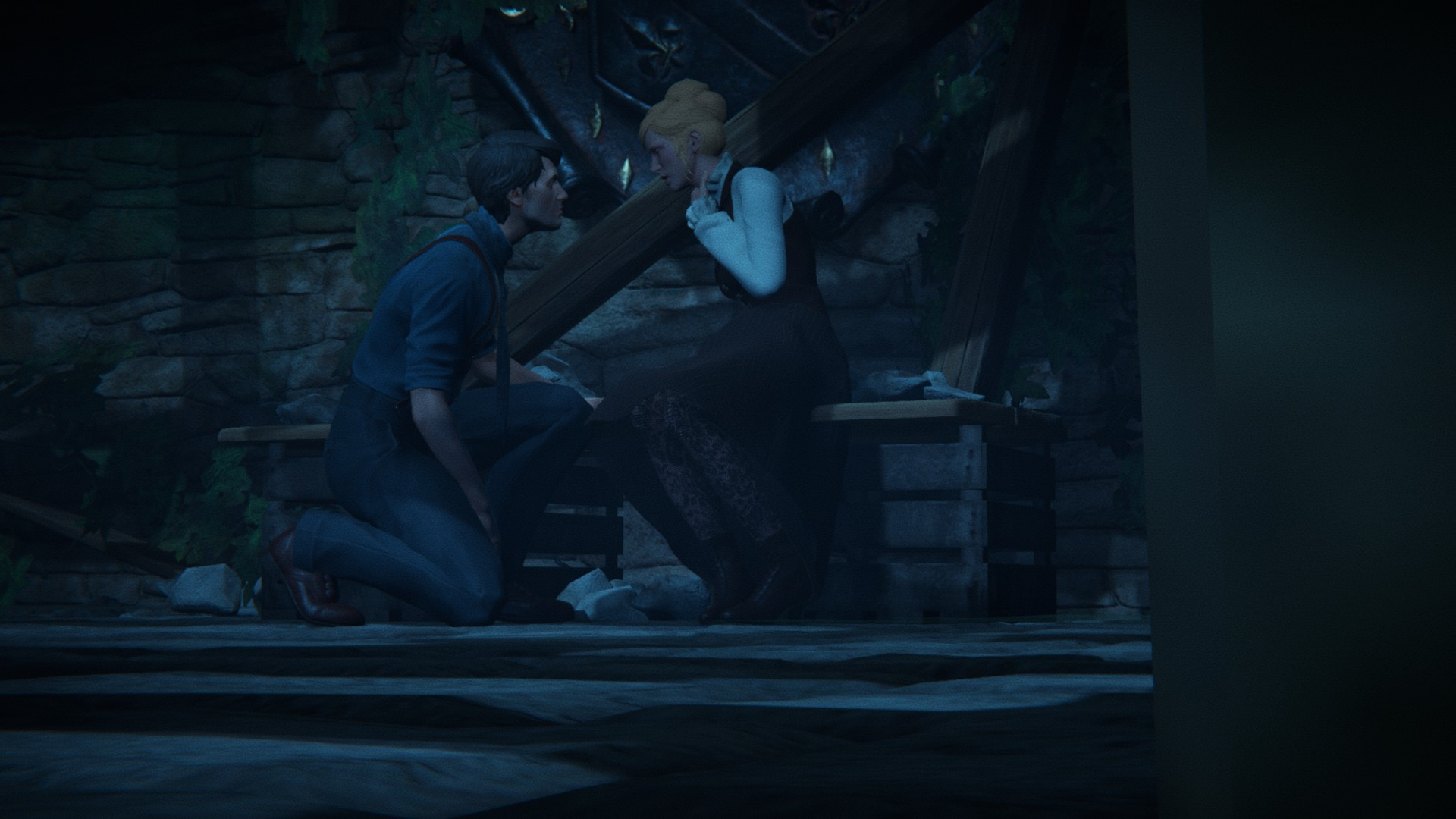 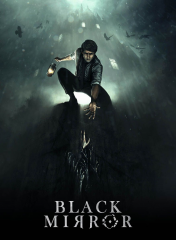 Despite the clunkiness of the first three games, King ART Games’ 2017 reboot of the Black Mirror franchise is by far the worst of the bunch. It’s quick and moody enough that it doesn’t feel like a chore to play, but it’s still an odd, broken, rushed mess without much story or gameplay innovation to speak of, squandering the potential of reinventing Black Mirror series set pieces.

The reboot was published by THQ Nordic, which purchased The Adventure Company in 2011 and presumably gained the rights to the Black Mirror franchise. It handed development over to King ART Games, a German studio best known for its well-received The Book of Unwritten Tales series. Its only other adventure game, The Raven: Legacy of a Master Thief in 2013, received middling reviews and was criticized for many features that show up in Black Mirror: Glitchy movement and clunky execution being the main ones. It hasn’t developed another adventure game since Black Mirror, only putting out the real-time strategy game Iron Harvest in 2020. 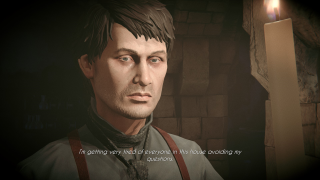 Some series alumni show up in the development staff for this game despite the new studio: The creative director Jan Theysen, who holds that title for almost all King ART games, did writing and design work on Black Mirror 2; and Achim Heidelauf, who directed, co-wrote, and co-designed the second game, also produced this one.

Black Mirror uproots series continuity to start its own narrative. It still centers on the Gordon family, its ancestral estate, and the dark forces at play there, but shifts the setting to Scotland in 1926. The Black Mirror Castle this time around is in the Scottish highlands, on the coast, giving it a nice blustery, wind-swept feel in contrast to its land-locked predecessor.

Much like Samuel, our protagonist David Gordon visits his ancestral home following the suicide of an elder relative. This time around, it’s his father rather than his grandfather – though both are named William. Unlike Samuel, David has never once stepped foot in the castle. As he meets his relatives and learns more about his lineage, he begins to uncover a sinister history of madness and murder among all his male ancestors. 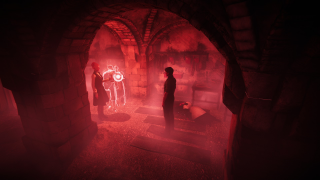 If anything, at least Black Mirror‘s story is more straightforward than the first game. David is also more sympathetic than Samuel, a clear fish out of water who tries to be an upright and moral person despite certain murderous tendencies in his family history. Though it does away with all the Marcus and Modred business of the trilogy, the story blends some intriguing Celtic folklore into the series mythos. Without much effect, but, hey, it tried. And unlike the original Black Mirror, this one actually features a black mirror.

In general the voice acting and characters aren’t bad. They just aren’t very distinct either, and the writing falls apart more and more as it goes on. Like there’s a part in the latter half where a guy gets stabbed clear through the chest and David asks “Are you hurt?”

The game tries to add some more humanity by giving David a sidekick: Leah Farber, a young doctor who treated William. But she isn’t given much to do in the plot other than help David out of various scraps, and ends up feeling extraneous.

Like previous games, the story is a vessel for the atmosphere. And at least that’s solid. 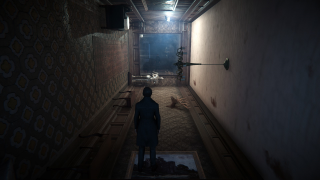 The weakness of the graphics comes through particularly in the character models, which just look uncanny. Either too craggily or too plastic-smooth. At one point a character gets blood on his face, but there’s a glitch in the facial model so the head moves but the blood stays in the same place

The setting and background, aside from the occasional graphical glitches, are pretty nice, especially the outdoor environments. Despite some cliches in the approach, Black Mirror games have always had a wonderfully evocative mood – shown best through mist, rain and cold stone – and this reboot is still filled to the brim with it. The music is all wonderful too and helps hone the mood further. You’ll probably have to turn the gamma up all the way though, because it’s an extremely dark game on its native settings.

King ART tried to make this more of a Telltale-style game than its point-and-click antecedents, but without any branching arcs it misses the appeal of that form. There isn’t even that much dialogue. Nor is there much to speak of by way of puzzles, positioning Black Mirror in an odd no-man’s land between gameplay styles. It ends up feeling like a whole lot of nothing, an empty experience of quick-time events and clunky investigation sessions.

Aside from a rolltop desk that you spend a chunk of the first chapter fiddling with to unlock its various compartments, there aren’t really puzzles. One recurring trick has you unlocking doors with a master key with rotating parts. It’s a matter of making the key match each keyhole, an only slightly more evolved version of that toddler game where you match shapes with holes. There’s also a litany of torn photo puzzles, only one of which is essential for the plot. The others are found by collecting them throughout the environment and accessing them in the main menu. Solving them reveals concept art. 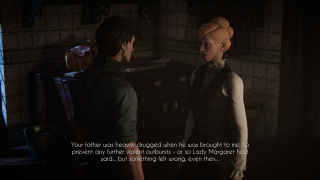 Toward the end, there’s also a puzzle that requires you to press a few symbols in a certain order to advance. The game wants you to solve another puzzle with a globe, which then opens up to reveal the order of the symbols, but nothing prevents you from figuring out the order by trial and error since you only need to click on three buttons. It just feels sloppy.

Insta-death scenarios come back in frustrating form. David has recurrent visions with ghosts, which replay over and over until you examine certain portions of the room. But if you stand too close to the visions for too long, a ghost will find a way to kill you. And for the first time since the original game, there is no immediate autosave before instant deaths, so you’ll have to start back from when you last saved manually or when the last autosave occurred. Usually this isn’t too far behind, but it’s a nuisance in a game that doesn’t really need instant death.

This is made worse by the clumsy interactivity. Controls appear to be made for a joypad, but it doesn’t feel right with a controller or with mouse and keyboard. It’s a weird hybrid that offers the worst of both worlds and makes exploration tedious. The camera moves semi-automatically, with angles only sort of fixed and otherwise moving slightly according to the player. Interactive items have hotspots that shows up when you get close enough to them, but they’re finicky to position David right so they trigger. It’s also inconsistent with where hotspots occur. Some doors and entryways have a hotspot to key you in that this is a way to get to the next area, but others don’t have them. 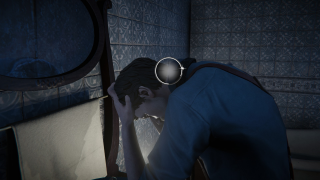 The way David interacts with his environment is also just plain weird. His comments don’t give the player much to go on. For example, at one point you see an item on a table, and David says “That’s interesting.” Nothing else. You’re given no more cues for what it is or what to do with it. In the end, it’s completely unnecessary. Talking with Leah is supposed to cue you in on what to do next, but even her replies are vague. And it’s redundant since you already have a diary and objective list.

So no puzzles, exploration is a chore, and any impression of choice (like at the beginning of the game when you’re prompted to tell the truth or lie about something) are quickly revealed to be an illusion.

Black Mirror is the shortest game in the franchise, clocking in at barely six hours long for even the most drawn-out play time. It’s a good length for this type of game, to be honest, but the pacing isn’t right. The game’s five chapters rush into a conclusion well before the player has had time to get a feel for the world and the characters.

Reviews for the game, even among adventure game communities, were mixed to average across the board. Czech fans of the original game were critical because the reboot was never localized there like previous games.

Black Mirror isn’t unplayable trash like some Steam reviews posit, but it’s equally hard to defend. It simply doesn’t feel like a finished product, and it’s a disappointing place to leave the series.