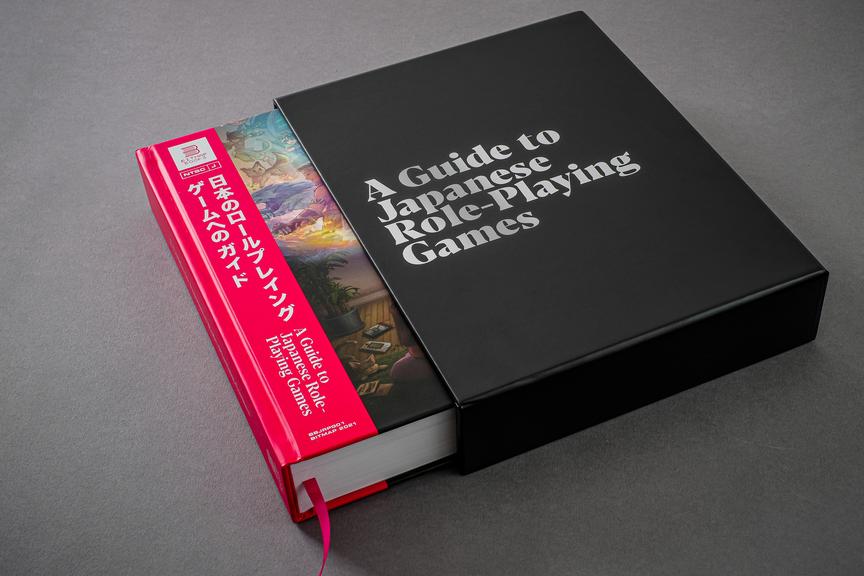 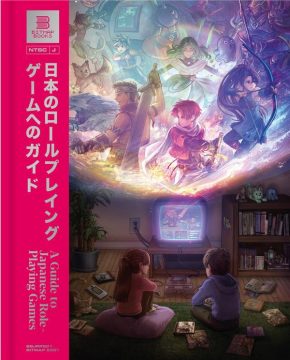 It’s been in the works for over two years, but A Guide to Japanese Role-Playing Games, published by Bitmap Books, will finally be available tomorrow, June 25. The regular edition is £34.99 and the limited edition is £54.99, the latter of which includes a slipcase, a poster of the gorgeous cover artwork by Stephanie Sybydlo, postcards of the original pixel artwork by Army of Trolls used for the chapter breaks, and a USB key with demos of several upcoming indie JRPGs. You can order it at https://www.bitmapbooks.co.uk/products/a-guide-to-japanese-role-playing-games.

Bitmap Books is located in the United Kingdom but they ship to many other countries, including the United States and Canada. It will be available directly on their site at launch, but copies will eventually be made available on American and UK Amazon sites. Please note that since we didn’t publish it, it is not available through our Patreon nor can it be purchased through itch.io.

Since we’re on the eve of release, I thought I’d write a little bit about the planning of the book, its contents, and how it all came together.

The book is similar in format to the CRPG Book that Bitmap Books published back in 2019. This JRPG book comes in at a total of 652 pages, and seeing as there are well over 600 games, each game typically gets about a page of coverage. This comes to about 500 words in length, though some of the more noteworthy ones get two pages, while other minor titles get a half-page. A few people have asked me if these are the same as the HG101 write-ups, but nearly all of them are completely original due to the different format. Also, while I helmed the project and wrote quite a number of the reviews, the book is ultimately a collaboration of the work of more than thirty authors, whose work has appeared on sites like RPG Site, RPGFan and Operation Rainfall.

The goal of this project was to provide something that would be of interest for all types of RPG fans. For those just dipping their toes into the genre, it highlights all of its most significant games, and the ones that are the most essential to check out, For those who occasionally dabble with them, or have treasured memories of playing SNES or PlayStation games in their youth, it should help stir up buried memories and give a glimpse of what you’ve been missing in the meantime. Longtime fans might be familiar with all of the major (and some minor) names, but we really did a lot of legwork to uncover a lot of unique and interesting Japanese only titles, so it’s basically guaranteed you’ll come away from this book learning something new. 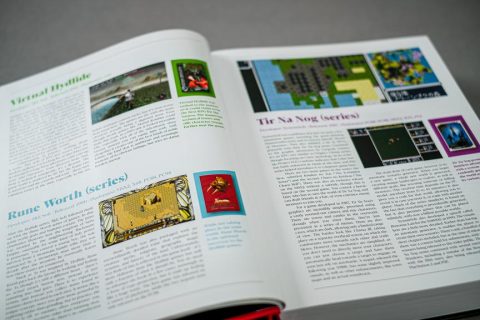 Of course, there are tons and tons of JRPGs out there, and we couldn’t possibly cover all of them. But we focused on all of the franchises and most of the more interesting titles – I’m sure there will end up being some obscure, worthwhile games that we ended up missing (and there were a couple we had to cut for space), but for the most part, most of the stuff we omitted was because they weren’t terribly noteworthy, like so many tepid Dragon Quest clones and hastily assembled 16-bit CD-ROM games.

As for the book itself, it’s divided up into several chapters, the first of which includes a handful of introductory essays, including a breakdown of all of the major elements of a Japanese RPG and a broad history of video game role-playing games in Japan. Other topics include music, localization, anime/manga tie-ins, and even an examination of why killing God is such a prominent trend in these types of the games. There’s also a brief gallery that shows some of the remakes over the years, like comparing the versions of Final Fantasy, Dragon Warrior/Quest, Phantasy Star, and a few others.

The meat of the book is the catalog of games, starting from 1980 and moving all of the way through 2020. Dragon Quest is considered the genesis of what we know as the Japanese RPG, but there were plenty of other games that predated it, mostly on computers, and this section focuses on those, consisting mostly of early efforts from companies like Xtalsoft and Koei. Falcom also played a huge role in this period, with titles like Dragon Slayer and Xanadu, so all of their games are featured here together as well, including series that are still alive today like Ys and Legend of Heroes. The genre was still finding itself in its early years, in some cases referring to itself as “simulations” rather than “role-playing games”. Many of the titles in this period are similar to Western games, with a palpable influence from games like Ultima, and games like this still continued for quite awhile even after Dragon Quest. This section also covers Tower of Druaga, even though it’s an arcade game rather than PC game, though it definitely qualifies as an RPG. 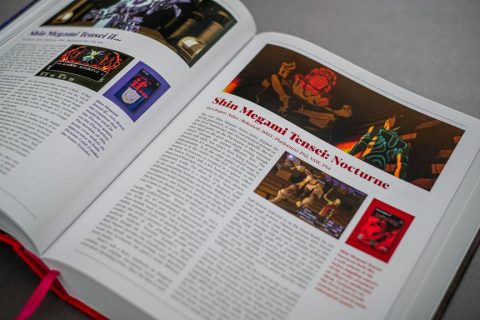 The next few sections focus on the major franchises – Dragon Quest, Final Fantasy, Shin Megami Tensei (and Persona), and Tales. Most of the major entries in each of these series are covered, as well as some of the spin-offs where relevant. This is followed up with looks at all of the other major franchises – Mother/Earthbound, Suikoden, Shadow Hearts, Lufia, Star Ocean, Breath of Fire, and so forth – along with many, many one-off titles. There are also plenty of franchises in here that never (or barely) left Japan, like Glory of Heracles, Metal Max, and Tengai Makyou.

The definition of “Japanese RPG” is pretty broad, and so there are several sections that cover its many subgenres. Firstly, there’s the action-RPG – while there’s long been debate over whether the Zelda series counts as an RPG, it set the template for a large number of subsequent games, and it’d be silly to not include it. This section also features the Secret of Mana/Seiken Densetsu series, Kingdom Hearts, all of Quintet’s 16-bit output, and many others. Also included here is a section of the Soulsborne games, like Dark Souls and Bloodborne.

This is followed up by a section on strategy-RPGs. Though strategy games existed in Japan through the 1980s, it was Nintendo’s Fire Emblem that integrated RPG elements closely to its structure, so that marks the genesis for the games covered in this chapter. Other games include Ogre Battle/Tactics Ogre, Final Fantasy Tactics, Front Mission, Valkyria Chronicles, and lots of other smaller games in the 16 and 32-bit eras.

Next up is a section on rogue-likes. While these have only recently become popular in the West thanks to indie hits like Spelunky, it’s been a pretty consistent thing over in Japan, largely thanks to Chunsoft’s prolific Mystery Dungeon series. This section untangles the web of that series, along with a few other games that predated it, and a handful of others, including Konami’s Azure Dreams, one of the first of its type to see international release.

Then there are the first person dungeon crawlers. All of these have their roots in Wizardry, and so they tend to play more like that game than “traditional” JRPGs, but they also have unique aesthetic and gameplay styles. The Wizardry property continued on in Japan long after it faded away in North America, plus there are several other games from the genre’s revival thanks to Atlus’ Etrian Odyssey, and includes other games like Zanki Zero, Labyrinth of Refrain, and Elminage. This section really isn’t too long, largely because there’s actually another book in the works devoted totally to the genre, which is absolutely going to be worth checking out.

And then there are all of the monster collecting games, which technically have their origins in earlier titles like Megami Tensei and Dragon Quest V, but were more widely popularized as a subgenre thanks to Pokémon. Other games included here are Yokai Watch, Robopon, Medabots, and a handful of others. 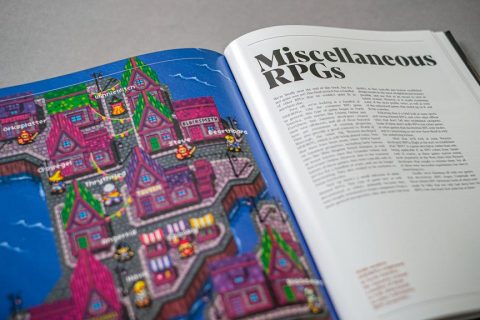 Finally, there’s a general “miscellaneous” section for all of the other games that didn’t fit anywhere else. This includes a brief look at MMORPGS (which tie into other main franchises), some adult games (most of which were either unlicensed or originated on PCs), some unique genre hybrids like Square’s Racing Lagoon, and some Western-developed Japanese-style RPGs, beginning with games like Anachronox and Septerra Core, going up through some modern indie games.

All of the major contents of the book were completed back in July 2020, with final tweaks being made up until the very beginning of the year, so it doesn’t feature any of the most recent stuff. Personally, one of my favorite JRPGs of the last few years is Yakuza: Like a Dragon, though since it came out so late in 2020, it only got a brief mention in a larger section on the whole Yakuza series in the action-RPG chapter.

Between myself, all of the contributors, and the wonderful staff at Bitmap, we put out all into this enormous book! It was honestly pretty stressful to put together, especially so much of it was done during the pandemic lockdown, but it’s incredibly gratifying to see it come together, and I think it’s an absolutely incredible book. I hope you’ll enjoy it too!