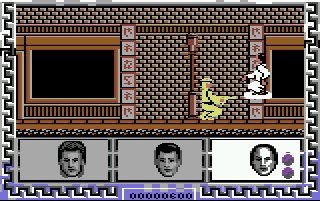 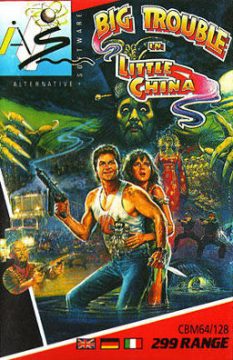 Kurt Russell is a phenomenal actor, starring in various comedies in the 1970s before making a string of awesome action films during the 1980s. John Carpenter likewise is legendary as a director of gripping horrors and thrillers. Putting these two men together resulted in the cult classics of The Thing, Escape from New York and Big Trouble in Little China. We defy anyone to watch all three and not glean enjoyment from them, BTiLC stands out especially for its blend of comedy and hilarious one-liners, high-flying kung-fu, epic gunplay, great special effects and animatronics (for the time), and an unmatched tongue-in-cheek atmosphere. Making a video game from such a rich source material should have been easy.

Except the BTiLC game, released across three 8-bit computers and nowhere else, is not only a travesty in gaming terms, but its lack of ambition is utterly astonishing. Often a terrible film-to-game adaptation will at least have some kind of wacky shtick to amuse you – like absurd plot deviations, or strange enemies and goals (like Rambo or Back to the Future 2 on the NES). BTiLC though, instead of trying to match the fantastic silliness of the film, seems to have been coded over a weekend by a guy who never watched the film, and consists solely of shuffling from right to left. 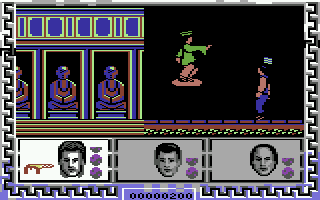 There are three “levels”, plus a fourth which palette swaps the statues from level three. The backgrounds scroll jerkily and repeat so often you could fit their entire range on a single screen. The levels don’t affect gameplay, except on level two where that dragon monster appears from doorways. You control Jack, Wang and Egg, except Egg doesn’t even have a walking animation and just floats along. Occasionally an enemy appears and the two guys in the back run away. Fighting is slow and cumbersome; outside of battle you can switch characters, but all three are crap. Every thousand points or so you get weapons, but it doesn’t improve things. If you can walk from right to left and survive for 15 minutes you reach Lo Pan, who seemingly can’t even be defeated! Even if he can it doesn’t matter, there is no ending screen on Earth which can redeem such abject mediocrity.

The C64 version is colorful but the sprites are chunky. The ZX Spectrum ups the resolution but suffers from the expected lack of colour. The Amstrad version appears to be a cheap port from the Spectrum. Outside of the title screen none of the versions have any music, and the sound effects suck. There were hundreds of great games released for these computers, so the epic laziness is shocking – was it perhaps on purpose? What’s worse, is that a genuinely great film never got (and probably never will) receive the game adaptation it deserves.