Westone’s Wonder Boy series is a completely disorganized mess. That being said, it also contains some of the best action-adventure games ever crammed into two dimensions. The second game, Wonder Boy in Monster Land was a strange beast, as it attempted to fuse together action-platforming with RPG elements. It also indirectly gave creation to Whomp ‘Em, a technically original game by Jaleco whose ties to Wonder Boy are twice removed. This is where it gets confusing: Whomp ‘Em is actually a sequel to Wonder Boy in Monster Land, albeit not the version with which most are familiar. 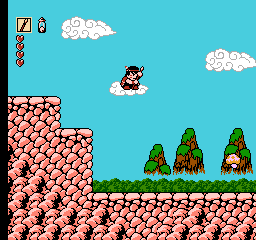 Aside from its initial release, Wonder Boy in Monster Land was also released on the PC Engine as Bikkuriman World (based on Japanese stickers), and even remade on mobile phones as Super Adventure Island to further confound the link between the two series. Amidst this was Jaleco and NMK’s port on the Famicom known as Saiyuuki World, a massively altered rendition in which the protagonist is none other than Son Wukong (or Son Goku), the Monkey King protagonist of the classic Chinese story, Journey to the West. You’ve likely seen the character used in games before, ranging from the good (Son Son) to the awful (Super Monkey Daibouken), but nobody knows why he became the protagonist of the 8-bit Nintendo port of a game already released several times. Perhaps NMK and Jaleco were unable to acquire the license proper, so they completely altered the graphics (having characters like dragons and Buddha statues as shopkeeps) while keeping the gameplay essentially the same. The port was not particularly great due to awful music and increased enemy difficulty, but it serves as one of the more bizarre watermarks in the already monumental turbulence of Wonder Boy‘s release history. 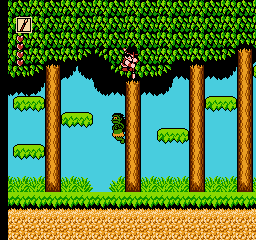 Since they apparently owned the copyright, Jaleco was able to release a sequel, Saiyuuki World 2: Tenjoukai no Majin. Perhaps with Journey to the West being public domain and all of its characters up for grabs, an original sequel could still be based off of a clone game so long as it plays significantly different from its predecessor. Thus, Sun Wukong takes up his Ruyi Jingu Bang (his magic size-changing staff) and sets forth to kick butt with gameplay vaguely reminiscent of Wonder Boy but somewhat closer to Capcom’s Son Son II on the PC Engine, and even with some Mega Man elements thrown in for good measure. Saiyuuki World 2 was quietly released to the Western Hemisphere, but with the East Asian mythology likely to go unappreciated by North American gamers, Sun Wukong would be transformed into a Native American hero named Soaring Eagle, making for one of the very few Native American protagonists in any given video game. The game was re-christened Whomp ‘Em, a horrible pun deriving its name from Native American wampum shell beads. 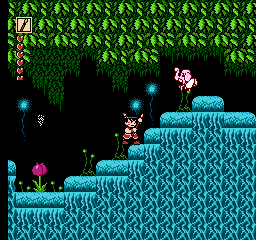 Whomp ‘Em‘s story is solely listed as a manual blurb, as it tells you that Soaring Eagle is “seeking totems for his magic pouch”. There’s also something about a gigantic statuesque demon threatening to do evil by the looks of things, but the point is that you’re out to kick ass and take totems. The graphics are bright, colorful, and yet another game endowed by the visual palette expansions offered by twilight-era NES carts. There aren’t too many dazzling visual effects employed, but there’s a good deal of detail in the backgrounds, particularly for the super-creepy ice level. 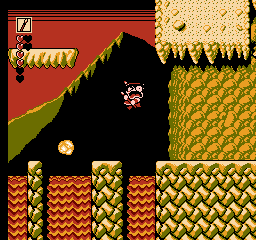 In contrast, the music is not the most outstanding factor of this game, with some tracks being quite enjoyable and others ranging from middling to grating. When it’s good (like in the Sacred Woods), it’s nothing catchy but it’s fitting to the mood, and it never really gets bad until the final level, which you will likely hear repeatedly and be driven insane from prolonged exposure to it. 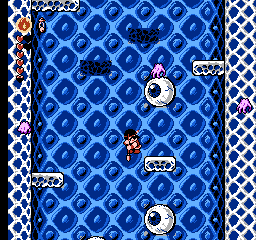 As with any game from this era, how it plays matters above all else, and it actually has a good deal of commonality with the time-honored Mega Man series. It’s nowhere near as flagrant a ripoff as The Krion Conquest, but a few elements of Mega Man seem to float around Whomp ‘Em, such as the ability to choose your level and enemies constantly dropping power-ups, most of which bolster your lifebar. Its level structure is much like Mega Man where a simple introductory level leads you into a selection of six different stages: Sacred Woods (your basic outdoors level good for beginners), Magic Forest (gloomy dark forest with poisonous liquid), Water Test (expected swimming and water waves which carry you down slopes), Fire Test (very few enemies but lots of platforms over lava pits), Ice Ritual (insanely creepy freefalling through icy caves with giant eyeballs), and Secret Cliff (TNT, spikes, and dual platforms horribly familiar to Wonder Boy fans). 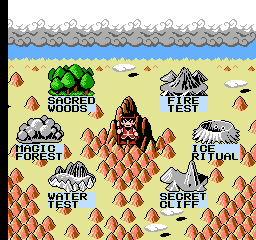 Each level is linear with lots of enemies and pits with spikes, lava, and other stuff that drains your life, but thankfully nothing that instantly kills you. However, you only have one life in any given stage, though you have unlimited continues to beat it. Your spear extends outward to attack, and you can even hold up and down while jumping to thrust in those directions, a mechanic perhaps inspired by Zelda II. 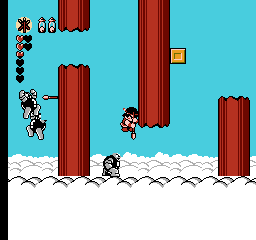 Vanquishing foes causes them to drop an item, the most common of which is the gourd. These plants act very much like the bullets from Bionic Commando, in that picking up a certain amount of gourds will permanently increase your lifebar by one heart. Seeing as how you start out with four and can max out at twelve, it’s in your best interest to pick up as many of these gourds as you can, as your current number of collected gourds and hearts carries over even if you continue. There are also small hearts to restore one segment of your life and rare large hearts to restock the whole biscuit. You can also snag a flint spear head to increase your attack power for the next four hits, the buffalo headdress to shrug off damage for the next four hits, and the deerskin shirt makes you invincible for a few seconds. 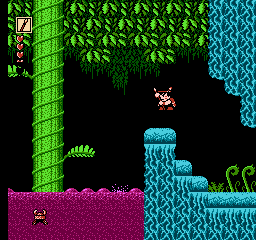 There’s also a spear power-up you can snag from slightly stronger-than-normal enemies in each level which increases the range of your spear. The best powerup you can find is the almighty magic bottle, a rarely-dropped vial which restores your life (up to six hearts) if you lose all hearts at any given point. These are the closest things you have to 1-ups, and some stages and/or bosses can be a bit tough to beat without them, so it’s a good thing they can occasionally be found hidden throughout each level. As a holdover element from Wonder Boy in Monster Land, hidden items can pop out of the air if you jump around in exactly the right place, and these items often turn out to be magic bottles or giant hearts. 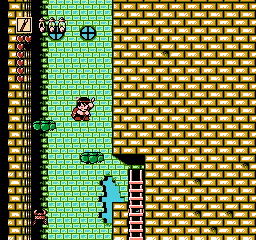 In true Mega Man fashion, beating each boss gets you a new power which you can eschew for your normal spear thrust if you so choose. Unlike Mega Man, these powers don’t run on their own energy and can be used infinitely, but they are admittedly situational compared to the practical utility of your spear stab. They regardless have their uses, like the spinning spearhead which can tear through certain structures, and the projectile darts which, while weak, provide platforms when thrown at walls. You can blast fire from your spear tip, shoot paralyzing freeze dust, create a web to snag an enemy and toss it at another foe, and conjure a cloud to use as a temporary flying platform. There’s even an ultimate power-up for when you beat all six stages: The “Death Breath”, a powerful dragon-headed energy blast which will serve you well for the final level. You’ll be needing that super-power for the finale, as the last stage is the stuff of nightmares starting with the eerie and ear-hurting music. 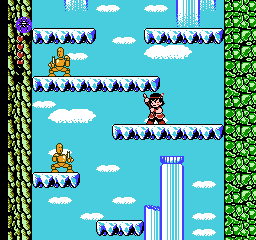 The rest of the game isn’t too hard up to that point; even if you only get one life and hence no checkpoints, none of the stages are too incredibly long. The addition of magic bottles and the ability to extend your lifebar makes it so you can take enough punishment and make it to the boss at the end of every level. Some are tricky, like the giant frogman which transforms into a stream of bubbles, and others are straightforward, like the Geodude-like black ball monster that bounces around. The fights are challenging at first but can certainly be vanquished with enough practice, and even they feel a bit Mega Man-ish, like the Wood Man ripoff at the end of the woods. 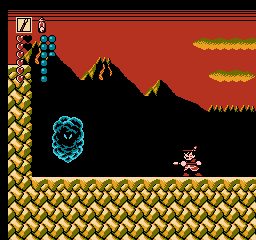 The difficulty cranks up exponentially in the finale, where in an interesting twist, the enemies you face throughout this gauntlet are all miniature versions of the previous six bosses, retooled in annoying ways and still a bit tougher than normal enemies. It is the longest level in the game as expected, there’s one segment where you float around in zero-gravity and is incredibly hard to control, and the final boss blows. For as cool-looking as it is, due to how nearly impossible it is to dodge everything and strike it, it devolves into a war of attrition that forces you to Death Breath it before he drains all of your remaining magic bottles. Still, it’s nothing impossible to beat, and the hardiest of action game veterans should be able to see the ending, of what little exists of it. 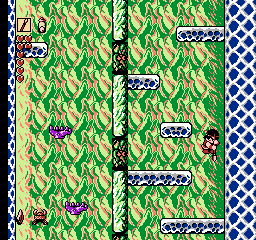 While it is arguable that the release history behind Whomp ‘Em is more interesting than the actual game, it nonetheless shines as yet another beacon for the sun-setting era of action-platformers put out for the NES in the nineties. It plays quickly, it offers replayability thanks to the level select, and it offers a good challenge all the way through which really only breaks at the super-cheap final boss. As you can likely imagine, it hasn’t gotten a lot of press coverage, not even in any issue of Nintendo Power back then save for a bit in the Top Secret cheats section. Unknown though it is, it’s still fun, tough, and emblematic of action games released around its time. 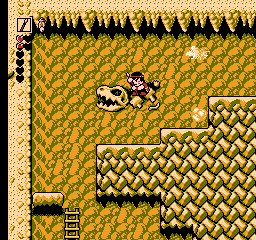 Incidentally, there isn’t too much difference between Whomp ‘Em and Saiyūki World II, with the changes only being cosmetic; Sun Wukong has his extending staff instead of a spear, the power-up items have a distinctively more Asian flair, and even a few of the enemies are different, like the brown bear midboss instead being a panda. Admittedly, Soaring Eagle kicking butt in a bamboo forest feels a little out of place, but the game’s dang good regardless of whether you’re a tribal warrior or a monkey adventurer. 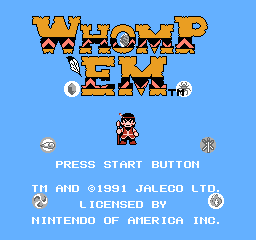 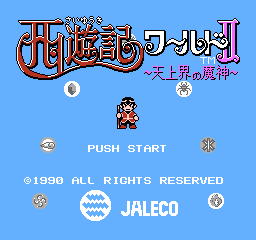 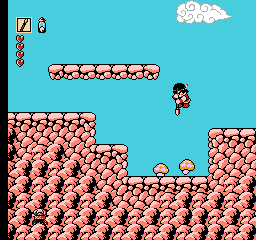 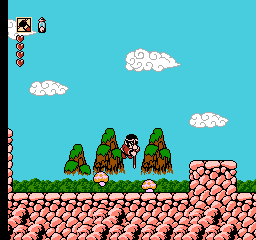 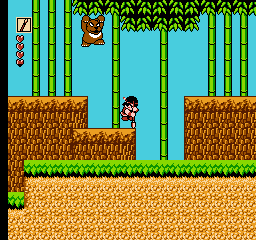 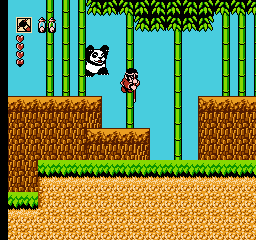 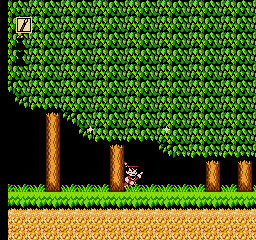 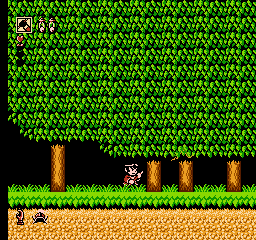