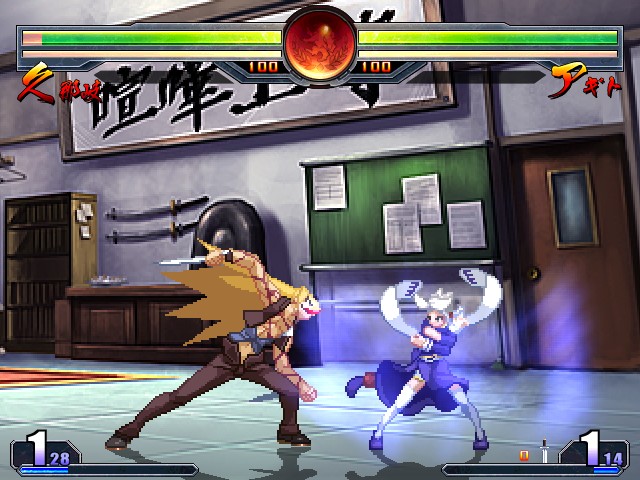 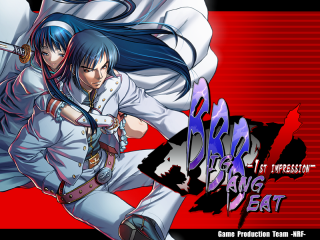 As of 2007, the 2D fighting game was in pretty poor shape. Capcom, the guys who popularized the whole bit, had only made one game in the past five years, the thoroughly mediocre Capcom Fighting Evolution. SNK was putting out some of the best games it had in years with King of Fighters XI and Neo Geo Battle Coliseum, but was still stuck largely reusing the same blotchy sprites it’d been using since the mid 90s. Despite several revisions, Guilty Gear hadn’t seen a truly new iteration since 2000. The few newcomers came and were quickly forgotten – Arc System’s Hokuto no Ken was only barely popular enough to get a PS2 port, their Battle Fantasia all but flopped completely, and very few cared about either of The Rumble Fish games.

Although there were a number of other doujin fighters that found some measure of success, Melty Blood had been the only one to graduate to a state of greater success. In 2007, the doujin fighting scene welcomed two more fighters, both with outstanding, nearly professional production values: Akatsuki Blitzkampf, a World War II styled fighters, and Big Bang Beat: 1st Impression, again based off a hentai game called Daibanchou: Big Bang Age. Like Melty Blood, neither really brought anything new to the fighting game table, but by assembling various elements of other games into tight, well-polished packages, both became successes in their own right. 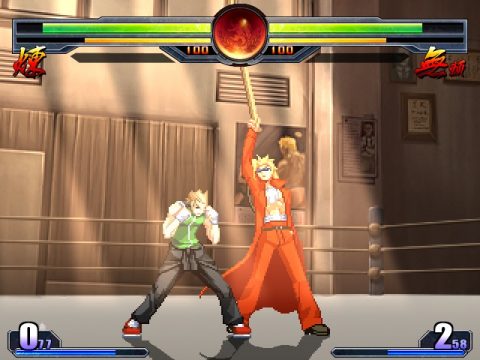 Big Bang Beat was developed by NRF Software, the same guys behind the rather popular Guardian Heroines series. It was also funded by Alicesoft themselves, which accounts for its astounding production values, since it’s been around the PC world as a porn game publisher for quite some time and obviously has more cash lying around than your standard doujin team. Its action is a bit closer to style to Melty Blood, in that its gameplay is styled closely after the manic, fast paced action of Guilty Gear X. All characters can double jump or dash in mid-air, and combos are generally easy to perform and flow together quickly. But it brings a number of elements to the table that elevate it beyond even Melty Blood‘s ambitions, for a much more fully fleshed out fighting experience.

The online store Himeya describes Big Bang Age as an “Insult Sim” – reading about it suggests that it’s some kind of strategy game. According to the AliceSoft Wiki, there are also tons upon tons upon tons of characters. Out of all of these, there are only ten fighters in Big Bang Beat‘s roster, not including two super powered variations and two secret joke characters (a doll named Hanny and a fish named Mambo – to select any of these, just hold down the Boost button at the selection screen to activate random selection, then press up, down, left or right.) Now, Melty Blood‘s roster was a bit odd, because it was full of characters that were never meant for a fighting game. Big Bang Age at least seems to have some kind of fighting aspect to it, so its characters feel a more bit suitable than, say, the robot maids or gothic lolis from Melty Blood. Considering that it was based off of a hentai game, the designers of Big Bang Beat showed surprising restraint in choosing female characters – there are only three, versus the seven other main characters. In fact, you could hardly tell it was based off a porn game to begin with.

A sword wielding lass whose color scheme is like a Japanese miko, even though her outfit is more like a schoolgirl with a cape.

A crazy boxer dude. His “strong” attack allows you to sway back and forth. Pretty damn strong, in the right hands.

Basically a demonic version of Bruce Lee, Daigo has some crazy kung fu moves, complete with the requisite “WACHAAAA!” screams. The blue track suit is pretty dorky though. The final boss is a variation of him called Devil Daigo, who has a pair of demon wings, and is pretty obviously based off of Go Nagai’s Devilman.

A crazy dude with a thing for sentai shows. He has some wacky postures and exaggerated running motions, which appear to be useless. There’s also a “Super” mode that appears as a hidden character. Kinda reminds me of Rai from Waku Waku 7.

This fox girl is like a variation of Chipp Zanuff – extremely fast, with some teleportation movies and quick bladed attacks.

A punk-ish dude with spiky hair, a long red jacket, and a huge sword. Your basic typical Japanese badass.

A pair of twin sisters. You control Kendo, who wields a sword. Kyudo stands in the background and uses a bow and arrow – you can give her orders to move or attack with the strong attack button. 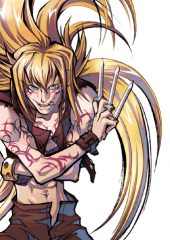 Agito of the Dark

Big Bang Beat‘s version of Zangief or Potemkin or whatever variation of your favorite huge grappler. His hands are larger than most character’s heads by several orders of magnitude. 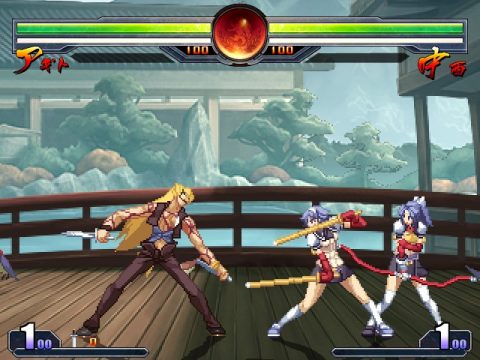 The character roster isn’t particularly inspired, consisting of your usual fighting game types. But the artwork is very, very good, and none of them delve into the overwhelming weirdness that afflicts some of the Guilty Gear crew. But a special commendation needs to be made about the game’s sprite work. Like Melty Blood, they’re all low-res sprites against high-res backgrounds, so the pixels are pretty huge and chunky. But damn, they’re animated well. Although not quite at Garou: Mark of the Wolves level, their idle animations shows the same kind of care that you find in top tier SNK games. SNK was always fantastic at drawing the player closer to their onscreen personas through their most subtle movements, so you feel awesome just watching the simplest action in motion. It’s a whole lot better than Akatsuki Blitzkampf anyway, even though that game has the advantage of high-res sprites.

The rest of the graphic quality is mixed. The pre-fight intros are practically straight out of Guilty Gear, complete with brief guitar wailings, and are just as awesome. Like many doujin games, the backgrounds tend to be a bit on the dull and empty side, though there are a few with some life to them, particularly the Hawaii stage. The music is all supplied by doujin rock group MintJam, most of which consists of some excellent fast paced rock. The final battle features some hilarious Engrish singing, which makes it completely worthwhile to play through the single player mode.

Visually, Big Bang Beat holds up extremely well, but of course its strength lies in its fighting systems. There are three main attacks – weak, medium, and strong – with the fourth button acting as the “Boost” button. The crux of the game’s special techniques relies upon this Boost button and its corresponding power bar, the equivalent of a super meter. Under most circumstances, hitting the Boost button will send your fighter flying across the screen in a super air dash. Unlike Hokuto no Ken or Arcana Heart, which has a similar dashing maneuver, this is not a “homing” dash – your character flies at sort of an arc, and it can take a little while to get used to the speed and trajectory. However, much like both of these games, its primary use is to cancel out any of your attacks, effectively allowing you to string together larger combos. Big Bang Beat practically caters to those who love creating huge, flashy combos, because it looks pretty damn cool here. 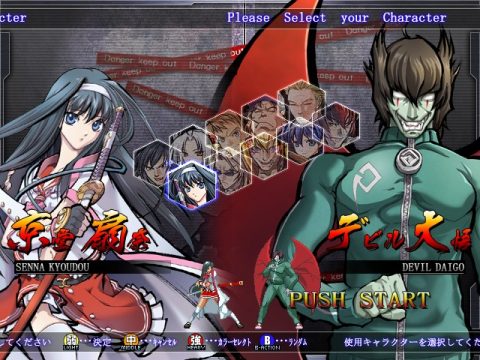 The Boost action has other functionalities too. It’s used to execute super moves in conjunction with various command motions, most of which are pretty easy to pull (hit down twice then Boost, or do a quarter circle with Boost), and usually take a single Boost bar. It can also be used to counter attacks if you hit the Boost button when you’re blocking, which also takes a single Boost bar. and can be used to escape from enemies combos, although this particular manuever takes up a whopping four Boost bars.

Taking a note from Art of Fighting, even your standard special moves are limited by a spirit meter, which is beneath your life bar. It regains slowly, but you can fill up your gauge quickly by holding down the Charge button, allowing you to power up Dragon Ball Z-style. Furthermore, borrowing from the Psychic Force games, your spirit meter will fill up any depleted portion of your life bar. For example, if you’re at 50% health, then your spirit meter can fill up to 150%. You can instantly fill up your spirit meter but hitting down twice and the charge button, which expends one Boost stock. Strangely enough, even simple moves like air dashes will also drain from the Boost bar, although only in small amounts. There’s also an “enhance” button, which is basically a taunt that increases certain capabilities , each of which is character specific.

In order to refill your Boost meter, you need to pick up the crystals that pop out of a character when they take damage. The more damaging the combo, the more crystals that fly out. Sometimes it’s hard to be mindful to pick them up, especially since they disappear after only a few seconds. Plus, the character who’s one the receiving end of the combo tends to be knocked into the crystals, giving them a slight advantage even after being lambasted.

While Big Bang Beat does tend to err on the side of button mashing – huge combos are easy to pull off, assuming you’ve actually stored the Boost to pull them off – it’s rare that it seems too cheap or abusive. The only real potential problem is that there’s no block damage, nor is there any way to break an opponent out of their block, which can lead to a lot of turtling. Also, if you stick to single player, the CPU AI is brutal on anything but the lowest setting, in which case it’s a total pushover. 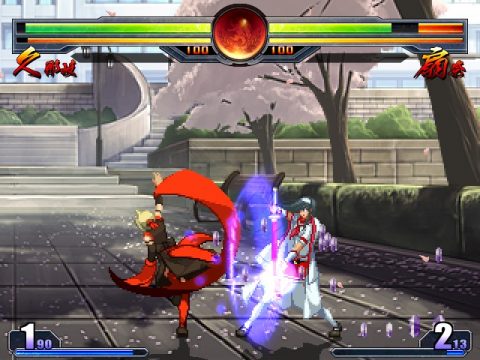 The subtitle of this is “1st Impression”, implying that they’ll be some more revisions. Here’s hoping that’s true – again, there are ton of characters that NRF could take from Big Bang Age to expand the character roster. But even if it doesn’t happen, Big Bang Beat is arguably one of the finest original 2D fighters released in its time – it certainly warrants a console port, if only to expose it to more people and promote it from mere doujin game status.