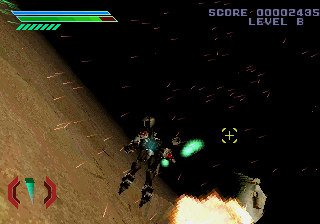 This game is part of a feature on 3D rail shooters in HG101 Digest Vol. 4: Star Fox and F-Zero. Please check it out!

Omega Boost was released in 1999 for the Sony PlayStation, the first effort of developer Polyphony Digital after their previous title, Gran Turismo. The monumental success of that title led Sony to grant the studio more autonomy and rebrand them from their original moniker, Polys Entertainment. While a 3D shooter might’ve been outside of Polyphony’s wheelhouse, which previously had worked exclusively within the racing genre, lead designer Yuji Yasuhara brought experience from his time with Team Andromeda working on the Panzer Dragoon series. That influence is obvious in a number of this game’s design features. 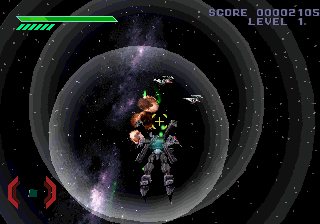 Omega Boost opens amidst a war-torn future where mankind is fighting a desperate, losing battle. Their implacable foes are a rogue AI called AlphaCore and its host of machine servitors. AlphaCore, which in the fiction of Omega Boost apparently predates humanity, had long worked in secret to aid mankind’s technological progress in an attempt to further integrate it into something enigmatically referred to as The Network. However, when humanity discovered AlphaCore’s existence and grasped its destructive potential (the AI and its robotic armies are easily capable of leveling human cities), they attempted to destroy it, which inevitably backfired and led to a lengthy, deadly conflict.

In desperation, human scientists discover time travel technology and plan to use it to travel back in the timestream and destroy AlphaCore before it begins its genocidal offensive. Before they can launch their plan into motion, however, AlphaCore discovers their scheme and appropriates the technology for itself, utilizing it to construct a massive timeshaft on a distant planet and escape down it into the past. Its plan is to integrate itself into the core of ENIAC, the early human computer prototype, thus creating a causal loop and permanently linking it to humanity’s technological advancements. Humanity responds by creating a giant pilotable robot also capable of time travel, who they send back through time to thwart AlphaCore’s plan with decorated pilot Lester J. Hemming at the controls. 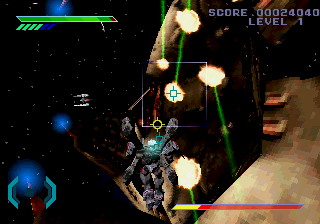 As you might expect from a video game about time travel, AI, and giant robots, the story is a convoluted mess, delivered mostly through a light wrapping of highly produced, poorly acted FMV. It’s very clear from even the opening sequence that the focus of development was much more heavily concentrated on stylish action than delivering a coherent, thoughtful narrative. The story is just a simple justification for what is, at its core, a twitchy, frenetic rail shooter, albeit one with some minor wrinkles.

In terms of presentation, the sound design is fairly standard, with some pretty flat effects for weapon fire and impacts, and an aggressive industrial metal soundtrack that, while it matches the over-the-top gameplay, drowns out some of the dialogue in the FMV sequences (though, given the caliber of the actors, that may be for the best).

The gameplay consists of the player piloting the eponymous Omega Boost through nine levels (and nine bonus stages, which are more difficult versions of the vanilla offerings), blasting through waves of robotic enemies, and then fighting set piece boss battles. The enemies are generally from the military aircraft or giant robot mold, with some of the bosses breaking form to assume marginally more interesting configurations. One of the game’s strengths is rendering interesting robotic forms, including the Omega Boost itself, and it’s here that the team’s collaboration with Shoji Kawamori, best known for his design work on mecha anime like Macross and Gundam, is most obvious. The Omega Boost itself looks straight out of Macross, and a number of the enemies would fit comfortably into any number of anime. 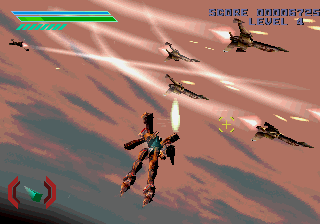 Unlike a number of shooters of its ilk, Omega Boost often lifts most of the restraints on player mobility through its scan mode. Switching into scan from the game’s default linear movement allows players to rotate freely around and through groups of enemies or bosses, and assign lock-on targets at will. Scan mode also immediately targets the closest hostile opponent, which is a good way to maintain orientation during combat and quickly rotate to the next foe after destroying a cluster of enemies. This freedom of movement adds an illusion of depth to the action, and allows for more cinematic fight sequences where the player is boosting dynamically and rapidly around foes and projectiles.

It’s precisely that kind of dynamic movement, and those intense, high octane firefights, where Omega Boost excels. The game is at its best when you’re focused on all the flashing laser fire and brilliant explosions, or rotating around a giant, imposing boss and blasting off various pieces of its armor, or destroying its horde of robotic minions. In terms of stylish action and competent shooting, Omega Boost is near the top of the list of this era’s various 3D rail shooters. 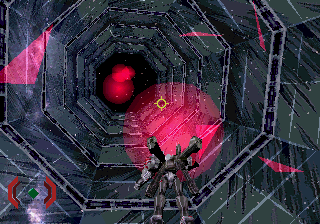 Unfortunately, the game is crippled by two fatal flaws. For one, there’s almost no depth to speak of; the story is paper thin and there’s next to no progression, or even additional mechanical systems to speak of. If you score well in a level you gain an extra level of “boost,” which improves your movement and also allows you to lock-on to additional targets. Eventually, you can even unlock a ramming attack called Viper Boost. Beyond that, however, there’s no progression whatsoever: no additional weapons, forms, or vehicles, no RPG-style leveling or skills, no mech customization. After the first level of locking-on and blasting away, you’ve experienced all of the systems and gameplay Omega Boost has to offer. The only variation on the formula comes by way of enemy and level design. Sadly, the stages are mostly uninspired and rendered as very flat, visually uninteresting backdrops, sometimes containing single textures.

Perhaps even worse, however, is Omega Boost‘s length. The core nine levels can easily be completed in under an hour, and even with the lazy padding of the challenge levels, the whole package offers less than a few hours of entertainment. The game is linear too, with no branches or alternate endings, which would be forgivable if there were more of it. The entire game feels more like a demo than a fully realized product, which is a shame because the core shooting is pretty entertaining, and the potential for this kind of game inside a product like the Panzer Dragoon series is really obvious. 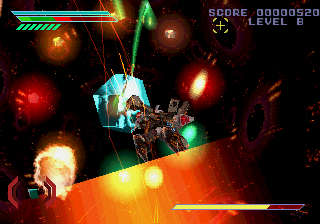 In truth, Omega Boost feels like it was designed for arcades, where it would be easy to justify dropping a few quarters to blast through its explosion-riddled starscapes. However, as a full-price console offering, it’s a lot harder to recommend. In terms of how it stands up almost 20 years after its release, it’s still surprisingly playable. Even so, there’s nothing particularly special about it that would draw players back to it instead of, say, one of the Panzer Dragoon titles, or even something more offbeat like N2O: Nitrous Oxide.