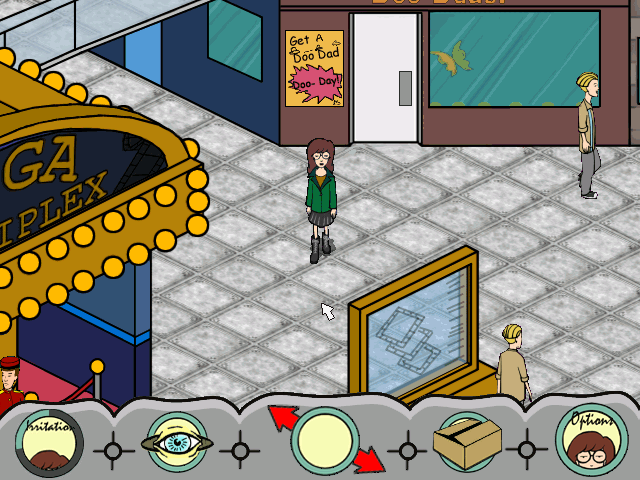 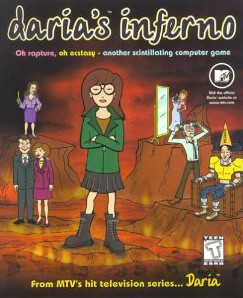 While Beavis and Butthead’s TV show aired its last original episode in 1997, it spawned a spin-off series based on their nerdy classmate Daria Morgendorffer. After moving away from the dimwitted duo (who are rarely even mentioned and never seen), she uses her sarcasm to deal with the pressures of high school life. Although never quite as popular with the younger crowd as Beavis and Butthead, Daria still garnered a cult following, mostly of older fans who could relate to Daria’s world-weary barbs. There was only one game based on the show, entitled Daria’s Inferno, and it takes on the mold of a (rather simplistic) point-and-click adventure game.

In the beginning, Daria is stuck in English class when the principal, Mrs. Li, barges in and proclaims that five random items have been stolen from the school, and sentences everyone to detention until they’re all found. Daria then falls asleep and imagines herself in Dante’s Inferno, requiring her to go through five locations in her town to find the missing items. It’s a shame that they try to reference Dante’s Inferno, but rather than sending you through various circles of hell, you just end up in demonic versions of schools, shopping malls and night clubs.

Rather than the standard side-view screen-by-screen structure, Daria’s Inferno’s locations consist of relatively large rooms viewed from an isometric perspective. Essential items seem randomly strewn about, and their application is usually pretty clear. There’s so little thought that it feels more like a level-based arcade game that happens to use a point-and-click interface. This feeling is further solidified by the numerous enemies throughout each stage, ranging from deranged cheerleaders to pushy salesmen. Since there is no way to attack, all you can do is avoid them. If you get hit, Daria’s irritation meter lowers slightly. When it empties, you’re kicked out of the screen and need to start from the entrance, which isn’t too punishing, but it is unnecessarily… well, irritating.

Like the Beavis and Butthead games, Daria’s Inferno is largely faithful to the source material, featuring a visual style that’s identical to the cartoon, contributions from all of the same voice actors, and appearances by most of the secondary characters, including Daria’s pal Jane as her guide. There are still lots of sarcastic barbs, sometimes uttered seemingly at random. Still, it never quite feels right. In the Beavis and Butthead games, the duo got into all kinds of wacky shenanigans, which is exactly what they did in the cartoon. Daria’s show, outside of some The Simpsons Treehouse of Horror-esque concept shows, is largely grounded in reality. In the first level of Daria’s Inferno, you find the sadistic History teacher, Mr. DeMartino, torturing his students with electric chairs. Once you free them, Kevin, the dimwitted football player, uses his thick skull to charge ahead and break a hole in the wall. Then you climb a gigantic tower filled with elevators, flipping switches until you find the right combination. There’s something that feels incredibly off about all of this – it’s supposed to be written off like one big dream sequence, but it still feels far too video game-y to make sense in Daria’s universe. The only really clever aspect is the hint system, which will guide you to your goal with a short clip from the amusing show-within-a-show, Sick Sad World.

All in all, it’s a daft game, although an interesting curiosity for fans. Still, it’s quite odd that Virtual Stupidity, a game starring two of the most dim-witted characters in animation history, has substantially more depth than the game based on a far more intellectually superior character. It’s the sort of irony Daria would probably appreciate.