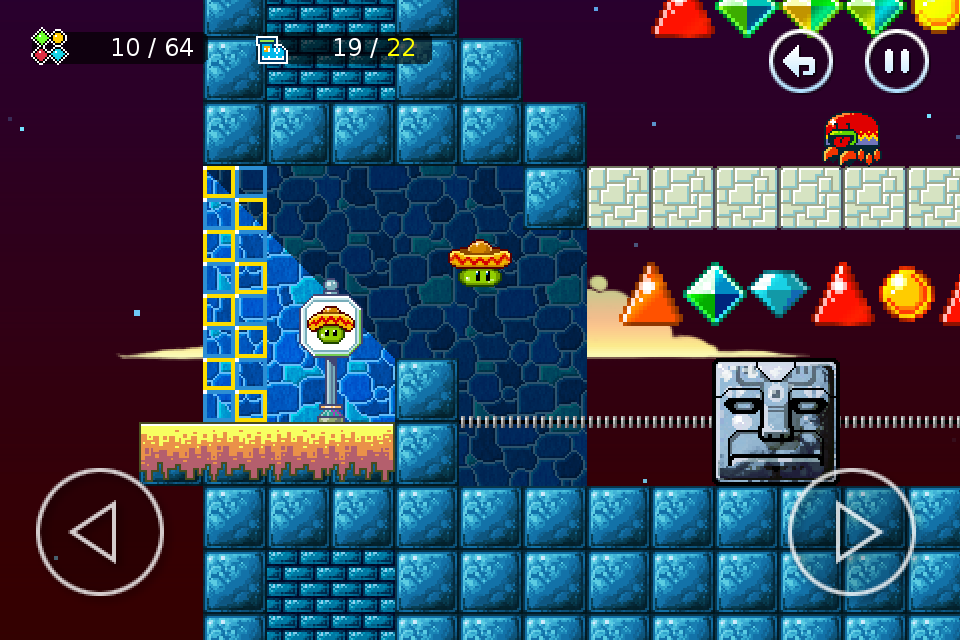 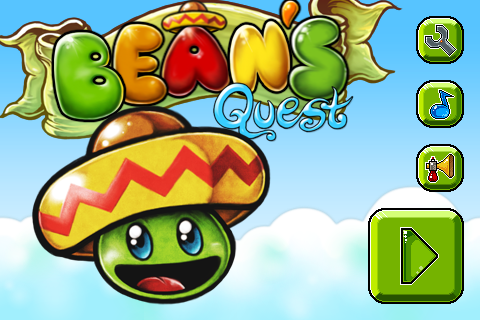 Platformers have typically been terrible fits for touch screen mobile platforms, due to the lack of a proper controller, though that hasn’t stopped people from trying. The best types of games are the ones that pattern themselves after Canabalt, the “infinite running” subgenre, because it automates one of the primary control methods – the movement – and focuses entirely on the jumping. Bean’s Quest, from Australian development team Kumobius, inverts this concept by giving you control over your movement but automating the jumping instead. It takes a little while to get used to, but in the end it’s an incredibly solid platformer. 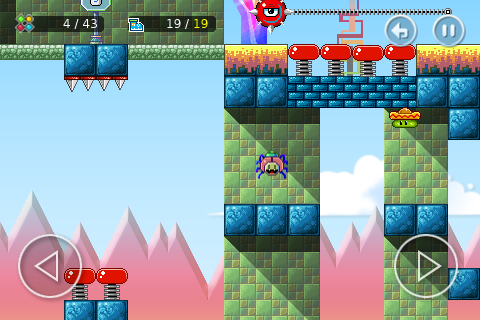 Your character, Emilio, is perpetually bouncing because he’s been turned into a Mexican jumping bean, courtesy of the rather nasty wizard Malmagoz, who’s also kidnapped your lady friend. Through five different worlds (and between eight and twelve levels in each world), you conquer the typical platforming obstacles, leaping between platforms and hopping on enemies heads, to get to the goal. As the game progresses, various gimmicks and challenges present themselves, usually in some way involving physics. There are rotating platforms and gigantic rolling balls, which you must bounce on at the right angle to get them to move correctly. Navigating through water can be tricky, since you naturally float up to the surface, but if you jump in from a higher position, you’ll also dive further into the water. Similarly, there are bouncing platforms which propel you to different heights depending downward momentum – jump on them normally and they won’t have much of an effect, but fall down from a great height and you’ll bounce up much higher.

Getting used to the bouncing rhythm takes a little while, but the opening stages are straightforward and generous. By the third level or so, the difficulty begins ramping up, as you’re forced to deliberately time movements, navigate through tight, spike-lined corridors, and maneuver ever-so-slightly around enemies that are precariously designed to kill you. The final stage can get pretty tough, but the checkpoints are generous, and lives are unlimited. There’s only one boss battle, right at the end, where you must chase Malmagoz through an entire stage of obstacles, using his projectiles as impromptu platformers. It’s such a well designed level that more similar encounters would’ve definitely been welcome. 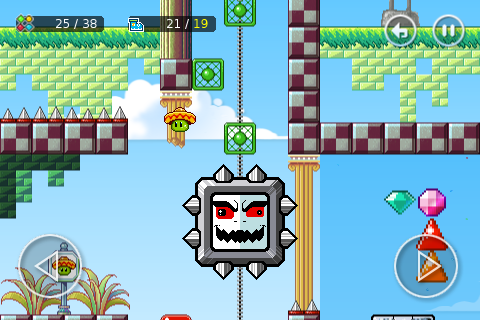 Each stage also has three bonus challenges to accomplish. In every stage there’s a pink little dinosaur called an Axolotolol, usually stuck in any out-of-the way or difficult to reach spot. There are also numerous gems scattered throughout, with your goal being to collect them all. Finally, and this is by far the most difficult, is trying to beat the stage under the “par” number of bounces. The par is always set extraordinarily low, and pretty much requires the sort of skill you’d need to accomplish a NES-style speed run. It also requires using a few tracks, like recognizing that bouncing off enemies or on water doesn’t count against the par. Outside the sense of accomplishment, beating these challenges won’t have much of an effect, but it does add substantial replayability to a game that’s already fairly meaty for a mobile downloadable title.

The visuals, like most of this type, channel retro console games, through the visuals are more close to a SNES than the chunky, low color NES graphics that many other games use. The Mexican and South American themes are bright, attractive and expressive. The music is provided by chiptune artist Flashygoodness, also known for the excellent Tower of Heaven, and mixes 8-bit style music with horns, trumpets, and acoustic guitars, a perfect accompaniment to the graphical style. 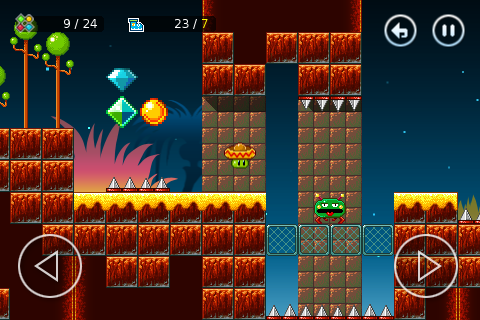 Bean’s Quest is one of those increasingly rare cases where a technical downside leads to creative game design to overcome those issues, making it an essential addition to anyone who loves old school platformers. There are still the usual issues with touch screen controls – it’s all too easy to accidentally push down on a side of the screen and move in an unintended direction – but it also works far better than most. And while it was originally developed for mobile platforms, it’s also been released for the PC, which negates any problem with the touch screen. The computer versions take advantage of the widescreen display, allowing a larger viewing area, though otherwise it’s pretty much identical to the mobile versions.