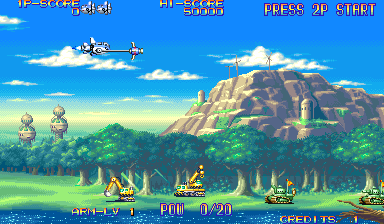 Most of Capcom’s shoot-em-ups can be divided into three categories: their early works (Vulgus, Exed Exes), the 1942 series and its offshoots, and the trio of “flying human” games (Section Z, Side Arms, Forgotten Worlds). Eco Fighters, produced for the CPS-2 board, is one of the handful that falls outside of those ranks, and without having a console port, has mostly been forgotten. 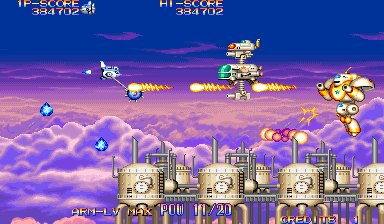 The story images a future where space travel has become possible, with humanity spreading out to colonize other planets. Of course, much of this expansion is undertaken by ruthless corporations, more bent on enriching themselves than caring where they spread. The Goyolk K.K. Corporation is the worst of them, with their machinery polluting whatever planets they touch and wreaking their environments. A few concerned citizens on the planet Elwood decide to strike back. Using spaceships designed by the brilliant Doctor Moly, his niece and nephew, Ice and Neneh, fight through seven levels to take down Kernel Goyolk once and for all.

From a gameplay perspective, Eco Fighters is most similar to Forgotten Worlds. The ships have an extendable arm, which can be rotated around and fired in any direction. It was initially designed to use the same analog spinner knob, though the actual cabinets just use two buttons to rotate the arm left and right, much like the console versions of Forgotten Worlds. This change was probably made since the spinners for Forgotten Worlds had a tendency to break and required higher than normal maintenance costs, so arcade operators probably wanted something more standardized. The programming still supports the homemade spinner knobs if they’re hooked up, however. 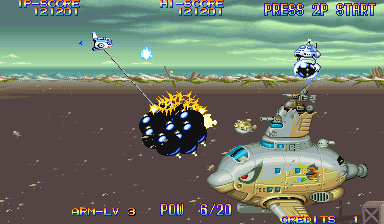 There are four types of weapons associated with the arm: the default energy shot, the hammer, the laser sword, and the foil scatter bomb. Each has five levels of power, which increased by one when you grab twenty power-up icons, or by obtaining the same weapon pick-up again. The hammer is the most fun of these, as it acts sort of like a large yoyo that can be used to pummel bad guys, but the laser sword is fun too, because the rate of fire is so high, you can press one of the rotational buttons and send a constant stream of beams all around the screen.. They’re downgraded whenever you die, but it’s also heavily upgraded when you run out of lives and use a continue. The arm weapons have charge attacks, though unlike other shoot-em-ups, you don’t need to stop firing to juice them up. Instead, they’ll gain strength even when you’re firing, and are unleashed whenever you lay off the trigger button. This allows for a constant if fluctuating pace of fire, making you feel more powerful than most other shooters with similar mechanics.  There are also three subweapons shot out by the main ship: a rapid fire Vulcan cannon, a bomb, and a homing shot. These are less common than the arm upgrades, and can’t be upgraded in strength.

The environmental theme is represented in the stages, which start off with you flying over gorgeous, natural environments, before they become polluted by whatever abomination Goyolk K.K. has constructed in the area. Forests become barren, skies turn grey with acid rain, and blue oceans become dim with sludge. As you leave the planet and begin invading the company’s battleships, you even fight in gigantic piles of trash. Some of the enemies are based off of various type of wildlife too, particularly mechanical fish, though that’s not exactly an innovative concept, given that Darius was nearly a decade old when Eco Fighters was released. The concept might recall cheesy cartoons like Captain Planet and the Planeteers, but it’s well executed here. And besides, presenting the bad guys as nefarious capitalists is an interesting change of pace from the usual evil galactic empires. 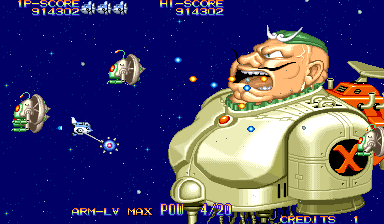 At the beginning of each mission, Dr. Moly gives a briefing of the level and how it’s being affected. These scenes are fully voiced (though left in Japanese even in the English version), impressive for a mid-90s arcade game. Kernel Goyolk, has all of the hallmarks of an egocentric businessman, right down to branding each of its machinations with his company’s name, and one of the boss is a humongous robot using an inflated model of its head. In comparison, the actual pilots receive little attention, though the continue screen is fairly amusing, which is presented as a four frame comic where the player is shot from the sky and begins to crash land, only to see a gorgeous woman. If you don’t continue, then it’s just revealed to be a billboard for a beach, but if you do, then the ship pulls back into the sky and remarks “I can’t give up yet!” 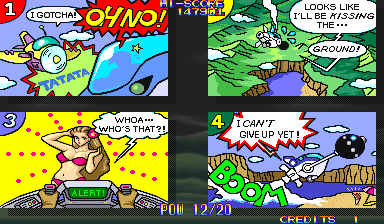 The only real flaw of Eco Fighters is that it was clearly designed for use with a spinner, so it doesn’t quite work without one. The arm can technically block some enemy projectiles too, so bullets will come from every angle, but it’s awkward to use the rotational buttons to get it in the right position. It’s also hard to determine the arm’s hitbox since it’s usually overshadowed by your weapon’s charge, and it’s tough to use effectively. Also, the laser sword weapon ends up being underpowered due to this – you’re supposed to be to extend its length by quickly spinning it back and forth (this can be seen in the demo sequences) but there’s no way to accomplish this using the buttons in the actual release version. As such, these issues mostly stem from the circumstances under which the game was compromised for use in a regular arcade cabinet. But otherwise, it’s a well put together shooter with an interesting concept, with beautiful graphics (even in the polluted sections) and a fun soundtrack. 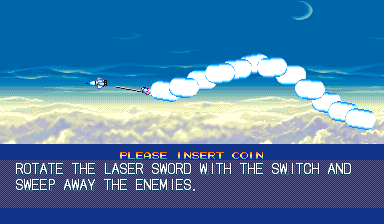 Eco Fighters (or rather, Ultimate Ecology, as it’s known in its home territory) originally had a somewhat mysterious reputation in Japan. It was originally revealed in 1990 in Gamest Magazine, but news of its development went dark as the press instead focused on fighting games like Street Fighter II. It didn’t come out until 1994, and even then it was only released through Capcom’s rental program, so it didn’t appear in regular arcades and was scarcely seen in any other places. It did receive a soundtrack release, but the game itself was so difficult to find, and without much coverage or the internet around to set things straight, many assumed the game had simply been canceled. It didn’t receive wide release until 2002, nearly a decade after it was supposed to come out. Meanwhile, the game received regular distribution overseas, though given the lack of popularity of shoot-em-ups in 1994, it wasn’t exactly a hit either.

An emulated version of the game was released  on the Capcom Classics Collection Vol. 2 for the PlayStation 2 and Xbox, and on Capcom Classics Collection Reloaded for the PSP. These versions let you map the rotational function to the left and right shoulder triggers, so it’s a little easier to play. Additionally, the PSP version lets you aim the arm in any direction using the face buttons, giving Eco Fighters controls slightly closer to what was originally intended, since you can more quickly shoot in any direction.

http://www.higenekodo.jp/untiku/eco.htm – Pics of the board and some history (in Japanese)