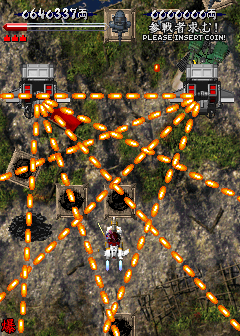 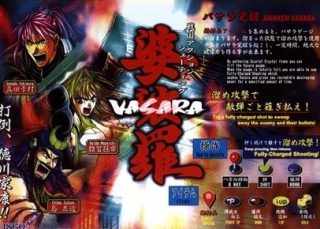 The Vasara games are two fairly unique manic shooters. They’re set in medieval Japan, but feature giant flying robots, much like Compile’s M.U.S.H.A. and Robo Aleste. It’s actually quite a bit like a shooter version of Capcom’s Sengoku Basara series (“Vasara” is simply an alternate spelling of “basara”, as the kanji is the same), in that it uses stylized, reimagined versions of famous historical characters. Vasara, of course, predated Capcom’s series by five years. The two Vasara games were developed by Visco, a company with a reputation unnotable games like Galmedes, Breakers, Andro Dunos and numerous other largely forgotten titles. In their last years, after a whole decade of mediocrity, they somehow put out these two outstanding games.

One of the notable gameplay aspects of the Vasara series is that each playable character has a chargeable melee attack that can cut through enemy bullets. This ability is invaluable because, this being a bullet hell shooter and all, there can be up to (and usually over) a hundred bullets on screen at once with absolutely no slowdown. The bullet speed can depend on the attack, too. This means that some attacks are huge, slow moving, clusters of bullets that are easily avoided, but take longer to leave the screen and some attacks are small, fast, bullets that come out of nowhere. 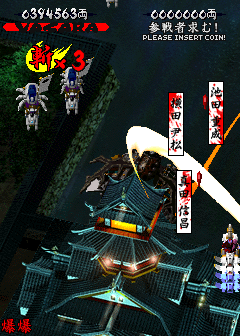 Additionally, the characters (enemies and playable) do not die upon collision. You can crash into enemies all you want, and all they will do is knock you back. Don’t let that fool you into thinking it’ll be easy though, though because some bosses actively try to push you into their bullet streams. Part of the reason for this has to do with how you usually need to get in fairly close to get your charge shot to hit. This is an ingenious idea that really makes Vasara feel different from most manic shooters.

Vasara takes place during the Sengoku period during Tokugawa’s rise to power. Despite taking place in the 1600s, Vasara is filled to the brim with giant sword wielding robots, skull tanks, flying battleships decorated with demon heads, and many other enemy types usually reserved for sci-fi shooters. There are three playable characters, each specializing in a different weapon and riding on a different hover bike. All three of them plan on crushing Ieyasu Tokugawa and his forces for their own reasons.

Yukimura Sanada, according to Visco’s web site, uses trickery to fight in order to obtain peace. He is from the Toyotomi house, which was crushed by Ieyasu Tokugawa. Yukimura Sanada, like most of the characters was a real person that was recorded to have fought battles back in the Sengoku period. The game has an interesting take on history, to say the least. Yukimura wields a powerful sword as his charge shot that is surprisingly easy to use. His hover bike is also equipped with little homing kunai that do bits of extra damage.

Age 55. Keiji Maeda was also a real samurai from history. After his House Sagaki was killed off, Keiji Maeda promised himself to bring Ieyasu Tokugawa to justice. His hover bike moves the slowest, but has the smallest hit box. For his charge shot, Keiji pulls out his spear and repeatedly stabs into an area directly in front of him. This can sometimes hit bosses multiple times and if used right. It is the most powerful and crushing charge shot in the game. His hover bike is also equipped with javelins. The javelins fire directly in front on him, move very slowly, and does a lot of damage. The best part about this is that the javelins do not disappear or break upon impact and can strike right through multiple enemies before leaving the screen.

Age 15. Unlike the other two characters, Saiga Magoichi is not based on a historical figure and was completely made up just for this game. She is supposedly the daughter of Saika Magoichi, a real historical figure, but fictional characters may be the least of Vasara‘s historical inaccuracies when one of the bosses is a giant robot samurai that can transform into a larger robot samurai. It is best not to take Vasara‘s story too seriously. Saiga Magoichi’s charge shot surrounds her in a circle of fire. This is very useful, as bullets come from all sides, sometimes at very fast speeds. Her hover bike also has fans that act as homing shots. The paper fans actually do more damage than Yukimura’s kunai, which once again, is best not to worry about too much. 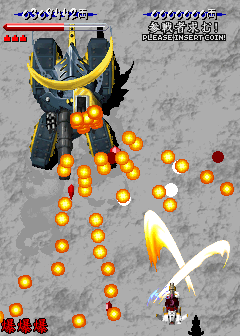 Besides the previously mentioned charge shots and sub-shots, each character also wields a screen clearing bomb that erases all bullets and heavily damages any enemies on screen, as well as a super attack called a Vasara that’s a more powerful version of their charged attack. Vasaras are essentially more powerful bombs and can be used more often due to how they’re replenished. Each time an enemy is damaged with a charged attack, it drops red gems. Picking up red gems makes your Vasara meter go up. Once your Vasara meter is full, the next time you do a charged shot, you will instead unleash a destructive Vasara, usually with the playable character shouting “Vasara!” to accompany this.

With the bombs, Vasaras, bullet clearing attacks, small hit boxes, and a generous extend rate, this soundssounds like it should be an easy game. Even with all of these powerful weapons at your disposal, it really isn’t. Visco obviously got a lot of its inspiration from Treasure games, as bosses are huge and take multiple forms. Smaller, mini bosses litter every level and to make things more troublesome, they come in groups and you usually have to fight two at once. Continues do not allow you to switch characters and start taking you back to checkpoints on the last level, disallowing you to credit feed. Lastly, if you want to earn a true ending in Vasara, you have to beat the game on one credit anyway and defeat Ieyasu Tokugawa, who is disappointingly just a powered up version of the fake final boss.

Each playable character starts off on a different level, with Keiji Maeda starting outside a snowy fortress, Saiga Magoichi starting in a harbor, and Yukimura Sanada starting in a grassy field. Once these three levels are done, you go through a strange pink cloud over a fortress at night, a hidden palace in the wilderness, and lastly, a barren battlefield covered in dead bodies. Most of the levels look amazing and are very detailed, including subtle things like swinging leaves in a breeze to little spider tanks bursting out of a palace to defend their territory. 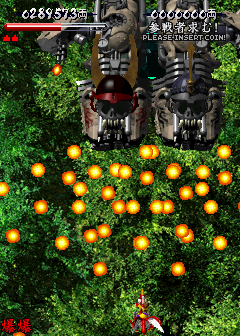 Vasara‘s scoring mechanics are dubbed the “Prestige Kill System”. When you kill enemies with your melee attack, they will drop a blood-soaked flag with their name on it. You shouldn’t actually pick this up, because that flag stays on screen for a few seconds, giving you time to destroy another large enemy. The bloodied flags multiply your combo and you get a multiplier on how many points you earned based on how many flags showed up. Bombs do not count. Vasaras, however, do count as melee attacks, making them the easiest way to get huge points and awesome things such as x11 multipliers. Additionally, all of your bloodied flags are tallied up at the end and you are given a set amount of points for each one. Another way to get points is grazing, which is where a bullet passes through your sprite, but not your hit box, a feature borrowed from various Raizing games. This would be risky, except that Visco was nice enough to show you each character hit box on the player select screen, making grazing surprisingly easy in this game.

The weakest point of Vasara is its final stage. Unlike the vibrant forests, busy fortresses, or bizarre pink clouds of the levels before it, the last level is a grim relatively dull and empty battlefield. The amazing set pieces such as giant robot samurai and overconfident generals are gone, leaving only popcorn enemies and some very easily memorized bullet patterns. The level picks back up for the big fight against the end boss, but the fake final boss is a pushover if you know what you’re doing. Fortunately, the other five levels are all fantastic and offer some very good manic shooting. 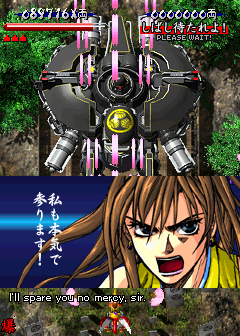 One interesting note is that all of the cutscenes and dialogue are in spoken Japanese with English subtitles. Even though Vasara never left Japan, Visco may have had plans to try selling them in other countries. Sammy bought Visco soon after the second Vasara game was released, and Sammy seems to have no interest in either of the games.