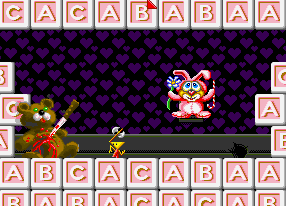 Jennifer Diane Reitz is, to say the least, a very unusual and polarizing person. She was, in the mid-’90s, one of the owners of the now-defunct HappyPuppy.com, at the time the biggest site about video games on the Internet, one that generated great amounts of revenue. In the same period she worked as a game/level designer for Activision, and later as graphic artist and assistant for various companies like Epyx, Electronic Arts, Brøderbund and Interplay. Later on came the deal with Apogee, which should have ended with the creation of a side-scrolling game with procedurally-generated levels; it was never made, for various reasons. The only fully completed commercial product made by Reitz and her associates is Boppin’. It can be described as a more complex Puzzle Bobble, or maybe as “Arkanoid meets Puzznic“, but more on that later. 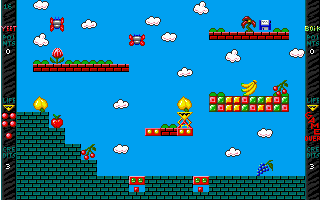 Boppin’ was originally an Amiga game published under the moniker KarmaSoft, but according to the developers’ notes it sold abysmally (less than 300 copies), so later on a shareware DOS version was published by Apogee. It featured more on-screen colors, better graphics and more levels. This version, which consisted of 150 levels divided in four episodes, was also the basis for the 2005 Windows version that restores the original Amiga music and sound effects, and can still be found and downloaded as freeware on one of Reitz’s sites.

The backstory is unusually complicated for a puzzle game: player characters Yeet and Boik (two stick figures with heads shaped like yellow upside-down cones and cool sunglasses) are going to the rescue of video game baddies trapped into blocks courtesy of Sweety Hunnibunz, a nauseatingly cute goodie-goodie creature who wants to erase all “naughty things” from the universe of the game. They do this to restore the natural order of things, and also because the other video game heroes will become unemployed without enemies to face. The full introduction has all the typical tropes Reitz is interested in (or obsessed with), which can be found in all of her body of work including webcomics:

Boik and Yeet pick up blocks from the spot in the ground they appear from, put them on their flat-topped heads and throw them at a 45 degree angle against one or more identical blocks to make them disappear, a process described as “Boppulation”. So far, so good, but the layout of the levels is fairly elaborate and the player needs to pay attention to the rebound against walls (much like the balls in Arkanoid or Puzzle Bobble but always with the same angle), plus at times it’s needed to push stray blocks near others to complete block patterns. This is further complicated by the fact that Boik and Yeet need to use elevators because they can’t jump and can only move on a horizontal line (but they can wrap around the levels). There are also special tiles on walls and ceilings that cause blocks to travel on a straight line instead of the usual 45 degree angle. There are other gimmicks such as blocks falling up or sideways in certain levels, invisible blocks and the apparently random “mystery spot” that activates if a block passes through it: everything will be colored gold (or maybe piss yellow) and the score will be multiplied by 10 for a short time. 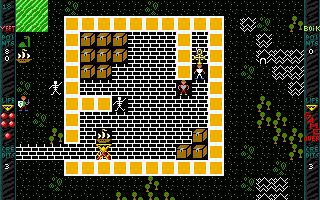 The goal of the levels is to clear them of all the blocks and pick up bonuses, but there’s also the matter of freeing the bad guys: if the player completes a block pattern (usually a 2×2 or 3×3 grid, but there are a couple more), the screen will flash white and, with a metallic-sounding “MWUHUHAHA”, an evil character will be freed. This is not mandatory but largely recommended because it gives players a nice points bonus at the end of the level. Plus, you know, it’s in the plot. 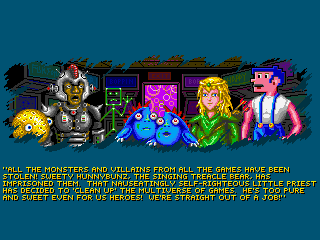 At the end of every episode there is the battle against the boss, which is fought by throwing blocks in the form of weapons at him/her in a Arkanoid sort of way. This is probably the worst part in the game – the boss just bounces around and sometimes will stomp the player, who is just throwing blocks at random hoping that they collide. It’s tedious and boring, and for some reason the developers decided that the scoring influences the damage done, so if you freed only a few baddies or cheated your way to the end level, you may need dozens upon dozens of hits to bring the boss down for good. To add insult to injury, every boss level is the same and only the boss him/herself (Hunnybunz, his wife and their son) changes. At least these creatures will become more bruised and battered the more you hit them. 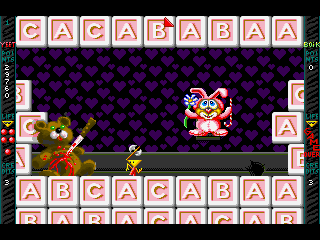 The gameplay is very much trial-and-error, not only because it’s not always easy to determine the trajectory of the blocks (and in some cases what are blocks and what is part of the scenery), but also because there’s many ways to lose. If the player matches incorrectly two blocks, or the block flies off the level boundaries, or it hits a bad spot on the walls (which are identical to normal tiles and totally undetectable, by the way), they will lose a life. After all lives are lost, Boik and Yeet will commit suicide.

Yes, you read that right – probably ashamed by the idiocy of the player, the two guys will off themselves, one by committing seppuku (that is, gutting himself with a sword) and the other by putting a gun in his mouth and pulling the trigger, both lovingly rendered in pixel art. It should be noted that Yeet and Boik can be killed off just by pushing a key if the player gets stuck in a level, but this is unnecessary since every level can be replayed indefinitely just by pressing R. Also, the only penalty to fail a level is to restart it with the same amount of points and lives one had when first entering it. So, including the fact that it is always possible to save the game, suicide is not such a common occurrence. 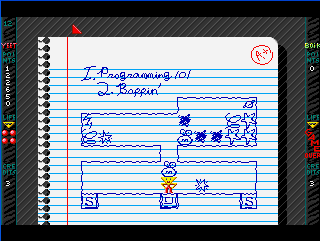 There’s no real reason to add such gruesome details, other than staying true to the title screen that promises “Determined to Disturb” and “Adult Games for Adult Minds”. This, however, clashes with the general tone of the game, that is say, a puzzle game for everyone. Jennifer Reitz claims that this kind of stuff was inspired by the gags of old cartoons such as Looney Tunes, when “political correctness” didn’t exist, but it still comes off as unnecessary and gimmicky. The early DOS version of the game had the publisher ask her to actually censor these details and other things; for example, the stabbed and bleeding teddy bear in the intro was replaced with a cutesy one holding a plunger (?) in its paw. This can explain Reitz’ bitterness against censorship and moral guardians, though not by much. These elements were reintroduced in later versions with the option to toggle them on and off, and became permanent in the Windows one. Also, in the uncensored version, Hunnibunz has a cross on him that turns into a swastika the more hits he takes. How’s that for subtlety? 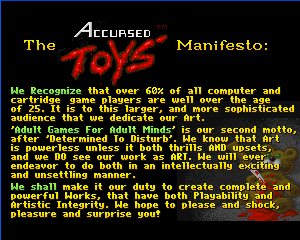 Another thing of note is the high level of creativity put into designing the graphics. Several levels are generic abstract/surreal puzzle game levels, with the blocks shaped as cubes, stones, gems and so on, but there are also nice-looking levels that look like handwriting on paper sheets, blueprints, black-and-white rooms, vector graphics, sushi platters, go tables, and many of them replicate the layouts or tiles of many famous games. The designs of tiles, baddies and bonuses are full of references, including but not limited to Q*Bert, Arkanoid, Pac-Man, Galaga, Marble Madness, Dig Dug, and even Ultima. Many bonus icons are the usual fruits, gems or stereotyped magical objects but also include bonuses taken from other games, game consoles, computer logos and lawyer-friendly appearances of Hello Kitty characters and such. Liberated baddies are everything from toy robots, weird monsters, ghosts and grim reapers to barrels of toxic sludge, (not)Daleks, abstract shapes and faceless men in black suits that predate Slenderman by about 15 years. Too bad that it can be hard to tell whether certain elements are blocks, bonuses, elevators or part of the landscape, even harder when some elements are actually reused both as bonuses and blocks (sometimes in the same level!) with no real reason to it. 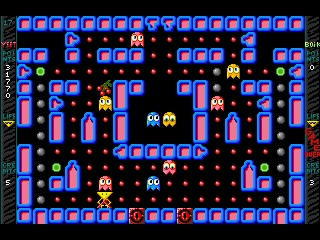 The complete version comes with a level editor and a fifth episode, called “Aleph-Zero Hunnybunz!”, which is a way to play the levels you created. The editor is a good way to enjoy all the dozens of graphic tiles and to put together even wackier and more bizarre stage layouts.

Boppin’ is an interesting and colorful puzzle game with a goofy but curious premise, actually clever and brain-teasing levels (especially if you want to free all the bad guys) and a nice if weird soundtrack. The downsides are the unpolished gameplay, confusing graphics and lack of replay value (and Reitz’ tendency to force her beliefs down your throat). Still, there isn’t anything quite like it and it is a nice job for this type of shareware game.

The Official Home Of The Infamous Accursed Toys Game Download, instructions and an amusing “interview” with Boik and Yeet.
RGB Classic Games 2008 interview with Reitz about Boppin’ and her job as a video game artist. 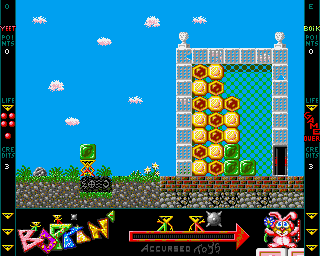 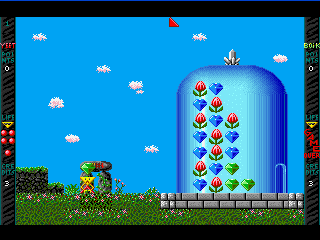 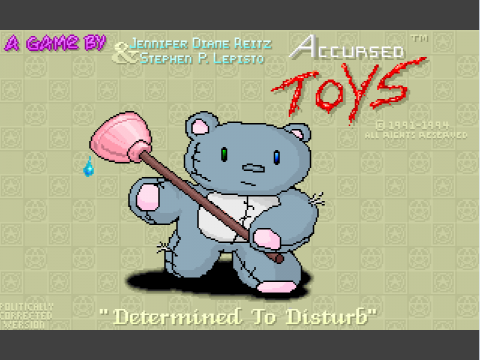 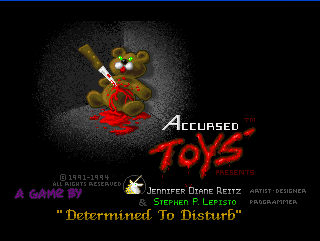