In the mid-80s, a variety of developers began combining the action-based gameplay of console and arcade platformers with the statistics and equipment driven features of a computer role playing game. Amongst one of the first of these experimentations for the Famicom was Sunsoft’s The Wing of Madoola, released in 1986 for the Famicom. 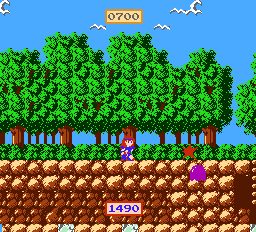 The heroine is a big-haired anime-styled female warrior named Lucia, who tends to get overlooked when discussing female protagonists in video games, probably because The Wing of Madoola isn’t all that fantastic of a game. Although clad in a warrior swimsuit outfit, at least she’s not as embarrassingly portrayed as Namco’s Wonder Momo, another early video game leading lady, although one highlighted for all of the wrong reasons. The fantasy stylings of the heroine is very similar to the anime OVA Leda: The Fantastic Adventure of Yoko, which also heavily influenced the Valis series.

Leda: The Fantastic Adventure of Yoko

Lucia’s journey requires traversing through sixteen stages to defeat the evil Darutos and save her beloved prince. There’s no story in the game itself, and what little text is entirely in English. Structurally, the closest comparison to The Wing of Madoola would probably be Sega/Westone’s Wonder Boy in Monster Land and Namco’s The Legend of Valkyrie, although Sunsoft’s game predated either of those titles. In all three cases, the focus is just as much as action as it is picking up loot. 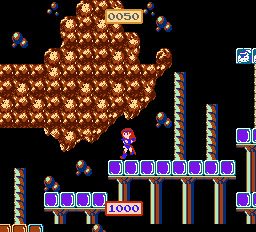 The first couple stages are mostly linear, but the game quickly introduces non-linear labyrinths that, while technically self-contained and not all that large, can still be slightly confusing to navigate, especially owing to the occasional warp door. The ultimate goal is to hunt down the boss, take its power crystal, and make your way to the exit. Just as important is exploring all of the other alcoves in each stage, many of which have equipment essential to your quest. Grabbing a pair of boots will increase your speed and jumping prowess, while swords will increase your attack strength. There are also multiple magical items spread throughout the game, including flame swords, bombs, and bouncing balls, although these consume magic when you use them. Jars and spell books will also increase your maximum health and magic power, respectively. The ultimate goal of the final stage is to find the eponymous Wing of Madoola, which will allow you to fly into the sky and take on the penultimate baddie.

Although picking up all of these power-ups is technically optional, it’s something you’re going to want to do, because The Wing of Madoola‘s enemies are unrelenting, and the numbers are rarely balanced in your favor. Right from the beginning of the game, the smallest of frogs take several hits to kill, as do the other standard enemies, until you’re able to stumble through a few screens and improve your sword. Even as you proceed through the game, you can find yourself being attacked from all angles by enemies that can sap huge chunks of your health, to the point where most of the time it’s just better to avoid conflict altogether. There are even certain enemies, malicious purple blobs things that respawn infinitely in certain areas, requiring you to stave them off while you dash away. (The trick is that they can’t attack when you’re crouching but at least you can still harm them in that position – unfortunately due to the rate which they fly towards you, that’s not a huge advantage.) There’s no gold or experience points to obtain, and while fallen enemies occasionally drop health or magic restoratives, they’re so rare as to make it not worth your time. So each stage generally boils down to running around, jumping away from as many enemies as possible, scavenging for items until your health starts to run low, then hunting down the boss and hoping you have the numerical fortitude to survive. 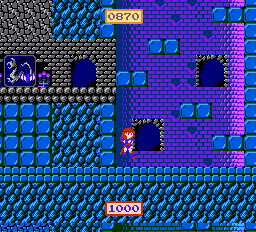 This being a Famicom game from 1986, the action is highly unrefined. Enemies attack quickly and erratically, and the range of your sword is so short that it’s hard to fight anything without taking damage yourself. At least since Lucia swipes at an arc, she can attack enemies directly above her, as well as to the side. This issue is also slightly negated by the various ranged magic spells, even though they are limited in use. The enemy spawning is also glitchy, occasionally wrapping around to other sides of the screen, or flat out disappearing. Most bosses, save the last, are simply more powerful versions of regular enemies, and the only real strategy is to either attack from a distance or play hit-and-run.

The difficulty initially seems overwhelming, because once you die, there’s no evident way to continue. However, holding down Select then pressing Start on the title screen after perishing will bring you to a stage select, allowing you to resume progress where you left off, or start at an already-completed area, in case you’ve missed some power-up items. It also resets your magic to maximum and your health to 1000 – helpful considering that your health and magic are not replenished between stages beyond the 500 points of life granted when grabbing the boss’ crystals. 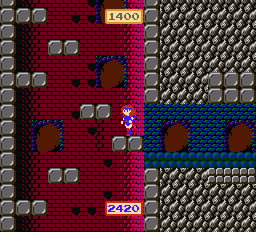 Owning to the technical limitations of a 128k ROM, both the visuals and the map layouts are quite repetitive. Some of the levels differentiate themselves using altered palettes, but more than a few stages are only slight variations on the same outdoor area, giving many areas a distinct feeling of deja vu. Furthermore, the generally clumsy nature of both the combat and the RPG elements render The Wing of Madoola only really playable for those with a historical interest in action-RPGs. You can also see the groundwork that Sunsoft laid for better titles, like their 1988 release Blaster Master, which took both the action and exploratory elements in a more palatable direction.

At the time of the game’s release, there was also a contest to find a secret password in the game’s eighth stage. Upon successfully finding it, the player could send it to Sunsoft in exchange for a music tape with two tracks, one from The Wing of Madoola, the other from the Famicom Disk System adventure game Dead Zone. These two tracks were replicated on a third mini-CD included with the ROM Cassette Disc In SUNSOFT release from 2011, which features music from all of Sunsoft’s cartridge based games, including The Wing of Madoola. The bonus tracks are cheesy but enjoyable 80s-style synth, while the in-game music is fairly average, predating the era of amazing Sunsoft NES soundtracks that began with Blaster Master. The outdoors theme music is peppy and likable, and the castle interior theme is excellent, but the rest is largely unmemorable.

Lucia is well known among Japanese retro game fans, and she even starred in various series of comics, including a spinoff called Wing of Madoola Gaiden, authored by Moriken, the game’s character designer. More recently, Moriken founded the circle M’s Cafe and has published a number of doujin action/adventure games starring heroines from old Sunsoft games – Lucia stars in Ma○oolaEX, while other games parodied include Dead Zone, Ripple Island, and Marchen Veil. Additionally, Lucia, along with Kane Gardner from Meta Fight (AKA Blaster Master), Yumetarou from Gimmick!, and the characters from Hebereke (AKA Uforia), also showed up as super deformed characters in cards for Sunsoft’s Barcode World game. 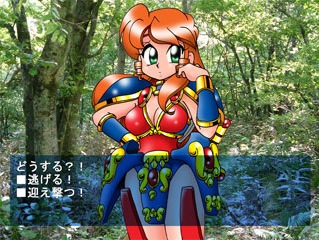 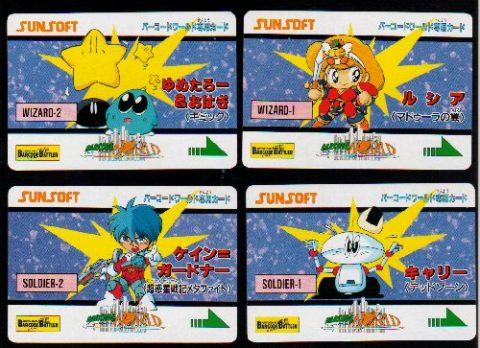 The Wing of Madoola was later re-released on the PlayStation as part of the Memorial Series SunSoft Vol. 3 package, where it was coupled up with Toukaidou Gojuusan-tsugi, another Japanese-only Famicom title. It’s just a straight emulation with sparse extras. The game was also featured on Game Center CX / Retro Game Master and is one of the few officially translated videos posted on Kotaku during the show’s online run in 2011, despite the game not ever having been officially released outside of Japan.

Links:
Strategy Wiki – The Wing of Madoola A full walkthrough.
DLSite.com – M’s Cafe All of the games developed by the artist.