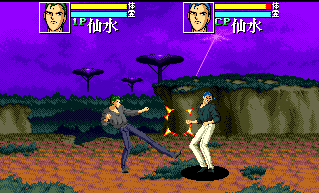 In the early ’90s, Capcom’s Street Fighter II wasn’t just a video game, it was a bona-fide phenomenon. It revitalized the arcade business, and eventually dominated the home market with its brand of one-on-one fighting done right. Hot on their heels, SNK used the power of their 24-bit Neo Geo MVS to create their own family of fighting titles which would go on to become legendary in their own right. Unfortunately, the inevitable result of any gaming phenomenon, even to this day, reared its ugly head, and a rash of inferior clones flooded the marketplace in race for that piece of the proverbial profit pie.

Fresh off of Dynamite Headdy, Treasure was again set to take on a licensed property. This time it was to be Yu Yu Hakusho, an anime and manga popular in the Land of the Rising Sun, but almost completely unknown in the West (at least in 1994). Possibly due to the genre’s overwhelming market presence at the time, not to mention the large cast of characters and storyline provided by the license, it was decided that a fighting game would be created. To step things up a bit, Treasure took the multi-plane battlefield of SNK’s Fatal Fury series, injected some familiar Street Fighter II controller motions, and added support for up to four-players simultaneously. This was not to be some inferior clone. 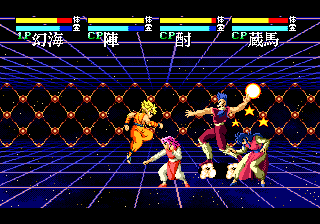 Not surprisingly, considering that Yu Yu Hakusho would have been a tough sell in the US at the time and the Genesis was nearing the end of its life span, Sega of America passed on the game. How typical and unfortunate. The sad truth is that, even with an obscure storyline and character roster, the Yu Yu Hakusho license lent itself well to a one-on-one fighting game, and the sheer mayhem inherent in the innovative four-player brawling led to a title that could have been a true contender for dominance in college dorm rooms everywhere. With a more recognizable cast and setting, this game could have been a Super Smash Brothers before the Nintendo 64 was even conceived of. As it stands, the US missed out on what might have been regarded at best as a true classic, or at worst, as a cult sleeper hit.

Good play mechanics are the absolute cornerstone of any great gaming experience. In this regard, Yu Yu Hakusho: Makyou Touitsusen is an absolutely stunning success. Rather than just cop the 6-button control scheme of the current standard, Treasure approached things from a different angle, creating a system that placed as much emphasis on defense and player movement between and within the two planes as it did on offense. Their approach also allowed for equal facility on both the three-button Mega Drive standard controller and newer six-button controllers. 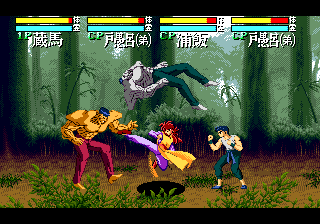 The A & B button serve as strong and weak attacks respectively, with C acting as a necessary block button due to the multi-directional, battle royal nature of the combat. On a six-button controller, the Y button is used for shifting between the foreground and background planes, while X & Z handle forward and back dashing depending upon which direction your fighter is facing. Holding down either of the attack buttons at any time recharges your Ki (energy) bar that is used for special attacks. These three actions translated surprisingly well to the reduced capacity of the standard three-button controller, with a combination of C + Up as plane shift, B + C as back dash, and a double-tap forward for forward dash. Those who only have three-button controllers are still playing with a small handicap, but the best players can play either way just as well, with some even favoring the three-button setup. This attention given to control allows anyone to quickly develop technique and even manages to keep button-mashers at bay, though they too can be competitive with a modicum of practice.

Specials are performed via easy to remember and execute Street Fighter II style quarter-circles and the like, with some projectile attacks having a charge ability achieved by continuing to hold the attack button upon completion of the controller motion. This leaves the player vulnerable to attack, much like when charging the Ki gauge, but if the player changes direction while charging the projectile, the move will cancel. In a lesser game, this would have translated into a lost move and waste of effort, but in Yu Yu Hakusho, the charge is retained and then discharged in the next use of the projectile attack. The charge can be held indefinitely and combined into a combo for devastating results. There is an incredible amount of strategy buried in the combat.

The tempo of the fighting in Yu Yu Hakusho also separates it from the pack of Steet Fighter II clones. The readiness of dashing & plane shifting, coupled with the fast melee combat & spectacular projectile attack system create hectic, though entirely manageable 4-player chaos. Projectile attacks are considerably weaker than the normal punches & kicks, more so than in any other fighting game at the time, which balances the far & near combat. The fact that matches are single round, un-timed free-for-alls was also something different. Everything just clicks, and it’s just an absolute blast to play with a couple friends and a multi-tap. 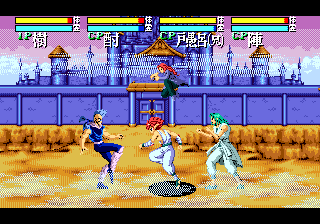 In addition to having one of the most addictive and entertaining fighting systems ever conceived, Yu Yu Hakusho is a beautiful game both visually and aurally. All of the 11 characters are of differing heights, have unique features & moves, are well-animated (though not as well as in something like Street Fighrer II or King of Fighters), and actually scale – very impressive for the Mega Drive! – when they move between the two planes of the battlefield. Each has 3 color schemes that can be selected by pressing A, B or C at character select screen; A being the default. There are also nice detailed character portraits that appear next to the life & Ki gauges, as well as in pre & post fight sequences. The only negative is that some of the characters look a bit too similar in their white tunics, but that is more a fault of the license. It is a non-issue for fans of the anime.

The 8 backgrounds are a cornucopia of intense parallax, line-scrolling, fore & background transparencies, and warping effects. One backdrop has a shimmering lake that the fighters appear to fight around due to the speed of the parallax. In another, a fortress is connected to the foreground by a line-scrolled, pseudo-3D land bridge over a chasm. There are also transparent clouds that move across the face of the fortress. The colosseum background gradually moves from morning to evening throughout the fight. There is even a floating space junk stage that could be straight out of a horizontally-scrolling shoot-em-up, punctuated by several planes of warping starfields. The least impressive of the backgrounds takes place in a gloomy forest, but even it manages to have impressive foreground grass, line-scrolling and parallax.

All of these strengths make Yu Yu Hakusho the quintessential game that one must see in motion to appreciate. Screenshots absolutely cannot do it justice, especially since they shine a bright light on the dithering that does occur due to the limited color palette. Though letterboxed, the game manages to have 4 unique fighters onscreen simultaneously fighting in front of its effect-filled backgrounds; all with little to no slowdown present. It is a great achievement and yet another testament to the power of the Mega Drive. If it weren’t for the aforementioned dithering, one could easily mistake this title for a Sega Saturn game.

The graphics outdo the sound a bit, as the soundtrack is standard fare that works well enough, but isn’t overly spectacular. As it stands, the music is forgettable in comparison to something like Gunstar Heroes or Alien Soldier. The game does excel in the sound effect arena. Yu Yu Hakusho sports some of the best voices in any Mega Drive game. The sample rate isn’t as high as it would be on a system like the SNES, but there is a plethora of voice samples used throughout the game that sound great and add to the overall picture. They are all leagues better than the experience-killing samples in Street Fighter II: Championship Edition. Battle sounds are also varied, bombastic and well-sampled; unlike SFII: CE‘s meager sound library.

This game is just great. It manages to be one of the best anime license games ever produced, and stand toe to toe with the most legendary of tournament fighting games. It far surpasses any of the Dragonball Z and Ranma 1/2 fighters that were being fluffed by the gaming press at the time. This all does come at a cost though, both literally and figuratively. Yū Yū Hakusho: Makyō Tōitsusen received a regular release in Japan and was also later published by Tec Toy for the Mega Drive in Brazil under the name Yu Yu Hakusho: Sunset Fighters. It wasn’t released in either the US or Europe. The Mega Drive did not do as well commercially in Japan as it did in the US, so even a regular release meant that a paltry amount of copies were fed into the market. There are probably even fewer copies of the Brazilian release floating around out there.

In terms of regional differences, the only real change between the two is language. The Japanese version has menus that are almost exclusively in Japanese, so it requires at bit of deciphering and/or trial and error with the menus, especially when using the copious single match & tournament modes. The Brazilian release has Portuguese text, and romanized character names, although a few names were truncated or changed entirely.

This game is worthwhile investment for the fighting or Treasure collector, but a bit too dated for the mainstream, Yu Yu Hakusho sadly remains an insignificant footnote in gaming history. THQ holds the Yu Yu Hakusho license in the US, so this game will most likely never see the light of day here.

The main character of Yu Yu Hakusho, Yusuke is a somewhat belligerent teenager who had the misfortune of getting hit by a car. However, the land of the dead is not exactly expecting him, and assigns him to work as a “spirit detective”, investigating demon matters in the human world.

A calm and collected demon who can summon plants, including a rose whip. He’s actually an incarnation of a fox spirit.

A fighter from the spirit world who takes Yusuke under her wing and trains him in fighting techniques.

Another demon compatriot, the happy-go-lucky Jin utilizes the power of wind to take down his opponents.

A fire demon who can use a special kind of power called “Jagan” skills. He also possesses a tremendous sense of speed.

A fellow classmate and one time rival of Yusuke, the two eventually become friends. Kuwabara is one of the few main characters from the human world, although he can still interact with spirits.

A former spirit detective, much like Yusuke, Shinobu has since turned to the evil side. He has seven split personalities, and has the power of Seikouki, a powerful holy energy. He also leads a group known as the Sensui Seven.

Sensui’s partner and one of Sensui’s Seven. The requisite pretty boy, basically.

A demon who follows the way of the drunken fist, so he’s naturally a bit of a lush.

One of the series’ antagonists, the younger Toguro is an almost freakishly huge dude. He possesses the power of muscle manipulation, and must feast on a steady diet of souls to keep himself powered.

This sadistic bastard sits on his “little” brother’s shoulder. He can alter the shape on his body to create weapons, and possesses regenerative powers as well.