Eight years after the original Saturn game, Treasure released Advance Guardian Heroes for the Game Boy Advance. It’s proven to be one of Treasure’s most controversial titles, for a number of reasons. It’s technically the first “true” sequel to come out of the company, and yet it’s so far removed from the Saturn title that, at first, it may as well be a completely different game.

The story takes place hundreds of years after the original, long after the cast members of original game have died off. Technology has matured in the world of Guardian Heroes, and now the planet is filled with spaceships, floating fortresses, and even more robots. However, not all is right in the land. Kanon and Zur have somehow been reincarnated, and have possessed the souls of the old protagonists. There’s some kind of master plan at work to take over the world, but that’s anyone’s best guess, because the storyline is a complete mess. This is largely due to the incredibly poor translation, the likes of which haven’t been seen since the 16-bit days. It’s full of awkward phrasing, overtly literal translations, and just plain confusing language. They didn’t even bother to keep the spelling of the names consistent with the original game. However, the setting is actually meant to bridge the timeline between the original Guardian Heroes and Gunstar Heroes. Professor Brown from this game eventually grows into Professor White, your commander from Gunstar Heroes. 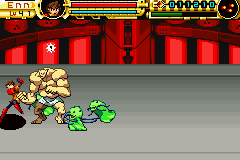 A lot has changed for this sequel. The multi-plane system has been ditched and changed to a traditional beat-em-up playing field where that you can move up and down freely. There are still stats to upgrade, but the multiple paths have been removed completely. The Golden Warrior itself is completely gone, and there’s no other AI companion to take its place.

There are three main playable characters: Enn, Hyu and Ray, each with the power of fire, wind, and ice, respectively. There’s also Dylan, one of the primary antagonists working on conjunction with Kanon and Zur, whom you’ll fight several times through the game.

The new characters are dorky, stick-thin little scamps, without even the common sense to carry a weapon. They have no personalities; they never speak; and their names and characteristics are a little too close to the girls from Magic Knight Rayearth. The only real difference between them, other than their color and starting statistics, are their magic attacks. In other words, they’re all pretty lame. 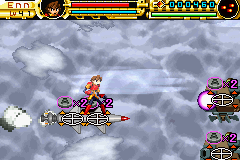 But looks, thankfully, are deceiving, and the new generation of Guardian Heroes can still pack a bit of a wallop. By standing still and pressing the B button, you’ll execute a flurry of punches, but hold right or left, and you’ll use a power attack that wallops enemies across the screen, hurling their limp bodies and knocking over other foes.. If you hold down and press B, you’ll slam your fist into ground, causing all enemies surrounding you to be knocked off their feet. You can also cast magic by holding down the R trigger and pressing B. These attacks are weak at first, but can be slowly powered up over the course of the game. There’s also a hyper gauge that builds up as you take damage – press both buttons simultaneously, and you’ll temporarily turn into a blazing fast enemy beating machine. Button mashing while you’re being attacked actually fills this gauge faster.

These attacks are powerful, but your character’s mobility is what sets this apart from other beat-em-ups. By holding Up and pressing the B button, you can knock your foes into the air, leap into the air with a flying uppercut, and continue to kick them in mid-air until they hit the ground. By far the most useful are the homing attacks. If you’re in the air, you can press Down and B to hurl yourself into the nearest foe. If you’re on the ground, you can double tap forward and press B to launch a flying punch, which will automatically target the closest foe and pummel through them. Although you never quite face as many foes at once as you did in the Saturn game, these techniques allow you to easily clear the screen of enemies, regardless of their position. It’s interesting on how Guardian Heroes played a role in inspiring Arc System’s Guilty Gear, but these homing dashes are essentially the predecessor used in later fighting games such as Arc System’s Hokuto no Ken (2006) and Examu’s Arcana Heart (2007). 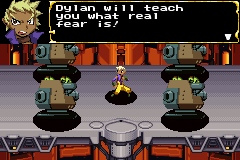 Almost as important as the homing strikes is the ability to counter and parry enemy attacks. Normally, you can press the R button to block. However, if the enemy is about to attack and you time your block just right, you’ll stun them and leave them open for a counter attack. If you can properly block a projectile, you’ll reflect their attack right back at them, similar to the melee move from Treasure’s Sin & Punishment for the Nintendo 64. The catch is, you need to time it exactly right. The timing is generous, since the enemies will usually pause with a little exclamation point over their head before they attack. But if you keep mashing the block button, you’ll eventually drain your magic meter, effectively leaving you helpless. The final encounter features a harrowing segment where you need to counterattack within tenth of a second – miss, and you need to restart the battle. Rough, perhaps, but undoubtedly tense.

Some of these changes may seem pretty drastic, and while they’re well intentioned, they’re not as well implemented as one would hope. The action is missing the frantic pace of the original Guardian Heroes, so the game feels a bit sluggish, and almost all of your moves have fairly long charge and recovery animations. There’s some notable slowdown at certain points that tends to hampers certain segments, but it never gets as bad as the Saturn original. 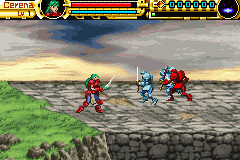 Apart from the unique fighting mechanics, Treasure also decided to try some wacky experiments with the concept of player death. If you’re slain, the demon lying within your soul offers to make a pact – you can either perish or give you body to him. If you perish, then you need to restart the level at the last checkpoint. If you succumb, you’re allowed to play for a few moments in devil form, before fading away for good. This may seem silly, but it can potentially allow you learn enemy attack patterns or better prepare for enemies that came later in the stage. It’s also the key to get the second (worse) ending. You can also upgrade your stats after each level, although you need to pick up crystals left by fallen enemies if you want to gain experience.

Although there are only six levels, they’re pretty huge, and the game takes well over an hour to play all the way through. There’s a bit more variety to the levels than the original game – one level takes place on a raft, showing off some impressive scaling effects, and another features your characters hovering above a highway in a high velocity chase. There are a couple of cool boss battles, but they’re few and far between. Most of the major fights consist of fighting and refighting the same giant robots or cyclopses, or numerous bouts against Dylan and Zur. There are a few segments where you’re falling through the sky and need to hop on various platforms to keep safe – you leap from rock to rock by hitting the direction and double tapping the A button. It’s supposed to be tense, but it kinda falls flat. 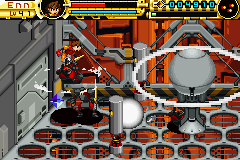 At various points, you get to fight against the old Guardian Heroes folks as midbosses. These fights aren’t particularly interesting, but they do set the fanboy gears in motion. After defeating them, you’ll obtain their soul, which will enhance one of your statistics. At this point, it would’ve made sense to be able to play as them, but that isn’t quite the way it works out. Like the original, you can control any of the characters, friend or foe. Unlike the original, you can use them in the standard story mode, although it doesn’t affect the plot. In order to unlock them, you either need to donate crystals during the main game – thereby diverting them from strengthening your character – or repeatedly complete the Time Attack mode, which is opened up when you beat the game on Normal difficulty. After completing this numerous times, you can finally play as Han, Ginjirou, Valgar, Randy, Cerena, Nicole and Randy. They all basically look and animate the same as they did before, although they’ve been resized to fit on the GBA screen, and they all play differently than the main cast. This is actually one of the most rewarding parts of the game, and it’s heart-breakingly confusing that Treasure buried it so deeply. 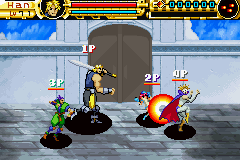 Although there are some cool graphical effects, most of the visuals are pretty average. As noted, HAN’s character designs are a bit lame, and the older characters look a bit cartoonier – Nicole, in particular, almost looks like a doppelganger of Marina from Mischief Makers. The music suffers from the usual low fidelity audio of the Game Boy Advance, but the actual composition quality is quite good. 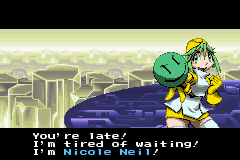 Advance Guardian Heroes tends to get shunned by fans because it removed so many of the coolest aspects of the Saturn game, and this reaction is definitely understandable. This feels like a very different game, and the absence of the iconic Golden Warrior or the expansive story branches just hammers that in. But they’ve also refined the core mechanics and level design into a much more developed game, one that requires a bit more technique. It definitely lacks the over-the-top anarchy of the original game, but Advance Guardian Heroes is still an outstanding title in its own right, and deserves a place next to Double Dragon Advance as one of the best beat-em-ups on the Game Boy Advance.