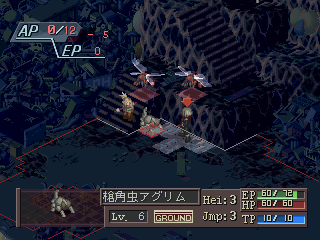 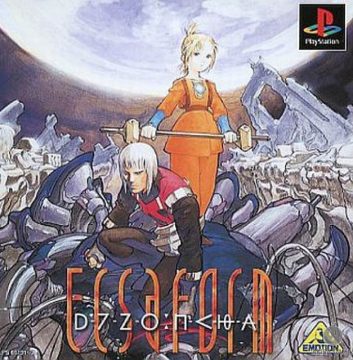 Seseri is a young girl in the kingdom of Solpagania, the subject of various biological experimentations. While in the lab, she discovers a robotic being named Bead, who has been uncovered from ancient ruins. Upon awakening, the two escape from their prison and reach the surface, where they discover a world in disarray.

Ecsaform‘s plot is so ambitious that the entire second disc is a database devoted to explaining the background, setting, and terminology, and is filled with images and character sketches. One of the best things about the game is its worldview, a blending of science fiction and fantasy, with character artwork by illustrator Seiji Tada.

Publisher Bandai Visual was typically known for anime tie-ins, and this certainly has the groundwork for an excellent story. Unfortunately not nearly enough of that manifests in the game itself, likely as a result of a low budget or rushed development. The supplementary art is gorgeous but the in-game graphics look like a poor Super Famicom game. It’s a turn-based SRPG, with a large number of battles, but it’s completely linear, interconnected with areas where you run around and perhaps do some shopping before you stumble on the next trigger. Although it’s obscure even in Japan, one of the few things anyone really remembers about it is the curious number and variety of toilets, each given their own special, tiny rooms. It’s particularly curious touch given the sparse population of the post-apocalyptic landscape.

Still, Ecsaform holds up thanks to some interesting twists on the battle system. Like the SFC SRPG Energy Breaker, each turn your character is granted a limited number of Action Points (AP) to move, attack, or use items. However, if you end a turn with unused AP, your turn may come around quicker and let you move before enemy units, similar to Final Fantasy Tactics. In a further twist, you also have the option to convert the unused AP into Extra Points (EP), which acts as a secondary life meter and depletes before your main HP. EP has the ability to regenerate but HP does not, so managing it like a shield is important, and picking which option to use at the end of your turn allows for a variety of offensive and defensive strategies. So while the story itself is interesting if somewhat of a missed opportunity, Escaform still has something intriguing to offer SRPG fans, even if the balance is a little weird.