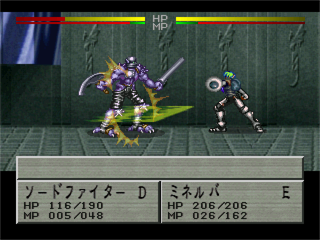 In 1997, Max Entertainment decided to develop a sequel on the eve of the worldwide RPG craze. Feda 2: White Surge the Platoon is set eight years after the events of Feda: The Emblem of Justice. With the Skudelian peninsula having reached independence from the Empire, the mainland is beginning to show its cracks. The western and eastern regions of the mainland are currently going through a civil war fighting for independence. Meanwhile, there’s also racial tensions between the Dragonewt race and the minorities living in the mainland. The story follows Harvey Winston, a young soldier who is part of the military unit “White Surge” with his fellow allies. They move around the mainland to quell the conflict.

Coming from a family of elite soldiers, he enlists himself to the army because he is concerned of the destitute state of humankind.

A minor character from Feda 1 now takes the role of second-in-command. Because he was involved with the liberation of the Skudelian peninsula, he has volunteered to become part of White Surge. Still retaining his optimism, he plans follow his sister’s anti-war philosophy.

She was once part of a group of elite soldiers. However, a political scandal occured which demoted her to a low ranking postion.

She is part of a calvary unit along with her two-headed dragon, Shellfer. Her family was part of a prominent defense force that served the Hegkmeyer family.

A veteran soldier from the Millennial war. He has extensive knowledge of explosive firearms. Despite of his intelligence, he is a heavy drinker. Often times, he would present himself in the battlefield drunk. 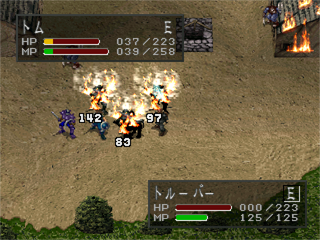 Feda 2: White Surge the Platoon is a huge departure from its predecessor. It takes away the Shining Force feel and follows the conventional tactical RPG route. You no longer have the freedom to walk around anywhere and you are pretty much stuck inside your base until you start the battle. What’s even more shocking is that many of the gameplay aspects that were established in Feda: The Emblem of Justice were no longer applicable in Feda 2. The alignment system that was once highly emphasized in the previous installment does not exist in the sequel. With the abolition of the system, the amount of recruitable characters has been drastically reduced, as well. You can actually can get all of the characters in a single playthrough as long as you follow directions accordingly. The battle flow in Feda 2 has some alterations, too. When you engage your opponent, you’ll not be presented with flashy animations like those found in Feda: The Emblem of Justice. Instead, you’ll see an animation similar to Fire Emblem, showing the two opponents fight against each other in one screen. Even though they’re not the most fluidly animated sprites of all time, the pacing is actually much quicker.

The fundamental concept of the Ranking System is still retained; but not without some significant changes to the formula. Each of the missions still have numerous objectives and it’s up to you to follow orders or not. If you decide to defy orders, be prepared to suffer the consequences. The battlefield will change drastically according to the situation. For example, suppose there’s a mission that tells you to sneak in and kill the leader without being detected by other enemy units. If you decide to rush in, the enemy units will call in reinforcements and the enemy leader will protect himself. As a result, the duration of the battle could last much longer than usual. 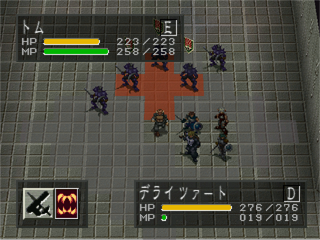 Depending on what you do in battle, you’ll be rewarded with experience bonuses. Alongside with experience bonuses, if you managed your allies properly, there’s a good chance that you’ll impress some of the NPCs and they will join you in battle. At the end of the battle, you’ll be shown your ranking. It folloss the same order as before: Feda is the highest rank while Genocide is on the opposite end. The rankings determine the amount of OPM you will recieve. OPM is basically an evaluation on how much supply and goods will be sent in for your base. Obviously, if you perform well, more goods will ship in. Even if you perform poorly, supplies will still be sent, but in lower quantities. 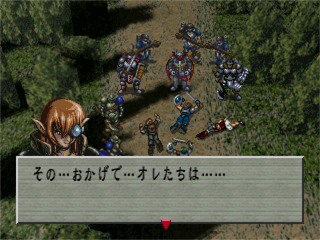 Balancing the fact that there are less characters to recruit, many of the characters can change classes. For example, Minerva Lilac can battle without her mount, drastically changing her moveset. There are some characters who can specialize on certain elements. Tom Woodland’s initial class can use fire-elemental magic; while his second class specializes on ice-elemental magic. Feda 2 has many returning characters from the first game; some of which come pretty surprising. With all of the changes, the overall difficulty is much more challenging than Feda 1. You really need to manage your characters carefully because many of the missions require you to keep all of your allies alive throughout the the fight. Feda 2 encourages you to follow directions rather than disobeying them. 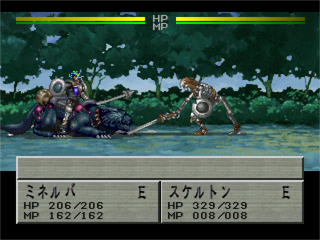 In general, the graphics have aged quite poorly. Many of the animations are very stiff and lack detail. 1997 is also the year where FMV sequences in video games were all the rage. So, you’ll get the chance to question the developer’s decisions with their ten minute live-action opening intro. The majority of the music consists of remixes from the first game with just a couple of original tunes thrown in. Overall, many players of the first game might be turned off by Feda 2 at first, due to the drastic departure from the first game. The story of this game, however, certainly keeps its ties with Feda 1. The interactions with returning characters flesh out their backstory much further. Finally, if you find that Feda: The Emblem of Justice is a complete pushover, you’ll certainly think otherwise for Feda 2: White Surge of the Platoon.

Feda: The Emblem of Justice