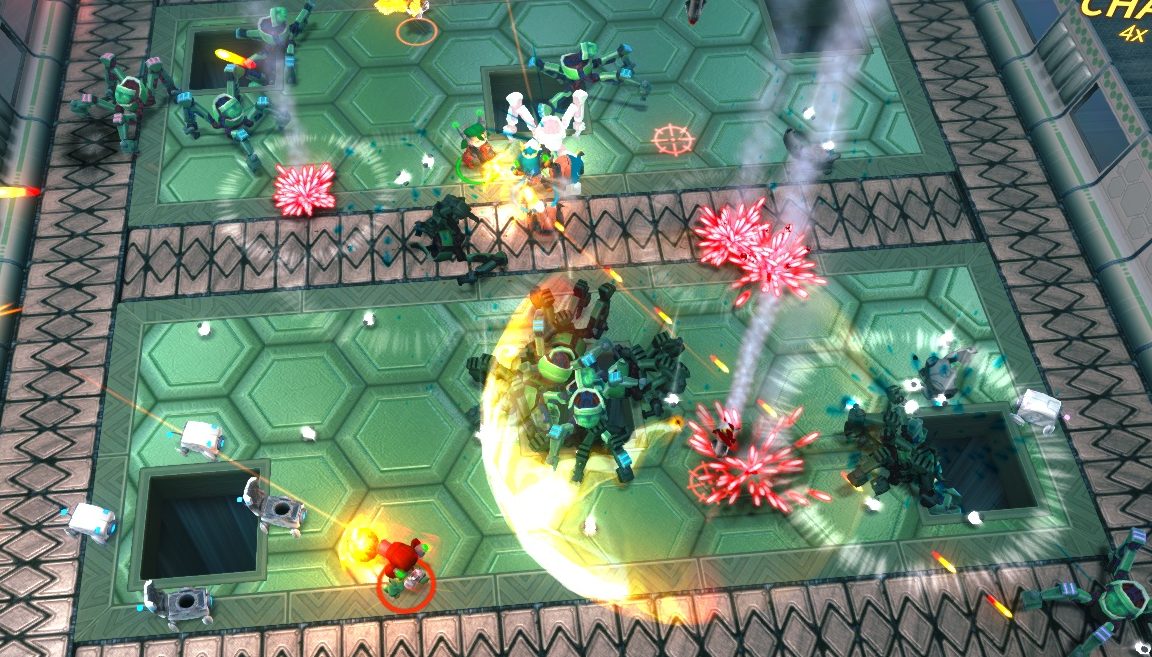 When Geometry Wars was released for the Xbox 360 in 2005, it sparked a resurgence of arcade-style dual stick shooters. However, it was so popular that it was followed up by so many similar games – Housemarque’s Super Stardust HD, Queasy Games’s Everyday Shooter, Sierra’s Assault Heroes, half a billion XBLIG games featuring zombies – that the revival was run into the ground. In 2015, Australian game studio Witch Beam revitalized the twin-stick shooter with Assault Android Cactus, which takes the classic template of Robotron 2084 and Geometry Wars, and fuses them with the scoring mechanics and bullets patterns of a modern Japanese shoot-em-up. 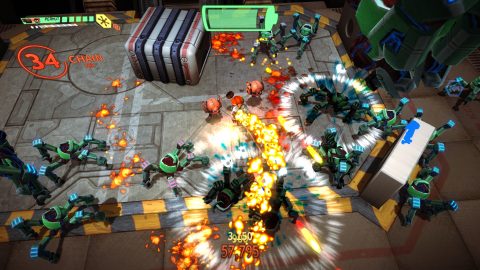 You control a squadron of cutesy little androids, fighting hordes of sentient robots that have run amok on a spaceship. Though there’s only one at the beginning – the titular green-haired Cactus – you’ll unlock more of them as you progress through the game, with nine in total. Each has two types of attacks, a regular shot, which can be fired at will, and a more powerful alternate weapon that can only be used for a second or two before it needs to cool down. For example, Cactus has a standard machine gun, along with a flamethrower, which is short ranged but very powerful. Coral has a shotgun, which is strong and has a wide but short range, along with a plasma field, which will place a small bulb of destruction that will crush anything that comes near it. Lemon has a spread shot along with rockets. By default, you need to hold down a trigger button to fire, in addition to aiming with the right analog stick (or mouse), because not all of the weapons are meant for rapid fire, like Shiitake’s railgun. But you can change this in the options menu, which works to prevent potential hand cramping during long play sessions. It also supports up to four players in co-op, though only locally. 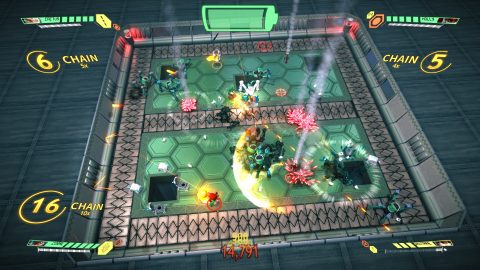 Unlike many other twin stick shooters, which random generate enemies placement, each of the game’s 25 stages are structured the same every time. However, the type of stage can vary – some are simple arenas, others are gigantic rooms that change shape and layout as the level progresses. Some take place on trains, others are short corridors. Although you could survive levels in Geometry Wars and the like by using broad strategies, Assault Android Cactusrequests that you learn the nature of each individual stage and how to approach it. Despite their differences, the commonality is all stages is that they get absolutely flooded with armored robots, and even when your weapon is at the highest strength, there’s no way you can just blast through all of them. Instead, much of the game is focused around navigating around the crowd and reducing damage as much as possible. 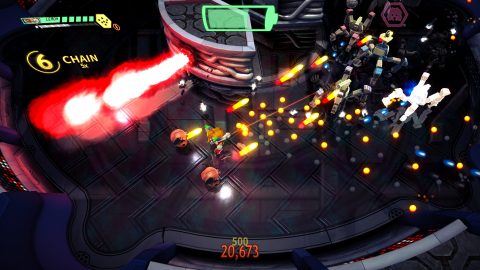 The biggest philosophical change of Assault Android Cactus compared to others is that it understands that you’ll probably take some amount of damage, given how crowded the screen gets, so the goal is to minimize it rather than avoiding it outright. This is reflected in how the damage system works – you can take a few hits before being knocked to the ground, after which you need to mash buttons to get back up. If you do manage to take a few nicks, then after a few seconds your health will recharge to full. There are no lives, but rather a battery that slowly drains over the course of the level. Battery recharges are regularly dropped after defeating waves of enemies (and helpfully indicated with both a verbal cue from your robot and a green arrow to show where it is amidst the chaos), so as long as you keep destroying enemies while avoiding getting knocked to the ground too much, you can keep in the game. 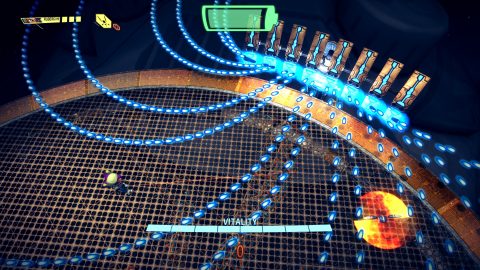 The bullet hell stylings of one of the bosses

Many of the larger enemies, particularly the bosses but also some of the turrets, fire in dense bullet hell-style patterns. Gamers familiar with Cave shooters might expect to be able to weave through the small gaps between each bullet, but the hitboxes on your android aren’t small enough to pull this off. However, again, since you can technically take a few hits without any penalty, you can maneuver in a way that you only take one or two pelts and then stay safe long enough for your health to recharge. Plus, running into most robots won’t actually hurt you, unless they’re the annoying mines that like to explode when you get near them. The game is full of little tactics that help you out in situations like these. Switching between weapons will grant you a split second of invulnerability, allowing you to dodge effortless through fire if timed properly. When you do get knocked down, you’ll jump back up with a power wave that knocks back any enemies, and recharges your secondary weapon, giving you a bit of extra room to breathe. 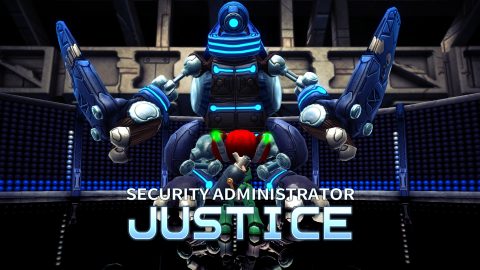 There are also other regularly dropped power-ups, of three different colors, to help you out. Red will provide you with orbs that will provide extra machine gun power, which is especially important for the androids that otherwise have short range weapons. Yellow will provide a boost that will greatly increase your speed, while Blue will provide invulnerability and knock out all enemies on the field for a few seconds. Every time one of these power-ups is dropped, it cycles between the three colors, so as long as you’re patient, you can get the upgrade you want. Although each is limited for a certain amount of time, they appear regularly enough that you can have more than one activated at a time, or stack power-ups so that they last longer. 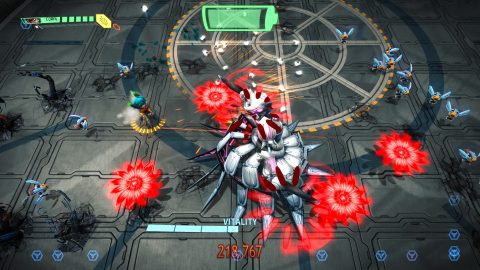 This approach gives Assault Android Cactus appeal to both casual and hardcore audiences. Battery recharges are common enough that as long as you don’t completely screw up, you can probably limp your way to the end of the stage, at least enough to complete the levels and unlock the other androids. (The bosses are an exception – they really do provide challenge, especially the final one.) However, the real fun comes in playing for score, optimizing your play through each stage to rank as highly as possible. Keeping a high combo chain going, which provides score multipliers, is half the strategy to rack up points, but the other half is simply to not get knocked down, because that not only ruins your combo but also knocks about 10% off your score. It’s not a game that demands perfection, but it does reward it, as the glory of earning an S+ in a stage remains a lofty but not insurmountable goal. 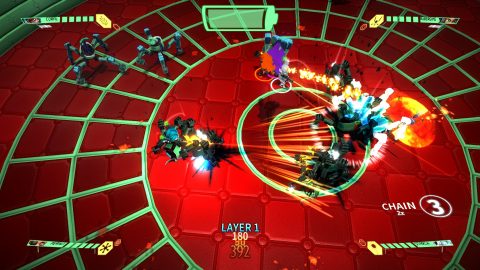 Each stage has its own global leaderboard, though it’s not separated by android. Still, it is possible to get S+ ranks with all of the characters, despite some of their drawbacks, particularly the ones that rely on short range weapons. On the player end, however, it does keep track of the highest score in a level with each character. There’s also the Infinity Drive mode, which tosses enemies, bosses, and level configurations out you until you become overwhelmed, and a Daily Drive mode, which is similar but changes the patterns up every day. 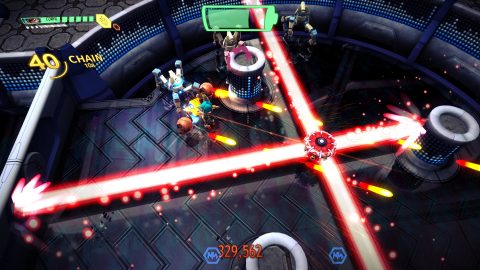 Those red laser beams will knock your down instantly

Gaining high scores will also give you credits to unlock assorted things. Many of these are just concept art and other stuff like that, but there are also EX Options that will activate AI companions or do gimmicky things like let you play in first person mode (which is barely functional but fun to mess around with). It’s a nice addition, though the main thrill is still trying to improve your performance just enough to beat your friends and climb through the ranks. 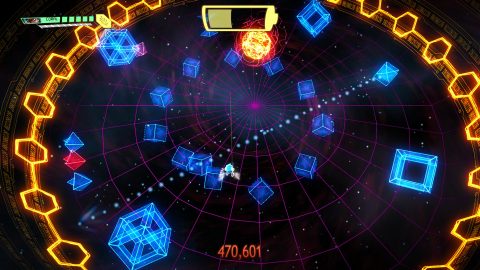 Visually, the game might not all that interesting at first glance, but the game runs smoothly and the robots are extremely well animated, clambering with insect-like precision. Despite being built in Unity, it runs very smoothly on the PlayStation 4, unlike some other indie games for the console. The most distinct area is the third stage, with walls featuring equalizers that play along with the beat of the music. The chibi female androids look a bit silly at first, but they’re a remarkably charming bunch, with quite a lot of personality imbued in this crew with just a few subtle techniques. There’s no dialogue, but each has a unique animation when selected, along with distinct speech patterns for their voice clips and a brief blurb of text that indicates their background. The most amusing is Starch, who appears as grey blank slate without any hair or other distinguishing features, but talks mostly in nonsense gibberish, refers to speed power-ups as “pretty wings”, and sticks her finger in her nose, lamenting that “everything’s dead” upon completing a level. 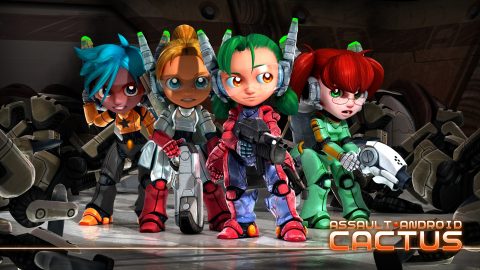 The music is also fantastic, a catchy collection of electronic tunes that liberally sprinkle in chiptune influence while still maintaining a modern sound. The level themes in the early game are more upbeat, with the later ones growing darker. The bosses also each have their own unique song, each having a harder edge than the level themes. There’s also a vocal theme that appears whenever you run out of power, sung with digitally altered vocals, which is simultaneously silly and cute. 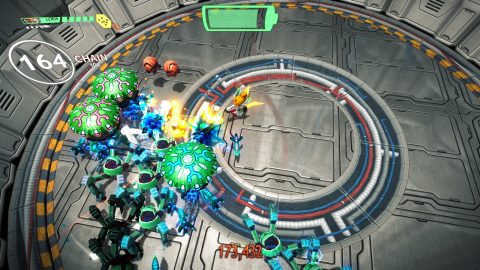 There’s really not a single bad thing about Assault Android Cactus. It effortlessly updates a classic genre with modern sensibilities, while learning lessons from all of the other twin-stick shooters, balancing the tough act between “approachable” and “demanding”, and wrapping it up in a charming package. It’s easily one of the best of its kind since Geometry Wars, and in many ways exceeds it.