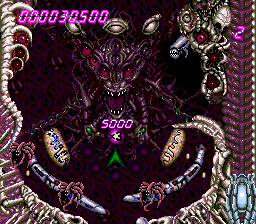 In video games, pinball is a genre that has never had quite as much variation from one game to another. You can be certain what to expect, and what not to expect, before you even play the games. Its simplistic premise is what makes it such a brilliant a game, but it also means that every game is pretty much the same basic thing. You launch a ball onto the playing field, gravity brings it down the slanted table, and you hit it back up with the flippers and try to keep it from going past them for as long as possible. What you are generally not going to get is flashy graphics, characters, boss fights, areas to explore, and the many other elements of the “bigger and better” game design philosophy that innumerable games are designed with these days. It’s not exactly for everybody, so developers have on occasion tried to expand its appeal or at least make it more eye catching with hopes that when it gets people’s attention, there will be a higher chance of it attracting people to the core game play.

The first series to successfully do this is a quadrilogy of games that go back as far as 1989 and are informally referred to as “Crush Pinball”, which were developed by Compile. Crush Pinball began on the tragically ill-fated TurboGrafx-16. It began with Alien Crush and spawned two sequels on three platforms, as well as a modified port of the second game and a bastard child offshot. It has accomplished something over the years since that virtually no other pinball video games have accomplished – it has developed a significant cult following. Very rarely do pinball video games ever obtain “classic” status, but Crush Pinball has been able to do just that. The first two are frequently cited on internet forums as forgotten gems for their respective consoles. That’s exactly what the Crush Pinball series is: absolute masterpieces and great introductions to video pinball. They are pinball games enjoyable even by people who don’t like pinball.

So what makes these pinball games so great? After all they have the same structure that every other game in the genre has. So why the dedicated following? Chiefly, it’s because they have the flash that other pinball video games lack in their production. There are fantasy themes, huge monsters that roam around the table, secret areas to access and play separately from the primary table, boss fights against giant monsters – and your only weapon against all of this chaos is a pinball. From a pinball fan’s perspective this is worth trying just for the sake of novelty, and for everybody else it’s an effective means of catching their attention by mixing more familiar elements with the pinball experience. After the games have your attention you’ll not only find four of the best pinball video games ever made, but pinball games that transcend their genre.

When the Crush Pinball series began, most pinball games had mediocre ball physics that have aged poorly over time. Crush Pinball’s ball physics still stand up. The first game has physics that were without peer in 1989 and they still provide for an extremely playable and fun experience today. They are not flawless recreations of the real thing, but no pinball video game is even to this day. 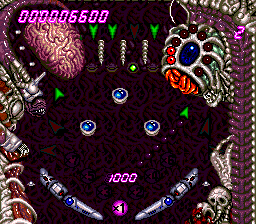 While not an official licensed game, the “Alien” in “Alien Crush” obviously refers to the Hollywood movie of the same name. Alien Crush wears its Geiger influence on its sleeve, and no attempt whatsoever is made to hide this fact. The pinball table that most of the game takes place on is made up of Geiger-esque designs. The background of the lower portion of the table has an intricately detailed creature with many eyes, which resembles some of Geigers’ works. The walls of the table are made up of what looks like vertebrae, and create an effect very similar to Geiger’s laboriously detailed biomechanical landscapes. A few of the targets even look like the elongated jaws and skulls of the aliens from the Alien movies.

Alien Crush is just a great, great looking game, and its graphical details go far beyond its Alien/Geiger influenced aesthetics. Stationary targets will fidget around during play and twitch when they get hit. Hitting the targets that look like eyes will make them open, and hitting the bumpers will make them “blink”. Activating stoppers will make bones elongate to protect the exit lanes or a skull will appear between the flippers to act as a stopper. After the ball is shot into the “mouth” of a target it will be chewed on before being spit back out onto the table. The color palette consists primarily of earth tones with bits of cold metallics and splashes of neons – all working together well for the Geiger-esque aesthetic. Contrasting the look of the primary table, each of the hidden tables has a more machine-like look to it. The presentation is definitely focused on graphics, but Alien Crush‘s designers didn’t neglect its music either. There are two pieces of music composed for the game, and you choose which of the two is played in the background from the startup screen before beginning each game. This awesome presentation doesn’t mean much of anything if the game isn’t up to par, but luckily Alien Crush plays even better than it looks.

Each game of Alien Crush begins by choosing the ball’s speed (fast or slow) from the startup screen. Of course, “fast” is more challenging, and “slow” is better for beginners, but the ball never moves too fast or too slow, regardless of speed setting. Both speed settings are completely playable, regardless of your skill level. The directional pad controls the left flipper, button I controls the right flipper, and button II nudges the table. The game’s primary table is split into two screen sized areas that the screen will instantly switch between when the ball moves from one to the other. This allows a multi-level table to be displayed with large sprites while keeping everything still and the flippers visible at all times. This method of switching screens to simulate the full length of a classic pinball table on your TV screen would later show up in other games like Kirby’s Pinball Land and Battle Pinball. Each level of the table has two flippers at the bottom below a myriad of targets. The upper portion has multiple targets along the left and right walls, three bumpers that are well placed enough to leave a perfect amount of space between them and on the table, and, to the upper left, the biggest brain outside of Metroid, which the ball can be hit around for points. The lower portion has three targets to the left, three to the right, and three at the upper middle of the screen. There is a giant creature in the middle of the background that can’t be hit, but if it’s activated than shooting the ball into its mouth will get you varying amounts of points. Occasionally three creatures will crawl across the screen here and they can be shot for points. 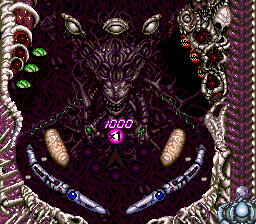 There are also secret tables that can be reached by shooting certain targets when they are lit up. Other than a few color palette differences, each of these has the same basic design – two flippers at the bottom of a screen sized table with a hole at the bottom left and another at the upper right that will launch the ball back out if they are entered. What differentiates each hidden table from the rest is that each has a different set of enemies roaming the table, and each group of enemies has their own pattern of movement. The giant caterpillar-looking thing that breaks into pieces can be dealt with pretty easily by holding the ball with either of the flippers and letting each segment walk into the ball. If it doesn’t quite walk directly into the ball than giving the flipper a quick flick while holding the ball will cause a short bounce that will easily hit any segment that is approaching the flipper. An extra ball and one million points can be acquired from a stage with squids and skulls by destroying everything except a lone skull, then waiting for a pterodactyl to appear and then shooting it. Yet another stage has squids and four monsters that look like Slimer from Ghostbusters. Overall the game’s secret tables provide a nice variety of scoring options.

While Alien Crush has aged remarkably well, some feel two of its sequels surpass it in quality. However, while later Crush Pinball games have more secret areas and larger tables, Alien Crush remains the most balanced. It provides an equally fun experience to both newcomers as well as experts. Sadly, while it is well remembered by anyone who has played it, it received no ports to other consoles, causing it to languish in obscurity. Thankfully, for those who do not possess a TurboGrafx-16 the game has been made available for download on the Wii Virtual Console and then later on the PlayStation Network.