Released as a followup to Lucasfilm’s massively popular Maniac Mansion, Zak McKracken and the Alien Mindbenders never quite garnered the same respect. There are any number of reasons – it never received a console port, nor any follow-ups, and all that remains of its legacy is a rather aged game with a small cult following.

Zak McKracken is a tabloid reporter who aspires to cover some real news, instead of just making it up. He’s haunted by dreams of an alien civilization, of Mars, and of a beautiful woman, which begins to creep him out when these aspects begin seeping into real life. (Parts of it do bear some passing resemblance to the movie Total Recall, which was released the year after.) An alien race known as the Caponians have in fact invaded the planet, disguised in those Groucho Marx glasses/nose/mustache masks, and secretly running the telephone company. Their plan? To turn to the entirety of the population into mindless drones via electric buzzing. Zak becomes intertwined with the woman of his dreams, a scientist named Annie, as well two Yale coeds named Melissa and Leslie, who have already begun an expedition on Mars. Only by uncovering the secrets of a long departed alien race can Zak and his compatriots foil the Caponians and the save the minds of humanity. 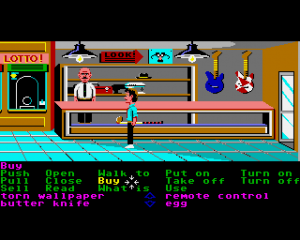 Zak McKracken’s adventure is heavily influenced by the postmodern New Age movement, especially its fascination with Stonehenge, the Mexican and Egyptian pyramids, and their connection with extraterrestrial life, along with a visit or two to various spiritual gurus and tribes. There’s also a bit of conspiracy theory humor, what with the alien king actually being (or claiming to be) Elvis himself. A good chunk of the game involves Zak jetting across the globe to these different locations, solving their mysteries, and eventually uncovering two sacred crystals – one which can control animals, the other that can allow teleportation. Like Maniac Mansion, there are multiple characters to control – once Zak meets Annie, the player can control her, as well as Melissa and Leslie. Unlike Maniac Mansion, their special skills are barely distinct – Annie travels with Zak on Earth to solve the few scant puzzles that he can’t, while Melissa and Leslie are tasked with mucking around in the Martian pyramids and providing clues for the earthbound folk until Zak can find his way into outer space.

The biggest problem with the structure involves all of the global jetsetting. It’s easy to enough to travel between locations, but airplane tickets aren’t free. Every time you jaunt from destination to destination, you lose a bit of cash, which is in limited supply. But almost all of the games puzzles revolve items that can only be found at some other location, all of which are very easy to miss unless you know specifically what you’re looking for. Right at the beginning, it seems logical that you’re supposed to board the bus once you dig out your bank card, but no – you’re actually supposed to do about a half dozen things first, unless you want to double back later on, wasting both time and money. Once you reach a certain point in the game, you can predict lotto numbers to increase your fortune – which can be done repeatedly, if necessary – but until you reach that point, if you run out of cash, you can potentially screw yourself over if you go broke. There are also a couple of minor no-win situations not regarding money (make sure to remove the pipe from the sink before grinding the bread into bread crumbs) and if any of your characters die (make sure to keep your oxygen tanks full once you’re on Mars), it’ll make the game unwinnable. Furthermore, in all of the releases except for the FM Towns version, you need to input exit visa codes when flying outside the country, as a method of copy protection. As if the whole process weren’t tedious enough. 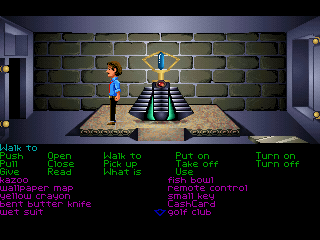 Beyond that massive irritation, Zak McKracken has a troublesome fascination with mazes. There are at least half a dozen of them throughout the course of the game, and while most of them have some kind of trick that allow you to navigate them easily (the jungles can just be traversed by moving forward regardless of your direction, just don’t double back), the ones that don’t quickly grow tiresome.

From a gameplay perspective, Zak McKracken might be the lousiest of any of Lucasarts’ games, although functionally it’s still better than most early Sierra games. What keeps it going is its bizarre premise and sense of humor. Since it runs on the same engine as Maniac Mansion, there’s not much dialogue, seeing as there’s no Talk command, nor is there a Look command to muse about the surroundings. Zak’s personality only shows through when he faces the screen and announces potential headlines for whatever silly situation he’s gotten himself into, but Annie barely does anything, and Melissa and Leslie seem to exist just so the game can include “Yale Co-Eds” on its laundry list of wacky elements found therein. The cover artwork illustrates most of these – the two-headed squirrel, the loaf of french bread, Zak’s goldfish Sushi and his bowl (which, along with some duct tape, a wet suit and an oxygen mask, ends up a homemade spacesuit), a broom alien, and those Groucho Marx glasses. 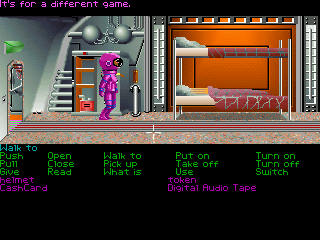 A handful of situational gags produce some laughes, like when Zak is abducted by aliens when flying over the Bermuda Triangle, only to have the pilot react like its a regular (and slightly annoying) occurrence. On Mars, you’ll find a gas can, which your character remark is “for a different game”, referring to the tantalizingly useless chainsaw in Maniac Mansion, which was out of gas. You can inhabit the mind of a yak, and as it turns out, the only thing they can do is Chew and Poop. If you’d like, you can stick Sushi in your sink’s garbage disposer and send him to a horrible death, making for a parallel to Maniac Mansion‘s infamous hamster microwaving incident. Whenever Zak gets kidnapped by the aliens, he’s stuck into the Mindbender, stripped of important items and returned to Earth. For a few moments, the command menu almost completely disappears, slowly returning as Zak comes to his sense – it’s a clever, game-y way to represent Zak’s state of mind, and probably the most interesting thing in the game.

Zak McKracken‘s adventure, as devised by Lucasfilm’s David Fox, was initially meant to be more serious, but the input by Maniac Mansion‘s Ron Gilbert fleshed out the goofier elements, which is really what makes Zak McKrackenas memorable as it is. But Maniac Mansion, despite also being somewhat awkwardly designed, still holds up due its non-linear structure and multiple puzzle solutions, elements which are (with a few exceptions) missing from Zak McKracken. These are definitely some of the the reasons why Lucasarts never fleshed the series out further (that and both Fox and Gilbert left the company a few years thereafter), and so this lone games stands as a not-quite-essential curiosity.

Zak McKracken was originally released on the Commodore 64, and then ported to the IBM PC format. This version has very blocky, low resolution 16-color graphics, and minimal sound. There were plans to develop this for the Apple II, although this was never released. When ported to the Amiga and Atari ST, all of the graphics were redrawn in a higher resolution, although still only 16-colors. This version was later ported back to the IBM PC. Although it’s not quite as a nice looking as Maniac Mansion‘s revamp, it’s still a huge improvement, with more detailed sprites and a substantially less ugly color scheme. 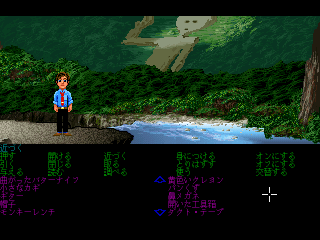 The game was also ported to the Fujitsu FM Towns computer, which was only released in Japan, and was published alongside other Lucasfilms games like Loom and Indiana Jones and the Last Crusade. This version once again has completely redrawn graphics, this time with 256 colors, with a nicer looking interface. Released on CD, it also has redbook audio music, although since a good chunk of the game was silent to begin with, many of the areas only have atmospheric noises. The only real theme of note is the opening theme, which is remarkably catchy. Although this version was not originally released outside of Japan, the CD includes both English and Japanese language modes. Although the game technically runs in 640×480 resolution, only the Japanese interface makes use of the higher resolution, and the rest of the visuals still look like a VGA game. Strangely, when the game is set to Japanese mode, the main character sprites have larger eyes, giving them a more manga-esque look to match the redesigned characters in the cover and manual artwork. It also adds an extra poster for Indiana Jones and the Last Crusade in one of the alien’s quarters. All of these versions are playable in SCUMMVM, and is included in the digital version found on distributors like GOG.

In spite of (or perhaps, because of) the lack of any true sequels, Zak McKracken has developed a small but devoted fanbase over the years. For years, there have been unofficial fanmade sequels purportedly under development. The first, Zak McKracken and the Alien Rockstars, began development in 1996, although it was eventually cancelled in 2008. This version was eventually meant to feature 2D art similar to Maniac Mansion: Day of the Tentacle but more detailed. Another, Zak McKracken and the Lonely Sea Monster, was announced in 2007 and was designed to look like the original C64/PC version, although this version also fell into development hell.

As of this writing, only two of these fan sequels have seen completion. The New Adventures of Zak McKraken, developed by LucasFan games, the same group behind the Maniac Mansion Deluxe remake, using the Adventure Game Studio engine and mostly using graphics ripped from the FM Towns version of the original game, along with several other video games, including The King of Fighters of all places. Although it technically has a new lot, most of it looks and feels recycled, and it’s quite short and insubstantial.

Far more interesting is Zak McKracken Between Time and Space, which features a brand new plot, completely handdrawn modern 2D graphics, CG cutscenes and and full voice acting. The story takes place a bit after the first one, as Zak’s five minutes of fame for saving the Earth has come and gone. He’s left his crappy job and started his own newspaper, and is once again wrapped up in a series of globe spanning adventures. Developed by The Artificial Hair Bros. over the course of seven years, it looks and sounds excellent, easily presentable as one of the best fan efforts right up next to Broken Sword 2.5.

Links:
Zak McKracken Between Time and Space Official website for the fan sequel.
The Zak McKracken Archive Excellent (and quite expansive, for a single game) fan site.
ATMachines Sierra and LucasArts Oddities Tons of screens of the FM Towns version. 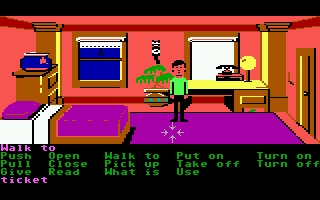 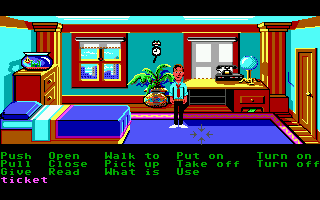 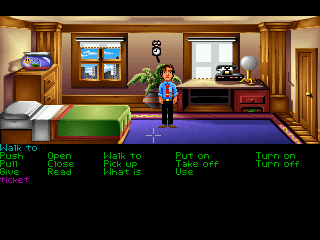