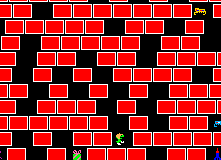 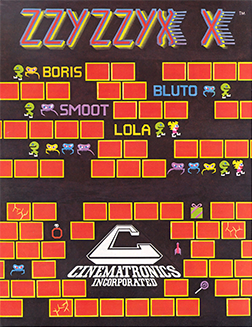 There were so many games being made at the start of the eighties that it was hard to keep track of them. Some were real shining gems like Pac-Man and Donkey Kong, but only so few rose to the top while all other efforts from lesser-known companies fell into the void. Then there were those unfortunate gaming pioneers who made waves back in their heyday but drifted off into the aether as gaming evolved into something with which they couldn’t keep up. Cinematronics is one such company which may not be very well known nowadays, but their vector games of the seventies (like Space Wars and Starhawk) accrued modest fame. Their best-known product is Dragon’s Lair, the very first full-motion video game and the godfather of quick time events. Combined with Advanced Microcomputer Systems, Cinematronics started a short-lived but fascinating laserdisc craze where other companies were getting in on the FMV action. However, the game I’m talking about today has nothing to do with any of this, as it is a mere raster title released just before Cinematronics and ACS innovated a whole new genre. The game in question was called Zzyzzyxx, and its main claim to fame is not any sort of impressive graphical work or particularly memorable gameplay, but the fact that it’s the very last arcade game in all of existence in alphabetical order. That may not be a particularly impressive accolade, but it has to count for something when it rests at the absolute end of an organized list of every game ever. 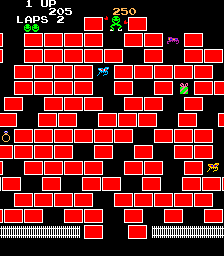 The closest thing to which Zzyzzyxx plays is Konami’s seminal death-avoiding simulator Frogger, except it plays out in reverse. Instead of jumping around in free space and attempting to avoid objects, you’re crammed into limited space and need to move through gaps in objects. Zzyzzyxx appears to be the name of your protagonist, who looks like a green Pac-Man with a smaller head and a pair of legs with sneakers. Our hero’s goal is to meet up with his girlfriend, Lola, by crossing what seems to be an unending sea of red bricks. All horizontal movement is automatic, concurrent to the direction the bricks move in the row you currently stand. You only have control for vertical movement, and even then, you can only move into adjacent gaps within the bricks by holding up or down. Simply getting to Lola isn’t enough, but you also have to pick up a certain amount of gifts for her (presents, lollipops, flowers and so forth) before you’ll be able to reach the other side of the field. The edges of the blocks will turn from yellow to white when you become able to meet Lola, and the number you need increases each round.

Of course, not everything’s peachy-keen in giant-moving-red-blockville, as there are three persistent antagonists pestering our hero. Their names are Boris, Bluto, and Smoot, and they all happen to be evil butterflies, or at least that’s what they LOOK like, though they’re officially called “Rattifers.” If any of them are floating about in an adjacent empty space, they’ll fly right into your own area and end you right there. Thankfully, you do have an unorthodox defense mechanism against invasion by planting a brick right in your own space, allowing Zzyzzyxx to stay phased into his own block and deny every devil from taking his life until he decides to move. However, you WILL have to move at some point, as if you wait too long inside the block, Zzyzzyxx’s air starts to run out indicated by a blue flash. It’s kinda like what happens with Sonic if he stays underwater too long, only without any frightening shifts in music. 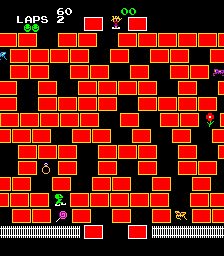 The very simple premise is to just collect gifts and reach Lola while avoiding the Rattifers, but there are a few additional elements which make things more complex. On the upside, you can actually defeat Rattifers by grabbing a helmet and charging into them, thereby butting them into an adjacent block and trapping them forever. A helmet can also be used to break a block and move onward, but you can only use it once for either purpose. You can also bulldoze Rattifers after meeting Lola, causing all bricks to change color and Zzyzzyxx to turn an invincible blue, which is ironically the same color he turns when he’s losing air inside a block. He enters this Pac-Man power state for ten seconds and the Rattifers actively try to avoid him in this state. However, the Rattifers fight back in later levels; you complete the stage after a certain amount of “laps” accomplished by meeting Lola. Later stages require you to perform more laps and deal with the Rattifers dropping bombs on you, which move through the cracks and keep dropping until they either hit you or the bottom. There are also missiles which do the same but start at the bottom and move to the top, and there are also faulty blocks with cracks under them which will collapse on you if you’re right under. For a game that only allows you to move up and down at certain intervals, things get surprisingly tricky the farther you go.

Zzyzzyxx is certainly not a bad game, and it’s fairly entertaining for its place on the fringe of gaming’s golden era. It may not be anything fancy like Cinematronics’ Dragon’s Lair and Space Ace, and it’s not as mechanically innovative as its contemporaries like Q-Bert or Dig Dug, but it’s a fairly cute game that held the standard of coin-op quality of the time. Still, let’s face it: The only reason anyone’s going to remember Zzyzzyxx is for its stupidly outlandish name. It’s never prudent to judge a book by its cover, but when the spine reads the last known game in the entire alphabetical history of virtual entertainment, it’s difficult to forget its place as the extreme right book end. Zzyzzyxx received no known home ports, but it was re-released for arcades in 1983 with a far more sensible title, “Brix.” Brix changes the blocks from red to blue and only has Lola appear when you collect the required amount of gifts, but it is otherwise the same game. It is certainly better descriptive, but it doesn’t have as much charm as the original title; however, the blue bricks are admittedly less searing on the eyes than bright red, so this version may be preferable for those with sensitive retinas.