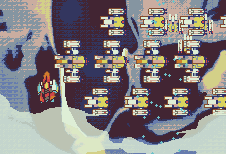 The indie scene has been a hotbed of shoot-em-ups for a good long while, but they’ve become essential to the scene ever since Cave gave up arcade shooter development after 2013’s Dodonpachi Saidaioujou. Stellar Circle’s Blue Revolver is one such effort that’s directly inspired this particular style of manic shoot-em-ups, and manages to sit comfortably next to Crimzon Clover as one of the best of its type. 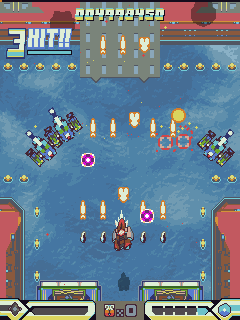 The story is gloriously silly nonsense, about people who can manipulate the code of the universe, which has the unfortunate side effect of creating “junk” that the game’s heroines have to destroy. This aside, the fundamentals of the game will immediately be familiar to anyone who’s played a Cave shooter (primarily, Ketsui or any of the Dodonpachi line). There are two ships you can control, piloted by Mae or Val, who can select from an arsenal of four different special weapons. Each has two “offense”, one “defense”, and an unusual “finesse”, making for a total of eight between them. Both of them have similar Dodonpachi-style mega lasers, but the more interesting weapons include drills and homing lightning blasts. You can also choose among three different Option configurations. 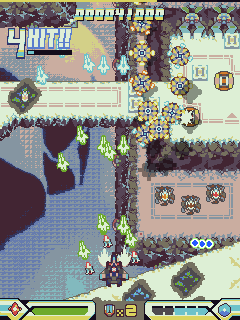 The focus of Blue Revolver is on raking up short combos, maxing out at 8 hits. At any point, you can activate your special weapon, which will destroy enemies and apply a score multiplier based on your combo for a brief period of time. This is all pretty standard, but the main difference between this and any number of similar games is that your special weapon has limited ammunition. At full power, you can probably go for two or three rounds of using your special weapon before it’s entirely depleted. Bosses and other large enemies also offer “Break” bonuses, usually obtained by destroying certain parts of it. 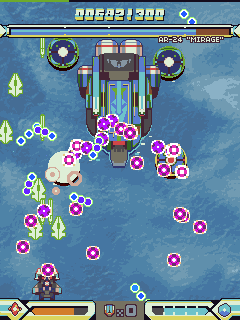 You can restore your ammo by grabbing certain energy capsules, which are dropped by ground-based enemies and by anything you destroy with a bomb, and there are a few items that will replenish it as well. However, if you don’t have any bombs it’s very slow to fully restore your ammo. Your main weapon is fairly weak against many foes, and you end up feeling extremely vulnerable with out. As a result, it feels like an extreme punishment for overdoing it. Furthermore, one of the main appeal of these types of games is the rush you get from making the screen explode in score items. Forcing yourself to ration your energy makes Blue Revolver feel weirdly restrained, but at the same time adds an extra layer of strategy. 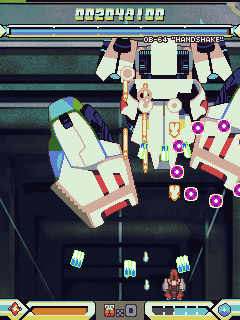 It does make sense that the special weapon ammo is limited, though, because they are just far too powerful to let you use with abandon, especially since they can quickly dismantle bosses. Since there’s also such a wide variety of them, it encourages experimentation to find the ones that not only fit your playing style, but are the most advantageous to gaining points. Certain ones make the game easier, but aren’t as great for scoring. Still, it would’ve been nice if the game didn’t stick so closely to the bullet-hell formula and let you switch weapons via power-ups, rather than picking one at the outset, so you could really have greater freedom to mess around with them. 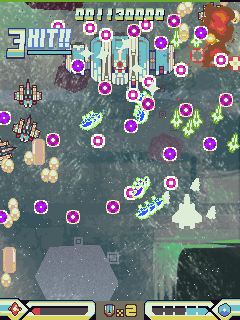 The game is also very player friendly, though that’s not to say that it’s easy. The “Normal” mode is an equivalent to an easy mode, which auto-bombs when you get hit and sets the enemy patterns on the lowest setting. The standard “Hyper” mode heavily fluctuates in difficulty depending on your performance, and the “Parallel” keeps things at the hardest setting regardless of whether you can handle it or not. You can also hop into any section of any level for practice, and there are numerous missions give you specific goals for a specific stage. Gaining points will also grant you stars, which are used for assorted unlocks. Most of these are wallpapers or music remixes, you can also unlock free play. Wisely, this is one of the most expensive items, giving you an incentive to learn the mechanics before you can breeze through to the end. By the time you unlock it, you’ll probably be proficient enough to get a good chunk through the game on a single credit anyway. There are also tons of different things you can customize, including the ability to change bullet colors, darken the background, add suicide bullets, and others. 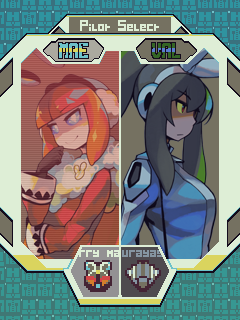 Visually, Blue Revolver opts for a lower resolution (240×320), giving it the look of a late 90s arcade shooter. That said, it still has a distinctive color palette that sets it apart from the Raizing or Toaplan shooters from the era. The first level takes place over a mountain range, with a background that intentionally mimics the glitchy tiles of 8-bit games, though this style isn’t uniform throughout the rest of the game. The artwork is provided by woofy, whose super-cute-but-stylized characters give the game a particular style without being alienating like some of Cave’s later games. Similar to Cave games, a post-release Black Label update adds and fixes up some stuff, including rebalanced and added modes, tweaked missions, remixed music, even more stuff to unlock, and more. 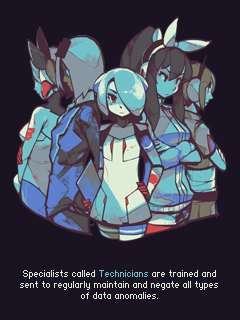 The plotline (as much as pre-boss dialogue can be termed as such) also varies based on which character you choose. The music, by qygen and novaturtle, also compares favorably from the works of Manabu Namiki on the Dodonpachi and Mushihime-sama games, with the boss fight theme being the particular standout. The only things really missing (as of press time) are lack of replay sharing and internet leaderboards. The former is understandable, but the latter is an unfortunate omission given how important scoring is to these types of shoot-em-ups. 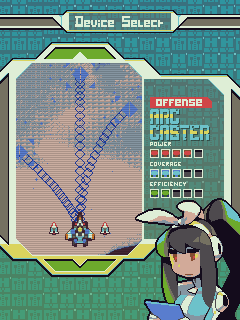 Blue Revolver is challenging, but it gives enough to novices to help get them to the level where they can really enjoy the game, and highlights the best of these types of games while omitting its more off-putting elements. While it takes a little bit of time to acclimate to, it’s so skillfully designed that it easily stands up next to the works of the heavy hitters of the shoot-em-up scene. 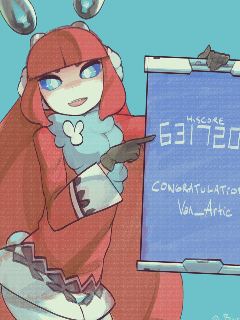