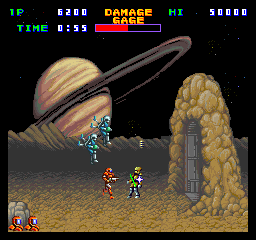 Technos was primarily known for beat-em-ups like Renegade and Double Dragon, or assorted wrestling games. Their second game, before they developed this reputation, was Xain’d Sleena, a sci-fi themed run-and-gun. Pronounced “zayned sleena”, it means “soldier of light” within the game’s fictional language, though none of this is actually shown in the game itself, as it just calls the main character Xain.

When the game begins, you pilot your spaceship around one of five planets, effectively being a level select. There’s a brief cinema of the ship rocketing towards the planet and then dropping you on the ground, where Xain pops out in his space suit and begins to wage war. Xain’d Sleena‘s is a run-and-gun, and its closest equivalent is something like Contra, though this actually predates Konami’s classic by about a year. You can’t aim upwards or downwards, but this restriction is mitigated by the fact that you can double jump, which is something of a rarity in these types of games and was even pretty novel back in 1986. There are plenty of airborne enemies that this double jump will help you reach, though some particularly high flying foes can still elude you. 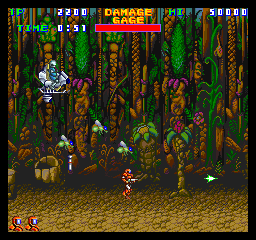 There are several additional weapons, though the equipment system is a little odd. Certain enemies drop P capsules, which will randomly grant you one of several weapons. Some of these seem inspired by Gradius, like the grenades, which are tossed at an arc in tandem with your regular laser, or the double shot, which fires bullets at both 45 and 90 degree angles. The others are an assortment of lasers, one of which is slower but has greater strength, and the other fires three beams at once.

Also rather unusual for this type of game is the presence of a life meter. Bullets actually don’t do all that much damage, although since there’s no invincibility period, you can find yourself losing a lot of energy very quickly. But actually running into enemies causes a lot more damage, and close encounters with many foes will kill you outright. There are plenty of bad guys that leap around with lightsaber-type weapons, or heavily armored foes that take several hits to take down. If you die, you respawn at a checkpoint. 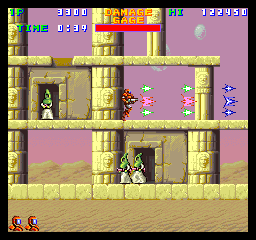 Of the five initial stages, there’s a rock planet, a jungle, an underwater level, a desert, and a volcano. The jungle and desert are the most interesting of these since they have unique midboss battles, the former against a giant dinosaur, the latter where you fight a mysterious mask that emerges from a series of ruins. The regular bosses are just larger enemies that emerge from the base at the end of each stage – their patterns are actually pretty simple, but the single hit collision kills combined with the routine attacks from smaller enemies make these pretty challenging.

Once you’ve beaten one of these bosses, you attach a bomb to the enemy base and summon your spaceship. You have ten seconds to hop into your cockpit and escape, though this is trivial, to the point where if you get yourself killed here, you probably weren’t paying attention. But the level doesn’t end here – before the base is demolished, it sends out several smaller enemy fighters to try to take you down as you leave the planet. The game then switches to a brief side-scrolling shooter escape segment that lasts about a minute. This certainly feels exciting the first time it happens, and these type of multi-genre interludes are cool in a “you got a shoot-em-up in my run-and-gun!” kind of way. But in practice, most of the these sections are pretty similar to each other, to the point where they feel redundant as you progress through the stages. You can only take a single hit and you only have the basic weapon, while enemies just fly out in assorted patterns. Halfway through the game, though, there’s a boss encounter with a mothership, and one stage changes up things a bit by making you maneuver though a minefield. 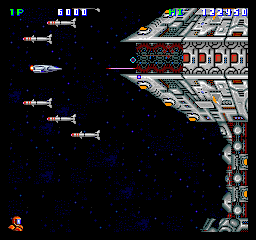 Once you’ve beaten all five of the planets, you’re ready to take on the empire’s primary base, which totally looks like the Death Star. This section tosses almost everything at you at once, including some previously defeated bosses. Once you reach the center, you plant an explosive on its core…at which point you have 60 seconds to escape or go down in flames along with it. Dying resets the clock though, so you don’t really have to stress yourself out too much.

Xain’d Sleena has almost all of the makings of a classic. It’s certainly very typical of many later run-and-guns, but it  has mechanics like the life bar, the double jump, and the shoot-em-up escape sequences that help set it apart. The only thing it really lacks if a two-player mode. The sprites are a little on the small side, but the backgrounds are generally all high quality, and the indigenous life on the planets, like the giant insects in the jungle or the sandworms in the desert, allow for some variety beyond the brigades of imperial soldiers. It is extremely difficult, though that’s par for the course for an 80s arcade game. It only really suffers due to the extraordinary amounts of slowdown, a constant theme with many Technos games. 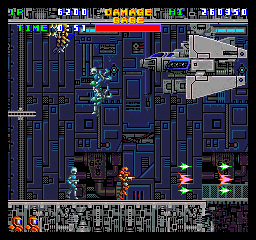 The game received an alternate release for America, where it was distributed by Memetron and give the more pronounceable but less exotic title Solar-Warrior. This version removes the name of the hero in the opening text, plus is also takes away the ability to select your stages. The original release had unique names for the planets like “Cleemalt Soa” and “Kworal Soa”, while this version just changes them to planets of our solar system. This doesn’t entirely make sense, since Jupiter is a gas giant and so therefore you can’t actually land on it. (It seems the Saturn stage might be taking place on one of its moons since you can see a planet with rings in the background.) This version also fixes the typo by the lifebar, changing “gage” to “gauge”.

While never receiving a console port, the game was released on several European home computers, now retitled Soldier of Light. The ZX Spectrum and MSX versions run sluggishly and are displayed in monochrome, while the Amstrad CPC version is more colorful but runs so slowly to the point of being unplayable. The Commodore 64 version runs at a decent speed, though it’s displayed in a window about half the size of the screen, and has some decent new music courtesy of Maniacs of Noise. The Amiga and Atari ST versions are similarly squashed but look decent, with the Amiga version having better sound, but all three of these versions suffer from sloppy level construction, where you just get overwhelmed with enemies, making it even more difficult than it was originally.

In all of the computer ports, you can pick your levels, and they’ve given all new names different from either the arcade games or the real-life ones…but the commonality between these versions is that there’s only three stages. Yes, it’s just half the length of the arcade game, and then it just ends. None of these versions are even close to ideal, and the original arcade game has never released elsewhere, so it’s pretty unfortunate.

Battle of the Ports 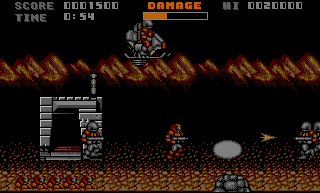 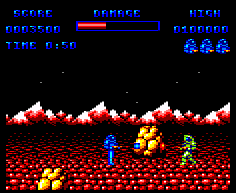 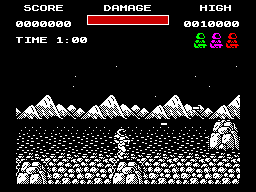