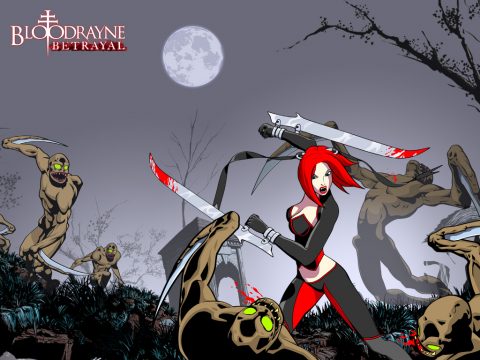 After whoring out the franchise to Boll three times, Majesco finally found a developer to create a new BloodRayne game. With the first announcement for Nintendo’s 3DS, a mysterious title called BloodRayne: The Shroud was listed among the sytem’s lineup, but it has disappeared since. Instead, the 2D experts at Wayforward tried themselves at a new interpretation for XBLA and PSN. Instead of picking up on any previous installment, Betrayal is a complete reboot with a significantly different, manga-like tone. Many have likened the game to classic Castlevania, and it is true that it shares many aesthetic elements (the Gothic architecture, the style of the music), but in gameplay it couldn’t differ much more while still being a sidescrolling action game. 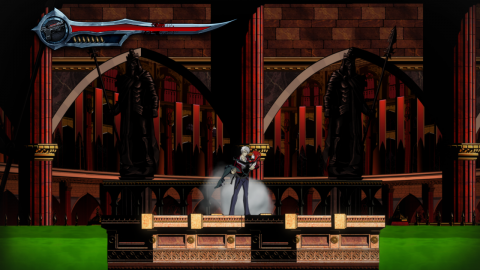 Is this BloodRayne, or Twilight?

The platforming is simply beautiful. Ever since smooth controls have become the standard over Mario’s wonky high-inertia physics or Castlevania’s stiff mechanics, platformers have struggled to keep the challenge up without resorting to cheap tricks and deceptive trope subversions. Almost all of Betrayal‘s higher level platforming sequences rely on the more abstract mechanics: Either Rayne has to dash in mid-jump, slash to keep herself suspended in the air, or get off the ground with her super-high backflip (done by running a few steps and then turning around just before the jump). In best Super Mario Bros. tradition, enemies serve as stepping stones, thanks to a bouncing footstomp move. To get to all the secret areas (mostly to collect hidden red skulls, which substitute for experience points), often all of the above has to be applied subsequently. Environmental hazards like moving chainsaws and laser barriers put extra pressure on the player. There are also dozens of lovely homages to the classics, like the rotating cannons of Super Mario Bros. 3. Unfortunately Rayne can’t duck, which not only feels unnatural, but also makes her an easy target, while fighting small enemies becomes a major pain.

Unfortunately, platforming is only half the game, as Rayne spends at least the same amount of time fighting monsters in a boring Devil May Cry-styled combofest. All too often battles take place in super lazy locked single-screen arenas. The game frequently gets ultra-chaotic with several different enemy types on screen at the same time, and that’s were combat draws all its difficulty from. Rayne carries a gun for crowd control, but ammunition is very limited. The system shows much potential when combined with the platforming, but the drawn-out arena fights are just unecessary padding. After each stage, Rayne gets a ranking for her performance. After a normal playthrough, it’s almost invariably “F”, so in theory there’s much potential for score runs. Unfortunately, the only way to really improve on the ranking in a meaningful way is to solve the arena fights more quickly. Given that they’re the part one would prefer to skip in the first place, there’s not much motivation to go back. 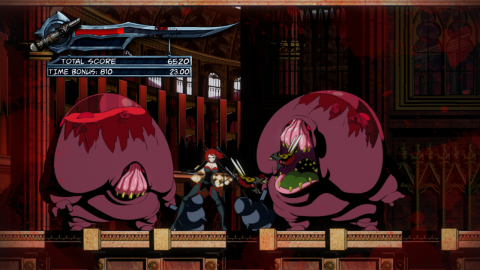 At least sometimes clever use is made of Rayne’s ability to use environmental hazards to her advantage, in a more varied manner than it was the case in Bloodrayne 2. (It even has portions were Rayne uses slain enemies as platforms to cross bodies of water/acid, which was planned for Terminal Reality’s last game in the franchise but ended up being cut.) Wayforward hasn’t been very creative with the bosses, though. During the first 10 stages, there are merely three boss fights, and two of them are against variants of the same monster.

Loyalty to the original games is sporadic at best. Many monsters are clearly inspired by the TRI horror universe, but the drawing style makes them all look much too cute and not nearly as disgusting and horrifying as was probably intended. The coffin rocket Rayne uses to get from level to level might have found its place in a kitschy anime like Hellsing or in Gungrave, but here it just comes off as silly. The worst part is the dialogue, though, which is truly abysmal. BloodRayne never was high drama, but it very well captured that certain B-movie charme with its mix of trashy one-liners and awkward pathos. Here, however, it’s embarrassing fanfic at its worst. There’s even a shitty emo vampire who helps out Rayne by turning into a white raven (Rayne later learns to turn into a bird herself). The game could have been significantly improved just by cutting out all the dialogue (and the crappy emo vampire) – it’s that cringe-worthy. At least the dialogs are few and far between.

Regardless, BloodRayne: Betrayal still is a really good action platformer. For fans of Devil May Cry, the combat might even be rewarding as well, while everyone else is annoyed by the arena brawls balancing out the more well-integrated fights for the worse. Whoever liked the original games’ flair will get a toothache from all the bullshit anime tropes, but at least it’s easy to ignore most of them.