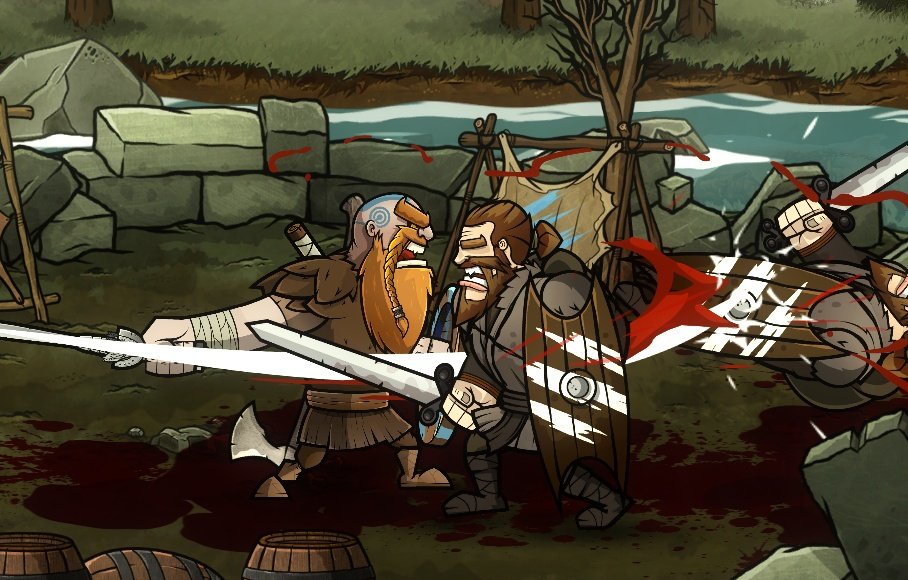 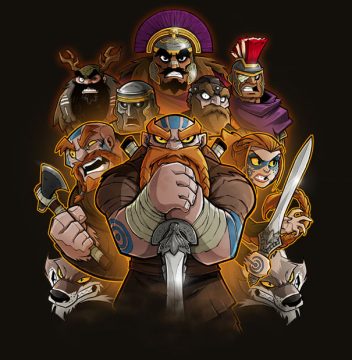 About two thousand years ago, the Roman empire made some attempts to conquer the island of Great Britain. Wulverblade, an indie beat-em-up for Windows and various consoles, takes place during one of these campaigns, as you take control of one of three British warriors to tend off their homeland from invaders. From the outset, the menus look and feel more like a Total War-type war game than an action game, though once you get into the thick of it, it’s arcade roots quickly become apparent.

You can choose from one of three characters – Caradoc, Brennus, and Guinevere – and as with the usual trio of beat-em-up tropes, they each fall into the speed, power, or balance type of characters. Other than these stats, each has a few unique movies, like Guinevere’s mid-air dash attack. There’s only a single attack button (unless you have a secondary weapon in hand), so there’s not much in the way of combo moves. All three have identical health-draining crowd control moves, as well as a “one per level” ability to call on a horde of wolves, damaging all of the enemies on the screen, much like the magic attacks from Golden Axe. 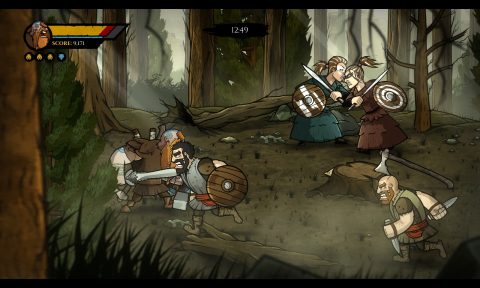 Instead, Wulverblade greatly bolsters the emphasis on defense. Though all of the characters can run, they’re also bulky and a bit slow. To counteract this, there’s a block button, along with a defense roll to quickly move away. Many enemies have powerful attacks, during which they can’t be stunned, so the easiest way is simply to block or duck out of the way – and if you get the timing right, you might be able to parry and get in some quick counterattacks. However, you can’t cancel out of your own attacks to dodge; since the timing window for these attacks is fairly short (they’re shown by an exclamation over the enemies’ heads), you need to be careful about button mashing if you want to defense in time. Stepping up your defense is also extremely important in the back half of the game, especially when it starts introducing the shield-wielding soldiers.

As you hack up enemies, you’ll also increase a power gauge, which when maxed out, will get you into a rage mode. Not only does this increase your speed and make you temporarily invulnerable, but it also heals a good chunk of your health, essential for when the game gets stingy with health restoratives. This meter charges fairly quickly, so you can use it fairly often to keep your health up, as long as you aren’t getting brutalized too much. 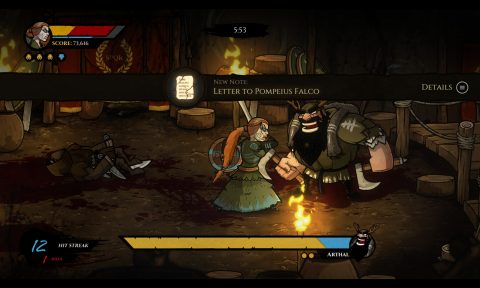 Each of the characters has their own unique weapons, but there are a variety of subweapons too, most of which have different functionalities. Most are simply swords, knives, or severed body parts, dropped by defeated soldiers, which you quickly chuck across the screen for some minor damage. A few others, like the spears, replace your main weapon until their expire. A third type are heavy weapons, which accompany your main weapons and are utilized with a second button. Here, you can actually switch between attacks to form simple combos, since the heavy weapons are more powerful but obviously slower. You can really tear up enemies when dual wielding enemies like this, so it’s unfortunate that heavy weapons are relatively uncommon over the course of the game. (But then again, it may have made the game too easy.)

Indeed, Wulverblade is fairly difficult. An easy mode and added checkpoints in a post-release patch helped ameliorate this, but you really need to keep up your defense and use the power-up/health systems to the best possible effect. There are eight levels altogether, and it’s a fairly long title played all the way through – about two hours for a single run, particularly if you’re watching cutscenes. It’s a bit long for one sitting, though it saves after every level. An arcade mode only gives you three lives and three continues to make it all the way through, though.

Rather than going the retro pixel route like Fight n’ Rage or Scott Pilgrim, Wulverblade goes for a more modern approach, using higher resolution drawings over a skeletal animation system. The style is similar to Klei titles like Mark of the Ninja and Shank, in that they’re cartoonish but also extremely violent – in the game’s many cutscenes, most of the trios are soaked in the blood of the enemies. It also serves as a contrast to Castle Crashers, which uses a similar Flash-style animation, but its gore is comical, compares to the brutishness presented here. 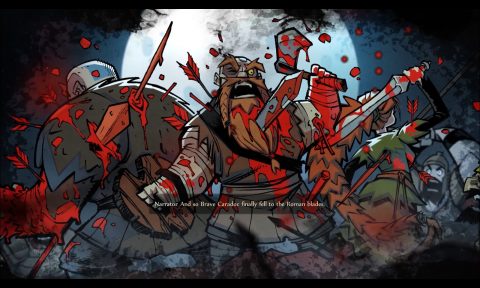 A ton of attention was spent pouring historical details into the setting, much of which presents itself as collectibles, unlocking details and pictures of the research trip undertaken by the developers. The depth of the setting paints a far great picture than most action games, let alone many classic beat-em-ups, which were generally happy to just source whatever movies or artists were popular the time (The Warriors, Conan the Barbarian, etc.) There is a hidden item called the Golden Axe, though, in reference to Sega’s classics. (The achievement/trophy is called “The Adder of Death”, if it wasn’t clear enough.)

The downside to maintaining a historical setting comes out in the sameness of the backgrounds and enemies; most of the landscapes take place on the dreary British countryside, with an occasional encampment or cave to switch things up. Similarly, while there’s a variety of enemy types, and even many variations in those (beyond mere palette swaps), most of the enemy types are similar, so no skeletons or dragons or weird creatures like you’d find in Golden Axe. Similarly, the music is period appropriate, but most of it blends into the background behind the sword slashing and death cries. That said, it’s not like there are many other games that take place in 120 AD during the Roman invasion of Britain, so it’s still unique in that respect. Plus it does get creative with a few fights, particularly a boss battles where you just need to demolish a brick guard tower with just your weapons. Plus the game veers slightly into the fantastical with a twist in the game’s final level, enough to give it variation without completely rewriting its rules. 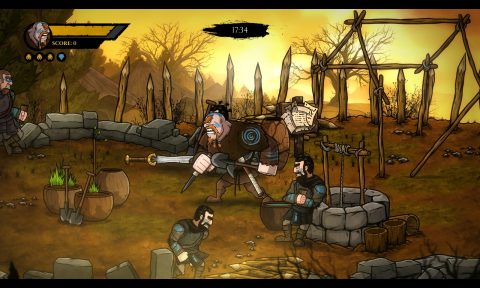 Wulverblade was initially released on the Switch before being ported to other platforms. They’re all basically identical, though the Switch version is capped out at 30 FPS, due to the large, detailed characters, while the others are unlocked.

Although the developers have noted that they paid great attention to the feel of classic arcade beat-em-ups, the look, style, and abilities come together to create a game that doesn’t quite feel like one. That’s not really a downside though, because the emphasis on defense creates a mechanic that places a higher emphasis on skill, especially considering a good number of the arcade games were balanced more towards quarter munching. The result is an enjoyably modern take on the beat-em-up, one that takes notes of genre’s evolution while relishing in the simple joys of hacking things to bits.