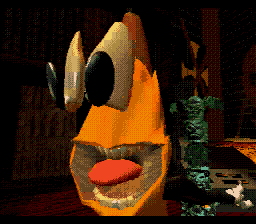 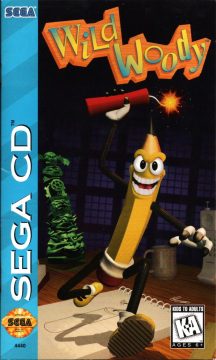 Generally speaking, it’s easy enough to find the appeal in something even if it’s not for you, but it’s hard to say who Wild Woody was supposed to be for. It’s a 2D platformer, a genre often associated with family friendly mascots, but it’s crammed with sexual innuendoes that are inappropriate for children. Anyone who decided to try the game would have likely been deterred by its imprecise controls, confusing level design, and lack of innovations that put it far below its contemporaries on the Sega CD.

Everything about Wild Woody is laced with an air of tragic defeatism. The game was shoved out in 1995 as one of the last titles on the dying Sega CD and Sega’s Multimedia Studio team (whose only prior title was the Sega CD version of Jurassic Park) was already in the process of being disbanded. The title was only released in North America and Brazil, so it wasn’t given a chance to make a splash worldwide. According to Doug Lanford, a programmer on the game, the team knew that the game was destined for the bargain bins before long. The inevitability of the game’s failure even made it into the game itself – during the ending, Woody cracks a joke about there being no chance for a sequel unless the game sells a “zillion” copies. 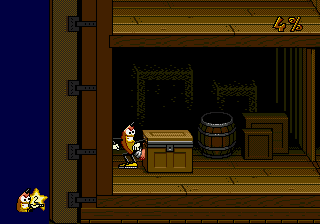 The story begins with an adventurer named Dusty bringing home a miniature totem pole. It doesn’t take long for the totem pole to become sentient and split into multiple parts, all of which (except one called Low Man) escape into magically created worlds via the paintings in Dusty’s office. This process also destroys space and time as we know it, leaving the office drifting in an empty void. Dismayed by what has happened, Low Man uses his magic to bring a nearby pencil to life, thus creating the titular Woody who now has to gather up the parts of the totem pole to bring things back to normal.

There’s a bit more story here than the average platformer, with there being a FMV in between each world. The plot isn’t exactly riveting though, and most FMVs just involve Woody cracking a joke or two before moving onto the next world. They also look incredibly rough and grainy, even by Sega CD standards, which does admittedly add to the surreal weirdness of the game. The movements of Woody in these FMVs were done via motion capture by Donald Hom, who would go on to do motion capture in games like Syphon Filter and Command & Conquer: Generals. Thanks to an endearing performance by Joe Kerska, Woody’s goofiness and wild, shrill voice are front and center at all times, very much reminiscent of Jim Carrey’s character in The Mask. 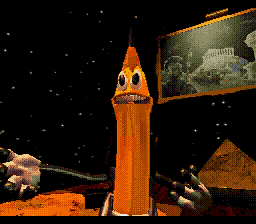 Wild Woody takes a lot of notes from other western-made platformers such as Earthworm Jim, Gex, and the Genesis version of Aladdin in its approach. Levels are gigantic, incoherent labyrinths that require you to go in all directions to get to the end of the stage. Like the games it resembles, lush visuals were most certainly a priority here, as hand drawn frames are employed regularly for a wide variety of detailed animation. Woody has different expressions for any action he takes, whether he’s jumping, erasing his foes, on the edge of a platform, or even when he’s standing still. This also applies to the enemies you’ll face, and the game’s bosses are massive sprites that look particularly great, though they do feature less animation than everything else.

Your primary means of attack involves using Woody’s eraser (unfortunately located at his rear end) to erase any foe you jump on top of. This method is far more troublesome than it should be, with the shoddy hit detection oftentimes causing you to take damage and Woody’s bizarre aerial acceleration making it hard to land where you want. Woody can also use his eraser to create holes in certain floors and walls as well as open boxes that can contain items or teleporters. There’s no way to tell if something can be erased until you try it, so experimentation is needed in order to find shortcuts or one of many puzzle pieces. Collecting every puzzle piece in a stage brings you to a bonus level, which is a great opportunity to get some extra lives. Due to your unreliable means of attack and your health being easy to dwindle down, the best strategy is to avoid enemies and focus on running towards the exit, which detracts from the level designs and items that are supposed to encourage exploration.

Something that makes Wild Woody stand out from other platformers is the ability to sketch various things to assist you during levels. By collecting sketchbooks scattered around, you can select from a menu of sketches unique to each world. Most sketches simply damage nearby enemies, but sketches like the paper airplane or the jetpack can make navigation much easier. There’s a nice assortment of sketches, including options like a busty mermaid (that can appear topless if you activate an esoteric Easter egg), dynamite, a futuristic tank, and a giant hand, so there’s some fun to be had in trying them all out to see the unique animations for each one. 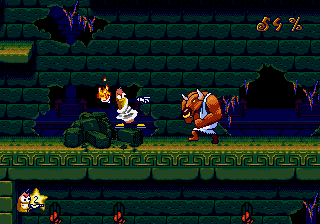 Once you use a sketch, Woody will shrink in size, which has its benefits and drawbacks. Being small makes you harder to hit and there are also corridors that only a small Woody can fit into. However, being small makes it harder to grab items if they’re too high up, and once Woody hits his minimum size after two sketches, he can no longer sketch anything until he grabs a power-up that’ll bring him back to normal size- complete with a gratuitously suggestive animation. Having to juggle your sketch ability with your size is an interesting dynamic to be sure, but it ends up being vastly underutilized, with only a few levels towards the end having moments where being small is required.

The game is divided into five worlds with two stages and a boss fight per world. The first world is a pirate themed level that takes place on a pirate ship and leads into a treasure filled cave. The second world is themed around Greek mythology, in which you’ll have to deal with minotaurs, Medusa, and a boss fight against the head of a massive Zeus statue. A somewhat bland mechanical world comes next, but it does end with a strange boss fight against an alien-like creature wielding a Sega Genesis controller. Most frustrating of all is the sci-fi world, in which you have to navigate between parts of a massive space station by controlling Woody as he drifts through space. Finally, the cemetery world pits you against monsters, demons, and zombies that appear to be based on Elvis Presley. It may sound like Wild Woody is bursting with variety, but the creative world ideas are really just backdrops, as very few levels feature gimmicks or changes in the formula of any kind. Repetition is a problem that permeates both the levels and all bosses except the final one – it’s an utterly strange fight against a ghostly monkey where you have to lure it to the center of the level so that it flushes a toilet enough times, making for a fittingly bizarre climax to a bizarre game.

In an unexpected twist, the music of Wild Woody was composed by Ron “Bumblefoot” Thal, who would go on to become one of the lead guitarists of Guns N’ Roses several years later. Despite being given a tight deadline to complete the soundtrack, Ron Thal brings an eclectic arrangement of music, with liberal use of the guitar that ramps up in intensity as the game goes on. A couple of levels incorporate vocals, which are hard to make out during gameplay but are an amusing surprise when they come up. Not every track is a winner though, such as the song in the very first level that’s just a grating track that loops every 10 seconds or so. The soundtrack tends to feel repetitive due to its reliance on guitar riffs, but it’s a solid effort overall and is one of the game’s stronger points. 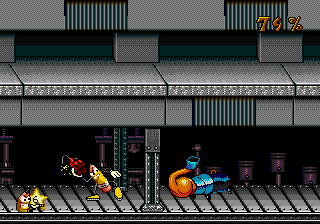 As expected, Wild Woody has wallowed in obscurity since its release, only surfacing as an occasional target for memes or the jokes of popular Youtubers. While it’s far too tedious and sloppily designed to recommend playing, anyone who enjoys the cheesiness associated with 90s FMVs owes it to themselves to look up the ones in this game, because they really do have to be seen to be believed. Despite the negative reception and Sega’s complete abandonment of the game, Joe Kerska still seems to have some fondness for his part in Wild Woody, as he’s currently active on Twitter using the handle of ”wildwoody4real”.

http://www.opusgames.com/games/pencil/pencil.html – Doug Lanford’s website with his reflection on the game