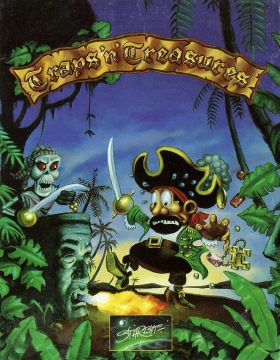 Before being released in July 1993, Traps ‘n’ Treasures had a difficult development phase. It was created primarily by Roman Werner, who at the time only had experience in composing music for other video games. After impressing them with a demo, he signed a contract with the German company Starbyte Software to complete the game for them in eight months. Werner realized he had bitten off more than he could chew and had to spend much of his future paycheck outsourcing his workload. To make matters worse, Starbyte declared bankruptcy soon after the game’s release and was taken over by another company, suspiciously also called Starbyte, which gave them no obligation to pay what they owed. Werner was able to eke some cash out of them in the end, but it was still not a very happy ending after three years of effort. 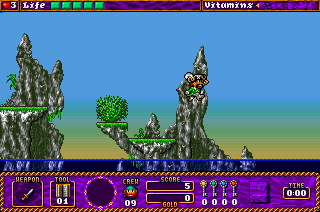 So after such a tumultuous development cycle, what exactly came out the other end? Well Traps ‘n’ Treasures is an action-adventure platformer, apparently inspired by one of Werner’s favorites in the genre, Son Son II for PC Engine. However other than a few visual parallels, particularly in power-up design, Traps ‘n’ Treasures is a very different beast altogether.

The story goes that Captain Jeremy Flynn and his crew have gotten lost on their latest voyage. They blunder into the area of the Devil’s Island, home of the villainous Redbeard and his band of pirates. Flynn’s treasure is plundered and his crew is captured. He manages to avoid facing the same fate and heads for Devil’s Island to personally rescue his shipmates and recover the treasure.

With only four levels the game seems quite short, but it still takes a good few hours to finish. The first stage “Threadneedle-Lagoon” is relatively straight-forward, with a bit of exploration required when you dive into the water in search of ladders and keys. Later levels become much more non-linear with plenty of locked doors, branching paths and secret treasure. The sudden heavy focus on finding colored keys, solving switch puzzles and backtracking feels like a serious departure from what was established in the first level. Not to mention the sheer quantity of hidden spikes, falling stalactites and pitfalls that start cropping up, creating a significant difficulty spike. 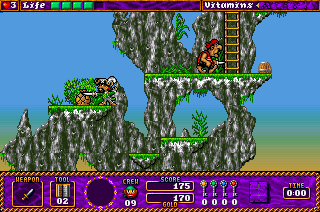 The controls are the Amiga platform game standard: pressing the fire button makes Flynn attack and pressing up makes him jump. Although you can attack while standing and crouching, you can’t in mid-air. Instead, pressing the fire button in mid-air makes Flynn tuck in his legs and bounce on his heels to destroy brittle blocks underfoot. The pirate flag can be used as a parachute by pressing down and then up in midair, saving you from fatally high falls but cutting your horizontal movement significantly.

Each level has the same objective: find all of Flynn’s captured crew and then head for the exit using a compass. There’s plenty of treasure to pilfer along the way, and you’ll be needing it to buy assorted helpful junk from the numerous shops. Grabbing pieces of fruit will fill up your “vitamins” bar in the top right of the screen, refilling a point of your life when it’s maxed, while picking up a skull will completely deplete it. Blue potions refill larger portions of your life, but they tend to be quite rare. Collecting six treasure map pieces takes you to a bonus round where you can get some bonus cash and extra lives. There is a second type of bonus level where you collect treasure that rains from the sky. You can access them by picking up stars that fly out of invisible blocks, found only by jumping underneath them Mario-style. They’re so well hidden that it’s entirely possible you’ll go through the whole game without encountering one. 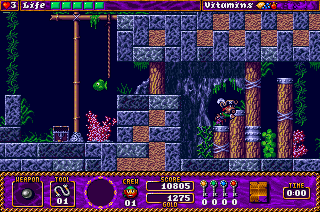 The shops are staffed by some wonderfully grotesque merchants who all tend to carry different stock. On top of the typical health restoratives, there are also medkits which increase your maximum HP, bombs for destroying brittle walls, maps that give you a wider view of your surroundings and magnifying glasses that let you make sure switches and the like aren’t secretly traps. They stock a number of different weapons as well, with the morning star and cannon balls being your best choices. Avoid the fireball weapon like the plague: it works like an even more obtuse version of the torch weapon in the Ghosts ‘n Goblins games, flying in too high an arc to reliably hit anything.

As ambitious as it is for such a small game, Traps ‘n’ Treasures may frustrate a lot of players around the halfway point. The level designs get very big and confusing, with several dead ends where self-destruction is the only way out. Fans of keeping a pen and paper handy to make physical notes may not have as much of a problem. More casual players will not be as thrilled. The controls can be very fiddly too, especially when it comes to climbing up and jumping off of ropes. More aggravating still is the way the camera follows Flynn in such a way that it leaves you unable to see much of what is in front of you, which is usually a fiendishly placed spike trap.

What Werner had to pay when he outsourced the graphics was money well spent. The sprite work on Flynn and the assorted baddies does its job well, but it’s the background artwork that really steals the show. The underwater segments in the first stage are especially notable for their detail. Music is scarce other than what is played on the title screen and map screen, leaving most of the levels with only ambient noise. The most memorable piece of music is the ominous and somewhat melancholy track that plays whenever Flynn dives underwater. 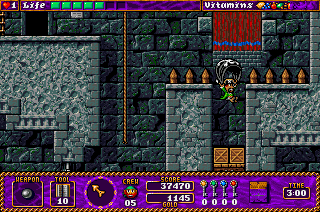 Trap ‘n’ Treasures is a game you need to have the right attitude to really get into. There is a definite sense of accomplishment as you unlock one door after another and everything begins to fall into place, but the controls and puzzles will cause much irritation in those who don’t have a good deal of patience. Should you try to rush ahead without paying attention, it won’t pull any punches. If that sounds appealing to you, then Traps ‘n’ Treasures is highly recommended.