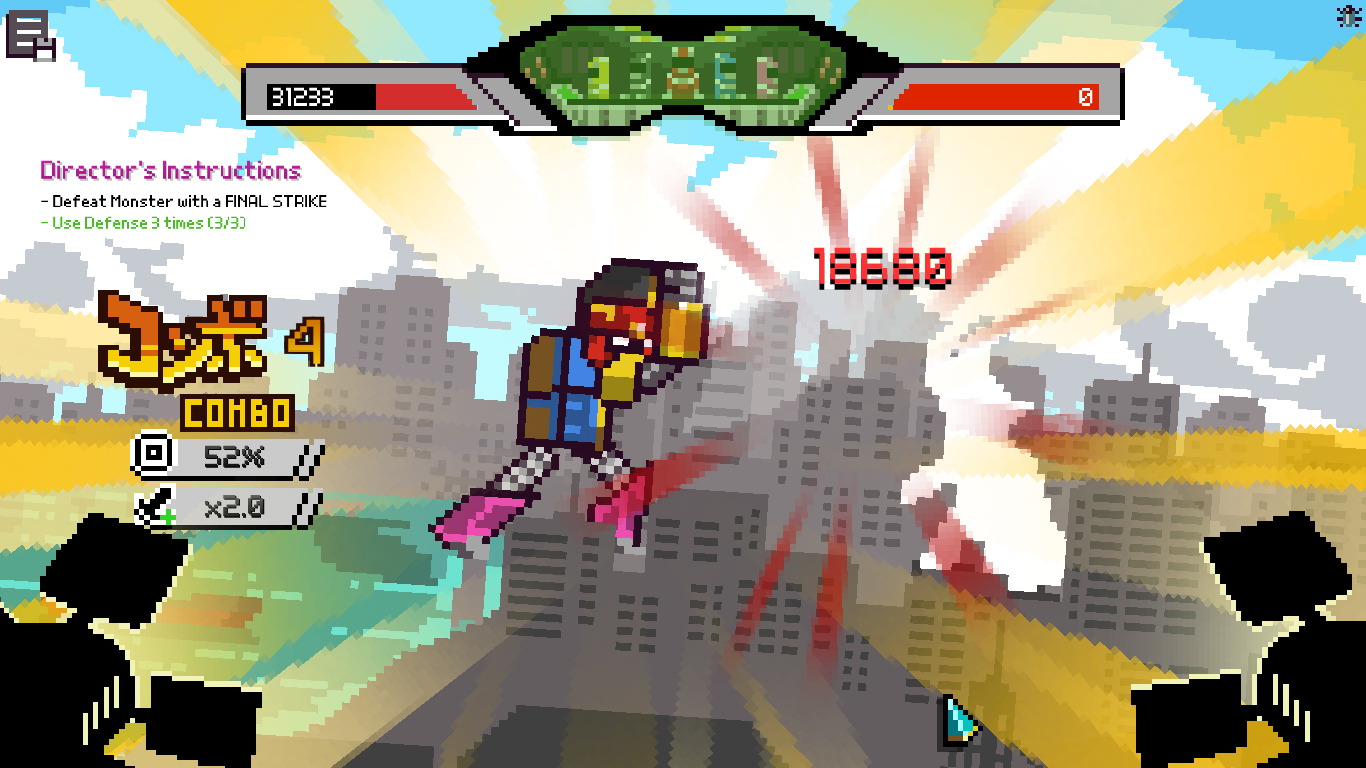 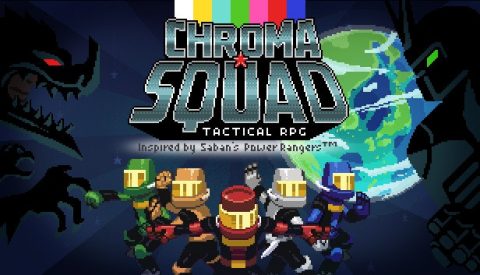 Awhile back, you may have heard of an interesting story about a small dev studio from Brazil being sued by Saban Entertainment for supposedly infringing on their Power Rangers license. In reality, that small studio, Behold Studios, were making a game paying tribute to the original sentai shows Power Rangers came from (alongside many other tokusatsu properties). This was probably the first time most people had heard of Chroma Squad, despite its successful kickstarter campaign, and pushed it further into the lime light – because a greedy corporation nearly destroyed it for no good reason at all. 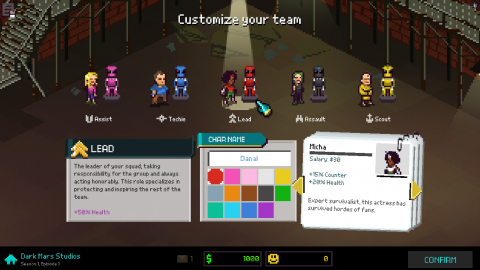 Even if you didn’t know this story, you would after playing the game, because a major early plot line revolves around your managed tokusatsu studio being threatened with legal action by your old director, originally named “Dr. Mi Ah” before a patch (a very obvious allusion to Haim Saban of Saban Entertainment), and it either leads to you beating him up after he tries sabotaging your show or fighting his lawyer – who is literally the devil. He also becomes a giant devil and you have to punch him until he explodes with your giant robot.

The amazing thing about all of this is this isn’t even close to the highest levels of cheesy, sincere absurdity Chroma Squad embraces. 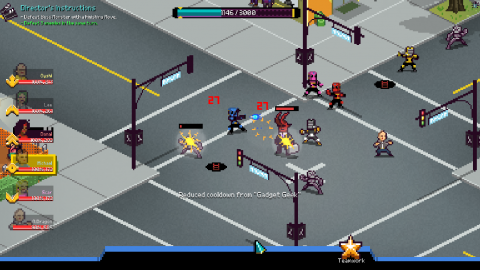 Released in 2015, Behold Studios’ Chroma Squad is a tokusatsu strategy game about a team of stuntmen who quit their gig and create their own series, and you get to control them, run the studio, and film episodes through a turn based strategy battle system. You start the game deciding who takes what place on the squad (leader, assault, techie, assist, and scout) from a list of people based on actors and kickstarter backers. And also a robot. And an alien. Oh, and also a beaver, whom also has two special achievements attached to him. After deciding who does what based on their bonuses and how they can add to their class bonuses, you can get upgrades for your studio, shop for props, craft your own from materials found in fights or purchased in packs, manage your marketing strategy, upgrade and customize your team mech, and change your team’s skill list and equipment. From there, you can select from a few possible episodes and start making a season of the show, with major diverging moments popping up in the first two seasons and at the end of season four.

The sim elements are simple, but they all become involving because every single one has an effect on what you can do in fights and how many resources you can gain. They all center around trying to get a larger audience, which means you can’t simply pick the best strategy to finish a fight. Remember, the audience wants a show, so the best choice is usually to prolong a battle to work in time for flashy moves. The tokusatsu theme is well utilized, gamifying many popular tropes and norms of the genre. For example, anyone on the team can enter the teamwork pose to toss their friends around and help them cover ground (assault getting a double bonus), or perform team attacks for big damage on single enemies. Those unique skills and talents of each class also radically change how every character controls and functions, from the scout getting the potential to be a powerful glass cannon who can zip all over the field, to the lead lacking mobility options and instead giving boosts to the team or acting as a tank when things get tough for more fragile members. 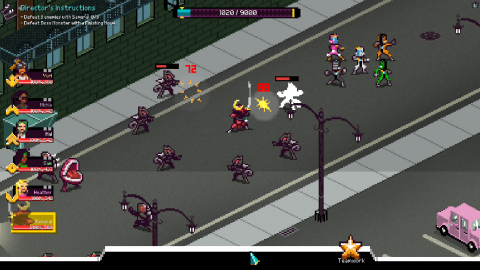 Using skills, healing, acrobatics, team attacks and more all adds to audience numbers for the episode, but you also get big boosts through director instructions. Every episode has a set of instructions for every scene, so you simply have to follow them for a big boost. Some are simple enough, like defeating an enemy a certain way or defeating a set amount of enemies in a time limit, but others become challenges in their own right. One of the most common instructions, though, is finishing a boss monster with a finisher, which can be performed when all five squad members are in attack range and four are in a teamwork pose before the fifth makes their attack. It’s always satisfying to land, but it tends to become a challenge against enemies that like using area of effect attacks that scatter the team a little. Paying attention to your surroundings or knowing where to place everyone to get in position only when absolutely needed becomes a must. Keeping a high audience is absolutely necessary, as low ratings will instantly tank your show and end the game.

There are other tricks to deal with this issue. Marketing can greatly boost your numbers and convert viewers to proper fans faster, but they also carry other perks. Some marketing companies you can hire offer stat boosts for episodes, increased material drops, solid cash bonuses, and other such lovely things, though you can only activate the perks with the right amount of fan power (gained from gaining fans from good episodes). The other strategy at your disposal is studio management, as different upgrades you can get will grant similar bonuses, but come with episode costs you have to keep up with. While crafting bonuses and item discounts may be the most useful in the long term, getting some accuracy buffs from lights or higher audience numbers from a green screen may be a wiser call due to their lower initial cost. 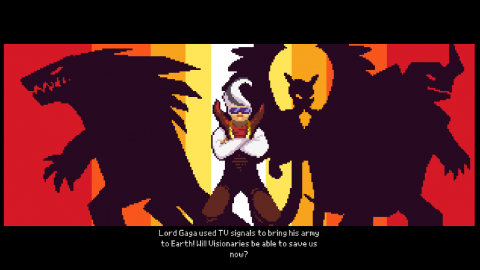 However, it’s also vital to keep updating your props and uniforms. Your squad can’t level up, so you instead must keep buying and crafting new props for them to use with better stats. The shop is great if you just want solid stat boosts, but you’ll need to collect materials to make new props with a chance at extra stat boosts during crafting. This is where you can get really crazy and customize your team as you see fit. It’s also where you’ll probably sink most of your money. Crafting is free, but buying extra materials can only be done with costly material packs that have randomized output. This could have the potential to be aggravating, but it instead often forces you to try another prop when you can’t make the one you want, sometimes giving you unexpectedly impressive equipment and weapons. You also need to collect materials to upgrade your mech’s parts and make it stronger, tougher, and more varied in its skill set.

Some episodes have a special kaiju boss battle at the end, where the team pilots a mecha to fight it. It’s still a turn based fight, but now everything is decided on timing with QTEs. You can do a basic punch combo, having to press when the cursor is in the yellow or white of a bar for a hit, guard with a shield overlay match QTE, and activate a special move or finisher. Special moves can heal or manage buffs, while finishers are super powerful attacks you often need to use at the end of a fight to please the audience. Finishers, guards, and a few special moves also get multipliers when used at the end of combos, gaining more power based on how long you kept a punch combo going. These mech fights are the most visually spectacular parts of the game, but do suffer from their simplicity compared to the rest of the game. Once you master the punch hit meter and get enough accuracy buffing parts, you’ve pretty much won with little effort. Still, it’s hard to deny that they make a great empowering reward for a hard won fight. Few things are as satisfying as watching a monster explode from a laser sword slash (though some sound effects seem absent for a few finishers). 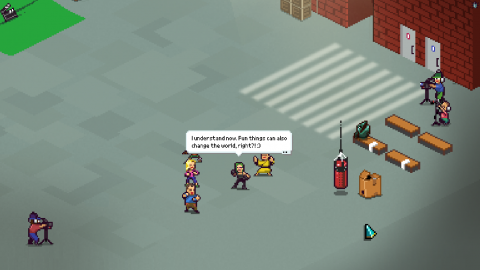 Chroma Squad really makes great use of a simple set of mechanics to compliment the story and concepts at play, while the writing and presentation handles the rest. There are few games as openly loving and earnest as this one. Kickstarter backers cameo all over the game in cute little moments where they’re either rescued by the squad or help them out in combat with unique abilities. Many of the monsters you face are silly and ridiculous, including an evil Spongebob Squarepants and a Colin’s Bear monster in one route that has an edgy evil form (whom can still do the Colin’s Bear dance to damage everyone on your team – no joke). The conversations between characters are heartfelt and honest in adorable ways, including a short scene in season one where the team talk about avoiding sexist stereotypes in the newest episode due to their responsibility as entertainers. Most importantly, the game is bloated with tokusatsu references, really kicked up a notch at the season four route split. It’s possible to play an entire season solo as a new Kamen Rider, and it’s incredible how well the game balances the tone shift with some of the most broken self-buffs in the game. The fact this little mini-campaign is in here at all is kind of incredible, as it completely shifts the game’s mechanical focus and design on its head, letting you mow down dozens of bad guys with great ease, resulting in some of the most inventive boss fights in the entire game. Plus, using the velocity of your motorcycle to throw yourself at a line of enemies to utterly decimate them never gets old.

Moves are flashy, the most minor of characters are instantly endearing, and the villains are all equally ridiculous or simply overblown. Even when the game makes a big reveal that starts moving the game in a slightly darker direction, the monster fights remain bizarre and pun-filled. Chroma Squad simply isn’t a love letter to tokusatsu, it’s the entire genre rebuilt with game mechanics and memes that are far more amusing then they should be. Even with little knowledge of the genre, the game is simply a joy from start to finish, with three different endings and four difficulty modes to play with. It’s filled with stuff to do, and most importantly, in conveys what makes tokusatsu so beloved to those who may have never watched a Super Sentai show in their life. It doubles as a gateway into turn based strategy and the ever silly and fire blooded world of tokusatsu superhero shows, a true classic that deserves to be played by as wide an audience as possible. 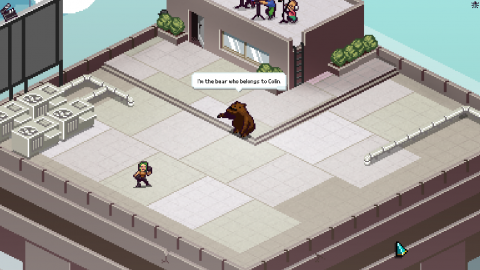 Special mention must also be made by the game’s studio options. You can name your squad whatever you want, change their catchphrases, and even pick custom colors for your guys. It adds nothing to the game mechanically, but it perfectly summarizes the game’s greatest accomplishment. It lets you live out a tokusatsu hero’s journey, from minor minion fighter to galaxy savior, and makes it clear that it’s all YOUR team, YOUR decisions, YOUR special moves. As the game keeps saying, this is a story about imagination and dreams, so express yourself as you see fit and go beat up that meme bear in the most ridiculously awesome way possible. Nobody’s stopping you.