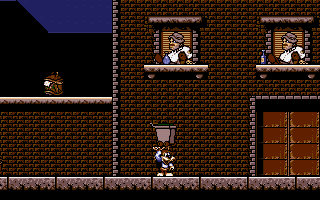 At a first glance, Titus the Fox has nothing special about it. This would be one among dozens of unremarkable platformers starring humanoid animals… were it not for the fact that most stages are urban landscapes instead of the typical snowy mountains and magical forests, and the hero has the oddly specific goal to reach Marrakech, a real world city. There’s a reason for this: the game exists because of a novelty song, of all things. 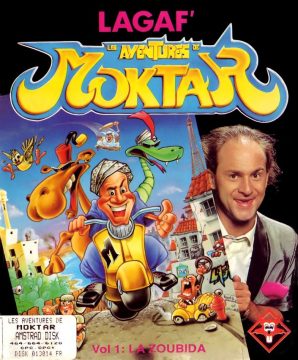 The game was originally released in 1991 under the unwieldy title Lagaf’: Les Aventures de Moktar – Vol.1: La Zoubida. A bit of explanation: Lagaf’ is the stage name of French comedian Vincent Rouil, who became famous in the early 90s for a few Euro-dance parody songs. One of these was “La Zoubida”, named after the love interest of the French-Arabic Moktar, the song’s protagonist; they both end up in jail because Moktar goes to pick her up with a golden scooter that he had stolen. That song then became a chart-topper hit in France, to the point that Titus decided to make a whole game based on it: the predictable platformer with La Zoubida in the usual role of the kidnapped girlfriend and Moktar as the hero who has to go, well, to Marrakech and back to save her from a sheik or something. As for the “Vol. 1”, the song had been such a success (going platinum and all) that a sequel looked like a sure thing; however, Lagaf’ abandoned music parodies altogether and reinvented himself as a TV presenter and actor. So, no further games starring the turbaned guy were produced.

Les Aventures de Moktar was endorsed by Lagaf’ himself and the sprite of Moktar is directly based on the stereotyped Arabian outfit that he wears in the song’s bizarre video clip. Said clip contains some video game-style animations, that might even have been taken from a beta version of the game. Eventually the developers realized that nobody outside France ever heard of Rouil and his song about some Arab dude, so they decided to re-release the game in 1992 as Titus the Fox, replacing Moktar and La Zoubida’s sprites with their cartoony mascot and his vixen girlfriend Foxy. Everything else remained mostly the same, besides the image of Moktar in the intro being redrawn as the fox and a couple dark-skinned enemies being recolored and given less caricatured appearances.

The biggest change was the final stage: it was outright cut, with stage 14 leading directly to the brief ending cinema. This was perhaps done to disassociate the game from the comedian and his hit: that stage featured a rendition of “La Zoubida” as BGM, Moktar’s infamous golden scooter as an item and posters with Rouil’s face. Most likely, the programmers removed the whole stage instead of just these elements because it was a short horizontal plane with a few mostly stationary enemies and a very lame final boss, adding nothing to the previous tough platforming challenges.

In general, the game itself is an average Euro-platformer with decent graphics and sound but kind of slow and clunky gameplay. It looks and plays almost the same as Titus’ earlier The Blues Brothers, only harder, with much more emphasis on secret areas and an implementation of physics. At 15 stages it is also much longer, and it has that dumb Titus quirk where you’re not given the passwords, but you have to find them in the levels, in the form of oil lamp icons, together with the save points (padlock icons). Sometimes these lamps are hidden very well (or aren’t there at all) and, since most levels are huge, extending in all directions, it goes without saying that the developers made a bad design choice. There’s also a ton of energy icons scattered around: grabbing them is always recommended, since they are counted in the end-level tally to rack up extra lives, which will be needed since the game quickly becomes hard. 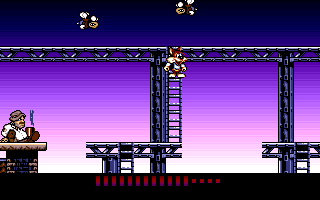 It is often stated that the graphics of Western games in recent generations suffered from the “Real is brown” phenomenon, but several of these have nothing on Titus: our hero starts from dingy banlieues, subway stations, catacombs, sewers and gets into equally drab and dusty pyramids, minarets and oil rigs. The setting and characters are goofy caricatures, as befitting of the song’s parody nature and Lagaf’s satirical comedy: the Parisian stages are full of thugs, burglars, homeless drunkards and creepy babies, while on the road to Marrakech our guy will fight fakirs, mummies, pirates and guards with scimitars. Once there, after having found La Zoubida, he goes back to France by getting inside a maze-like pipeline (!!), then completes another stage on the roofs of Paris before finally reaching his neighborhood for the standard five-second ending animation.

Just like in The Blues Brothers, you can’t jump on enemies to defeat them, but you must pick up and throw objects at them (bizarrely, you can pick some enemies up too, but it’s not really useful) or make them drop over them. Moktar/Titus can also place the objects on the ground and stack them, a technique that will be needed to reach some out-of-the-way bonuses, hidden passages, or to progress past tall walls. Physics plays a fairly big part in the game, since objects come in three flavors: weapons (random things you throw), items for motion (springs, and also vehicles like magic carpets, skateboards, carts etc.) or both (bouncing balls, that you can throw at baddies but also place and use as trampolines). There is tons of stuff scattered everywhere, so you’ll be tempted to just pick everything up and hurl it at everything that moves (or doesn’t), but that approach only works in the first two very linear levels. The fact is, whenever a thrown weapon object hits an enemy, it disappears, but baddies are everywhere and since the stages become increasingly big and convoluted, you never know how many items you’ll have to carry and/or stack, and where, in order to progress and find the shortcuts. Meanwhile, balls and motion objects are indestructible, so you can use them to defeat enemies as much as you want, but they follow the rules of physics, so they’re hard to use for precision platforming and there’s the risk to send them in places where you can’t recover them. In any case, clever use of magic carpets can let you bypass huge chunks of levels. Hilariously, when you find the cage where La Zoubida/Foxy is held in level 11, you have to take and carry it to the end of the stage, and the game treats it like any other item (but you can’t kill enemies with her), meaning that you can toss your girlfriend around as if she were some random piece of junk.

As one can see, this seemingly common platformer adds the items’ properties that partially turn it into a puzzler, together with the standard challenges including insta-kill pits and spikes. No wonder that the programmers added shortcut keys that slow the speed down, kill Titus on the spot, or even end the game then and there, in the case one ever gets stuck with no way to get back. And no wonder that some players reported getting stuck on certain levels for literally months. However, these features also turned it into a cult classic in certain corners, with players spending years to uncover all possible paths, secrets and ways to play it in addition to the usual speedrunning challenges. 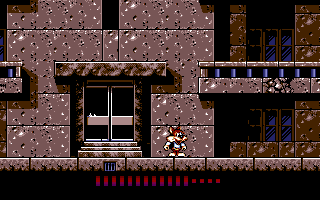 The best version of the game are in order the ones for Amiga, Atari ST and DOS, in terms of better graphics, better music (mostly typical Arabian-sounding tunes) and fairly fluid scrolling. The Atari one has flip-screen scrolling, making things slightly harder. The DOS one is more difficult, since it has much choppier scrolling, and as such enemies suddenly appear without having proper time to react, and it doesn’t have the 2-second invincibility time after being hit. It is the only one that has the energy bar appearing only when hit, getting energy icons or when the game is paused, while the others have it on screen at all times. Also, the sound effects are on the same channel as the music, so every time you pick an icon up the BGM restarts, with an annoying effect. This version has also been released on Steam and GOG.com (as were two other Titus platformers, Prehistorik 1 and 2), with the latter also including the original Les Aventures de Moktar game.

The Amstrad CPC version is cut down and revisited, in that it has only seven shorter stages, in a different order (i.e. the pyramid is sandwiched between two French areas), and one of them is wholly original, being some sort of flower garden; it also ends immediately after Titus finds Foxy in Marrakech, without the return trip to Paris. Amusingly, the artists hid some environmental slogans written with the game’s tiles: “BAN BLOOD SPORTS” and “STOP THE FUR TRADE”. In general the graphics are rendered well for the system, and are also more colorful than the dark muted tones of the original. But the slow scrolling, sluggish sprite movement and flickering make things once again harder, especially when you have to move and stack objects.

The only console port, for Game Boy, is a mediocre approximation of the original game. It was re-released for Game Boy Color in 2000, with a cover that makes it look like a totally generic cutesy colorful platformer full of animals. The discrepancy can be explained by the fact that apparently a game named Baby Titus or Titus Jr. was being developed for the Nintendo console but ultimately cancelled, and it does look every bit the stereotyped unremarkable game promised by that cover.

The port consists of only six two-part short stages (the GBC version adds an extra one at the beginning), each one ending with an illustration of Titus and a bonus stage where you have 100 seconds to pick up as many energy icons as possible and reach the exit. It’s quite simplified: there are no passwords, the stages are smaller, much more linear, made with bits and parts from the originals; there are just a few enemy types, no bosses and you can’t stack stuff any longer; a welcome addition though is that crates no longer disappear when you throw them at an enemy. On the other hand, collision detection is flawed, flicker abounds and hidden platforms/walls seem to appear and disappear at random. There’s an option to toggle the difficulty between easy and hard, but it seems to only affect the sprites’ speed. Finally, by linking two consoles with the link cable, one can have a simultaneous 2-players mode, with player 2 taking the part of Titus’ identical cousin Zorro (fittingly meaning “fox” in Spanish). The “best” thing, however, is that the game abruptly ends in the same apartment complex where we meet La Zoubida/Foxy for the first time, i.e. stage 7 of the original game, or halfway through it, so… what was even the point of going all the way to Marrakech and return?!?

http://ttf.mine.nu/ The most comprehensive Titus the Fox/Moktar fan site on the web, complete with maps, trainers, walkthroughs and even a level editor.

ToMarrakechAndBack An early example of single-purpose YouTube channel, video walkthroughs for each level of Titus the Fox.

MobyGames Source for most of the covers and some screenshots.