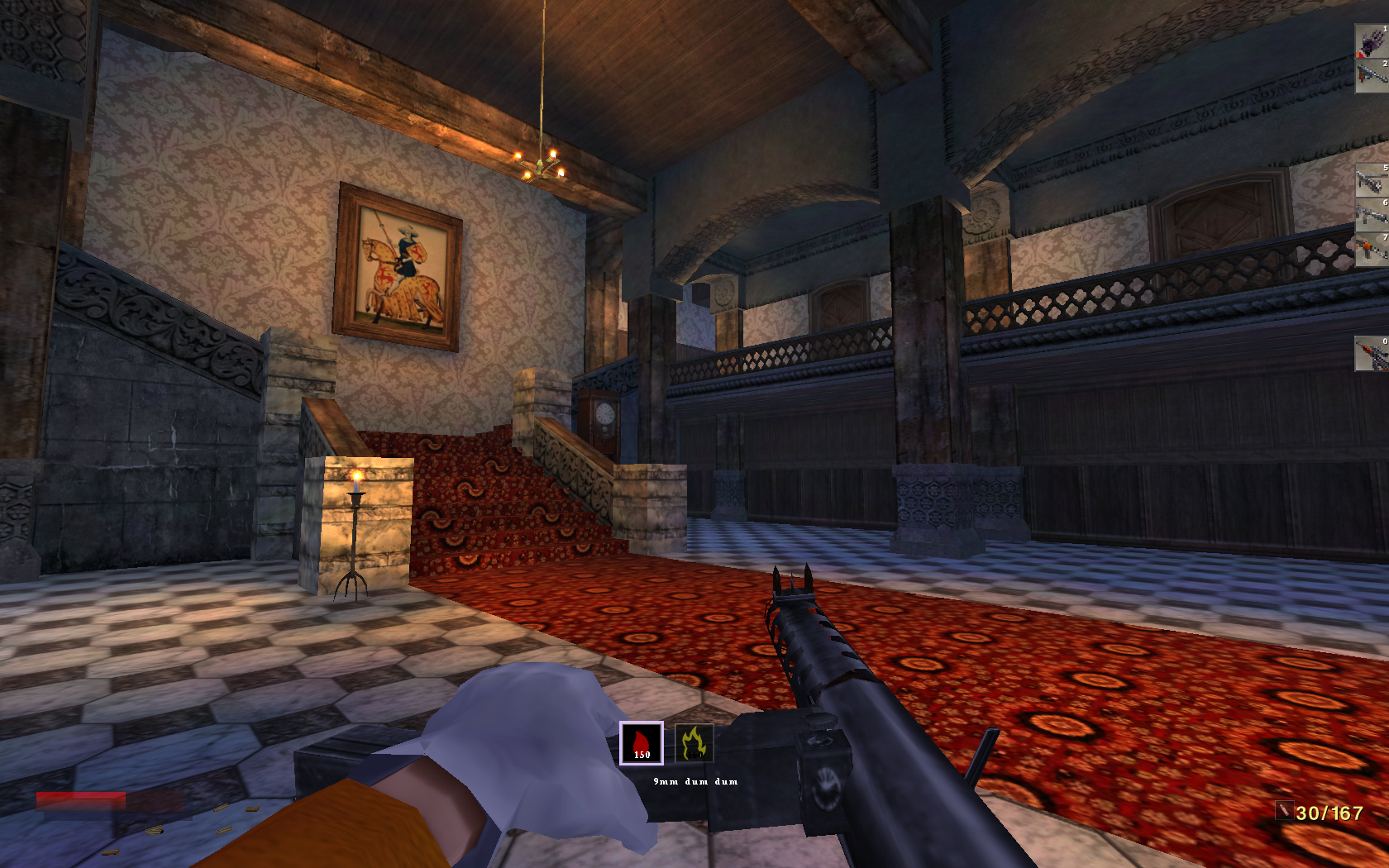 The Operative: No One Lives Forever - Windows, PlayStation 2 (2000)

Founded in 1994, Monolith Productions made a name for themselves in the mid-1990s with first person shooters like Blood and Shogo. Their next FPS began production in 1998, after the release of Shogo. The game designer at the time, Craig Hubbard expressed that Shogo “fell embarrassingly short [of the team] original design goals” and was a “grim remainder of the perils of wild optimism” referencing the small dev team composed of 18 members. The team was keen on not making the same mistakes especially after the rocky release of Blood II: The Chosen, released in the same year. They felt that “they had a lot to prove, both to ourselves and the gaming public.”

Monolith had problems finding a publisher and had multiple approvals by different publishers before signing a deal with Fox Interactive. During this time, the concept for this new mutated constantly, starting from a mission based, anime-inspired spiritual successor to Shogo, to a 60’s spy-movie based first person shooter. After signing with Fox the team drafted this reference of a spy story with strong narrative and despicable villains starring Adam Church, a spy working for MI0. By July 1999, Monolith decided to introduce major changes when the gaming press repeatedly made comparisons to James Bond video games (which had sold more than 8 million units just with Rare’s GoldenEye 007 on the Nintendo 64). The team changed the main character to a female protagonist called Cate Archer, who works for a secret organization called UNITY. And thus, The Operative: No One Lives Forever was born. The game runs on the LithTech 2.0 engine, an update over Blood II and Shogo from two years prior. 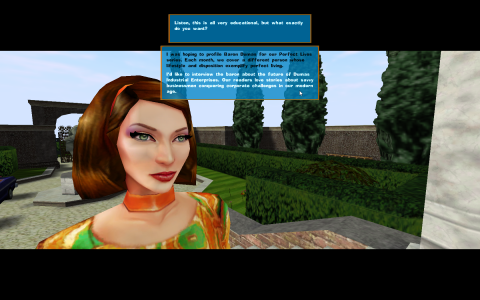 The series focuses on superspy Cate Archer traveling around the world to gain information to disrupt the evil agency called H.A.R.M. Cate has all the characteristics of Bond or other famous spies in the 60s era, except she has to tackle the rampant sexism that a woman would have faced in that time. The most defining example is Mr. Smith, the Mission Coordinator of the UNITY team: he constantly reminds Cate that she is not qualified for the missions she’s assigned, and on multiple occasions, he orders Cate to follow the orders of someone else just for the sake of it.

The art style is reminiscent of Euro spy movies with bright and psychedelic colors for realistic places such as castles, palaces, secret underground labs and a space station. The developers really plastered this aesthetic everywhere, from the menus to the interiors of the places you visit, each one has a mix of pop culture with futuristic environments, topped off with a bit of wackiness by lots of visual gags such as the collectables that contain amusing pieces of dialogue. 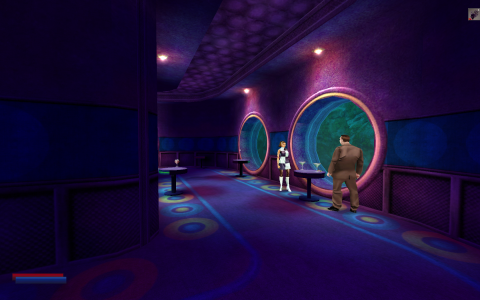 The team put a lot of emphasis on humor à la Pink Panther with absurd dialogue between the various NPC (soldiers, doctors, construction workers) interacting by referencing famous TV series at the time, major events such as the rise of The Beatles, famous sports car manufacturers, and some exotic musicians. The soundtrack was produced by Guy Whitmore and the game has a technology that adapts the score on the fly: this works in two ways, one is helping the player understand he has got caught or he’s going to have a gunfight switching the music to an high tempo, meanwhile sneaking and silently eliminating the enemies slows down the music to a relaxing pace. The main title theme is the magnum opus of the OST: it nails the instruments used in those movies with guitars, trombones and a chorus that fits nicely with the overall theme.

The level design is fantastic, and it feels rewarding by letting the player take multiple ways to approach the situation, an example of this is the first part of the Safecracker mission – Cate has to sneak around a construction zone to turn on a lift. The ground level is vast and you will need to reach the generator located in an underground level that can be accessed by slamming a forklift into a garage door, this generates a lot of noise and will lead to a gunfight. However, you can entirely avoid this by having the lockpick gadget and taking another route, forcing some locks and picking off some enemies with a silenced gun or a crossbow. You also have access to a lot of gadgets during the missions and the player is encouraged to try to solve every level in multiple ways from sneaking and avoiding danger to going guns blazing and murdering everyone. 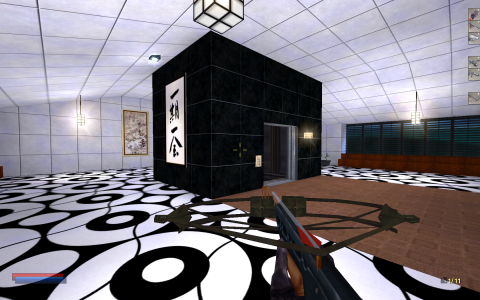 At the beginning of each mission, Cate will be instructed to the objectives of her mission and after that to the Santa’s Workshop which acts like a tutorial to the various gadgets, much like how Q would put on demonstrations in the Bong films. The player can select between default or custom equipment before starting a mission and especially some gadgets such as the Barrette-Lockpick, the Codebreaker and the Lighter (a disguised welder) are recommended for most missions for their versatility. All the gadgets are disguised as every-day items so as to not alarm the civilians and some of them have multiple uses by using the alt-fire.

The developers consciously balanced the levels so the player can’t get stuck; if a gadget is needed but not provided in the default equipment, it’s surely hidden in a room of the current map. This once again encourages the player to explore every nook and cranny and get immersed in those gorgeous places. Every objective has clear markings yet the player never feels to be forced to follow a scripted way except for some brief timed segments in which the objective has to be reached as soon as possible. 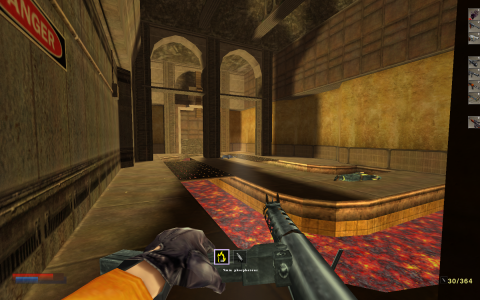 The main characters are fully fleshed out, as least as much as they can be for an FPS, each with distinct personality: Cate always has a witty answer and loves to trash talk to Mr. Smith (one of the two superiors) at every briefing, Mr. Jones (the other superior) is a chill person who isn’t as negative as Smith regarding to Cate being sent for those difficult missions, yet he allows her to perform only because there is a manpower shortage in UNITY. For some missions, Cate will have a sidekick: early on, this is Bruno Lawrie, a “fussy aunt” with a distinctive affection for Cate, while in later ones, you’re joined by Agent Goodman (a jab to the character of Bond), a dumb and reckless American operative who likes to blow up everything to “get the job done”.

The main antagonists all have the same intent, which are all parodies of Bond villains, and as such, they have absurd goals or beliefs. A distinctive example is Magnus Armstrong, an always drunk Scottish demolitions expert. In the campaign he manages to knock out Cate multiple times between the campaign, yet every time he doesn’t kill her because “it’s unfair to kill a Scottish that cannot fight back” despite his henchmen pleadimg to get rid of her. 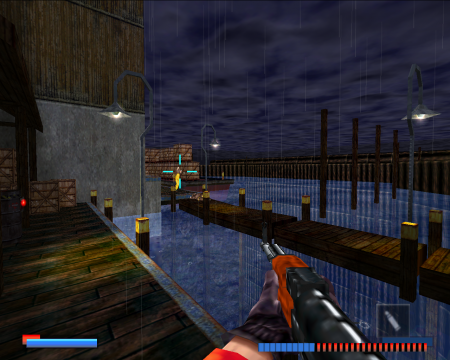 No One Lives Forever was a sales success, and had a Game of the Year re-release in 2001 that includes a bonus level, Rest and Relaxation, which begins just after the last level of the main campaign. In this new chapter, Cate discovers HARM has a secret operation on the tropical island she was on a vacation and must stop them. The GOTY edition also includes the official strategy guide, more multiplayer maps that were already downloadable, and the editing tools for modders.

A console port for the PlayStation 2 was released in 2002 by Monolith themselves. It has a new chapter, Nine Years Ago, divided into three parts interspersed every time Cate gets knocked out in the main campaign. This chapter is a flashback to the days when Cate was a burglar before joining UNITY.

Due to the hardware limits, this port has some changes in the gameplay department. There is no multiplayer or split screen option, no HUD customization, sneaking is removed and so the equipment selection, which makes some intelligence items unavailable. Some scenes are broken up in smaller levels due to console RAM restrictions, and there is an entirely new soundtrack. Even with these changes, the game still struggles to run at a capable frame rate. While it has higher resolution models for the characters than the original PC version, there are graphical artifacts and slowdowns in areas with more than one enemy. This also affects the cutscenes which most of the time run at half the framerate.

Famed Doom programmer John Carmack once famously said that video games didn’t need a storyline any more than a porno did. For much of the 1990s, this was true of first-person shooters – even games like Duke Nukem 3D and Shogo barely had stories, and their personality didn’t extend beyond referencing 80s action movies and anime, respectively. No One Lives Forever still owes a tremendous debt to the media that came before it, but between its amusing characters, funny dialogue, and lively, colorful aesthetic, crafted one of the most unique FPS games of the era…before it was dragged back into sci-fi and military shooters with the popularity of Halo and Call of Duty. For the most part, it holds up remarkably well too, except for a handful of instant-fail stealth sections.

No One Lives Forever received critical acclaim and many reviewers at the time said it was among the best FPS since Half-Life. The sheer amount of GOTY awards brought Sierra to order a sequel which came out in 2002 called No One Lives Forever 2: A Spy in H.A.R.M’s Way. Unfortunately, substantial legal compilations have prevented the game from seeing any modern digital releases, and modern versions of Windows have problems running the game without using fanmade patches.