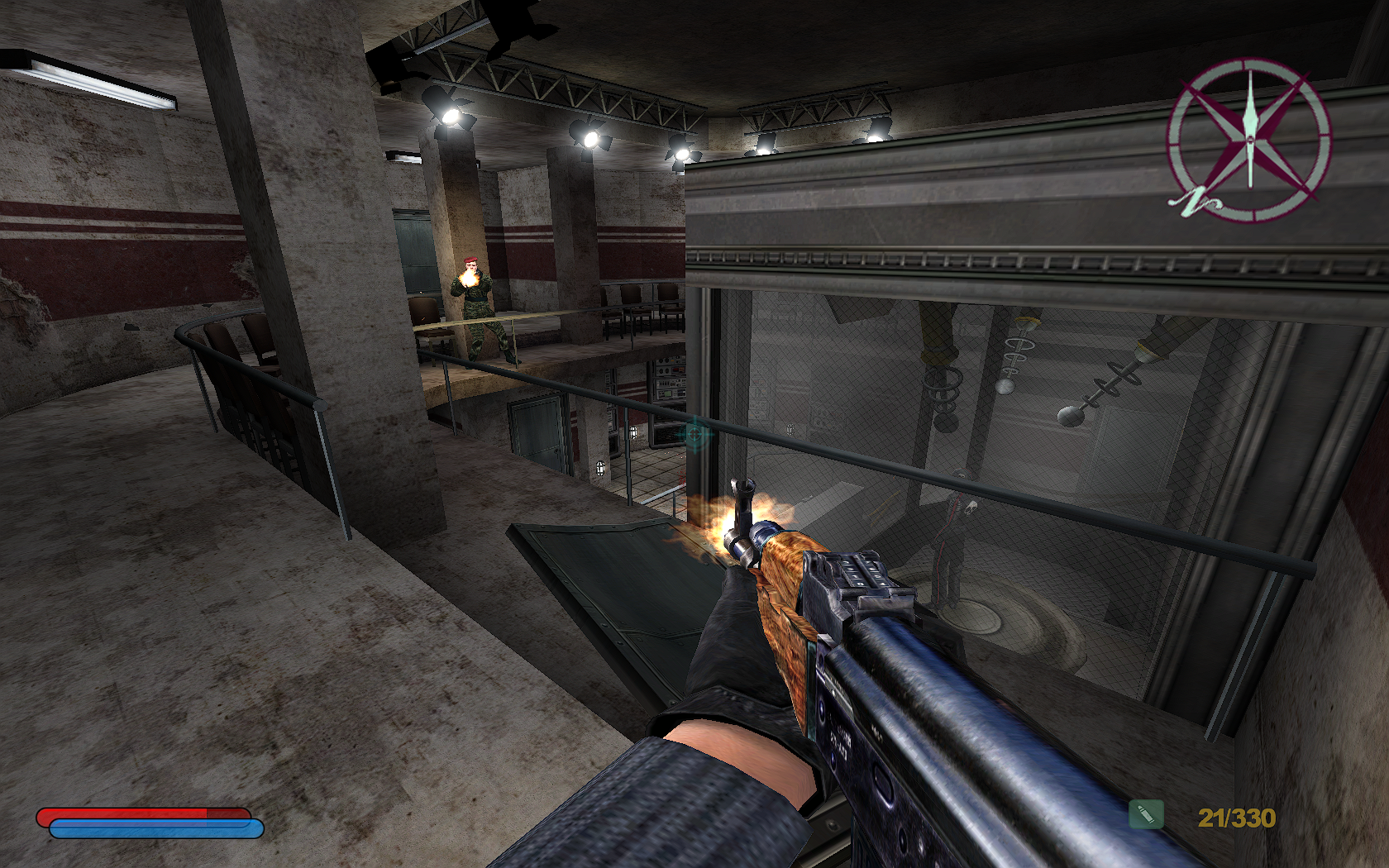 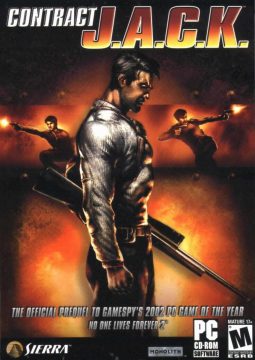 Coming after the success of No One Lives Forever 2, Monolith developed a third game, which is more of a spinoff. Contract J.A.C.K (“Just Another Contract Killer”) is prequel is set in the time frame between the events of the original NOLF and NOLF2, and follows John Jack, a professional killer recruited by H.A.R.M to help sabotaging a rival criminal organization called “Danger! Danger!”. Despite being set in the same universe and trying to tie in with the story only two characters are returning: Dimitrij Volkov (the head of H.A.R.M) and Dr.Harij, a mad scientist encountered in the Indian levels in NOLF2.

Just from the start, we can see this title is heavily focused on the action and entirely ditches the elements that made the first two games unique: an entertaining and curated story, interesting gadgets and levels full of secrets, a Bond-esque setting through the entire series. J.A.C.K is also pretty short and the entire game (composed of 10 levels in total) can be completed in 3-4 hours maximum. This title received mixed reviews, most of them criticizing the really short and rushed levels, the dull gunplay and the dumb AI and the overall mediocrity surrounding the gameplay and the story.

So, what went wrong? 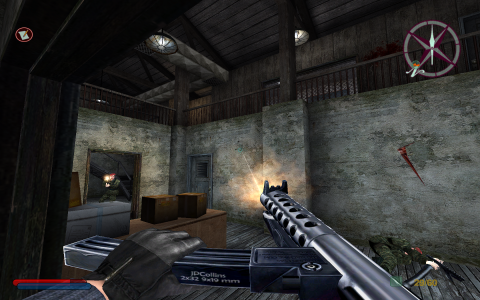 J.A.C.K completely ditches the stealth elements that characterized the entire series to fully focus on the action part. Gone are the gadgets, the intelligence items and the skill system since Jack can use heavy armor and med kits from the beginning of the game. Gone are the melee weapons, replaced by pitiful-damaging fists, and gone is the Utility Launcher. Through the game, Jack will mostly use AK-47s, the Ithaca Combat Shotgun and the 9mm SMG. Some returning weapons are the sniper rifle, the grenade launcher and the stun / incendiary grenades. Two new weapons join the arsenal: the .50 Handgun (a Desert Eagle) which is pretty anachronistic given the time setting of the 60’s, a Laser Rifle and the Plasma Cannon for a brief moment.

There is a huge issue with pacing and gameplay balancing: ammo can be plentiful or scarce, there is no in-between. The player will have to juggle between multiple types of SMG since enemies drop a bit of every ammo type, this can be downright frustrating when enemies from multiple locations will focus fire on Jack. Enemies will die in a few shots but so does the player. If balanced properly, this would be fine, except enemies come in huge waves and they’re relentless. The AI feels way dumber than in NOLF2 despite being built on the same technology. Enemies will often get stuck by grouping together in the same path making killing groups of enemies a breeze. Some scenes are scripted when the player kills enough enemies so the player should check every corner as enemies often tend to get stuck in crates or in angles. 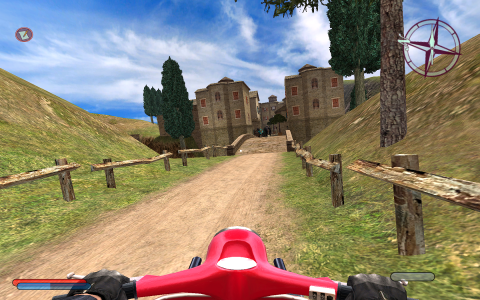 Every level is linear and they aren’t as intricate as since there is no revisiting of any segment until a brief part in the Lunar level which NOLF fans will appreciate. The pacing is all the same between levels: the player gets dropped in a tight corner, gets instantly ambushed by a group of enemies and if they’re not fast enough, they’ll die in a couple of seconds. The iconic NOLF secrets are replaced with something reminiscent of old-school FPSs: extra ammo, usually stun or incendiary grenades. There is no incentive to really get all of the secrets and this is really disappointing.

J.A.C.K is composed of 7 chapters ranging from Czechoslovakia, Malta, the Moon and Italy. Some of the chapters are composed of a single level which can be finished in five to fifteen minutes. The ending is disappointing and rushed as it’s a simple boss fight without any depth and feels copy-pasted from the boss fight with Pierre, the French Mime in NOLF2. The game starts with a short text briefing and an intro video. Gone are the cutscenes between missions, replaced with a short text between loadings. There is no opening musical credit and most of the soundtrack is straight up taken from NOLF2.

The game just begins in the middle of the mission, when the protagonist is found to be interrogated by a gangster organization called Franco Syndicate. Jack manages to free himself but before he leaves with his car, he receives a phone call from Volkov telling him to report to a job interview in Malta, which Jack discovers it’s just a test to prove his worthiness. He gets a job in H.A.R.M, and for his first mission, must infiltrate a Czech military base to discover why Danger Danger is interested in this place. He discovers that the base is a secret rocket launch site and Danger is trying to recover Dr Harij from the destruction of the H.A.R.M Space Station by Cate in the first NOLF. Danger Danger is successful in launching a rocket full of men to the Moonyet Jack manages to follow them and fight them off after detonating the lunar base. He and Danger crash into Italy and he pursues Il Pazzo, the leader of the organization. 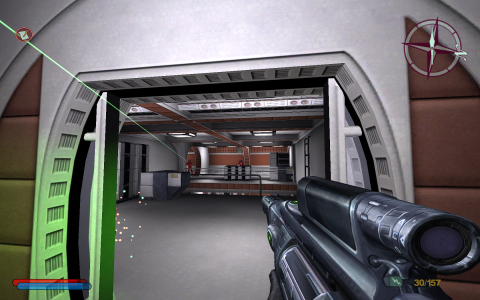 After a really cool pursuit on a Vespa, there is the final fight inside of a castle / villa where Jack he defeats him and save Harij. After rescuing him Jack returns to the base just to get shot by Volkov. The game ends with Jack walking towards Volkov skis, thus explaining why he was confined in a wheelchair through the entirety of the NOLF2 plot.

Neither Jack or Il Pazzo manage to feel as characterized as Cate or Volkov. This plot suffers from fast pacing without any motivation, since the player feels thrown into the mission without a real reason on why the main character would even try to get Volkov’s interest. Jack’s attitude as a selfish man à la Rambo just feels bland and doesn’t work as well as Cate did with her sassy attitude towards everyone. There isn’t enough time to get attached to the main character nor even know him enough to try to guess what he will do next.

The main villain is just a big stereotype of an Italian mafia boss and suffers from the same problems NOLF2 had in over-using a stereotype until it doesn’t feel funny. This isn’t counting the fact that he has, like Jack, very few voice lines unlike the other two games. The only two returning characters are just there to give a sense of connection to the universe, sadly they appear so far in between to justify their presence as they could be missing and there wouldn’t be a difference.

As a conclusion to the series, J.A.C.K leaves a bitter taste in the fans of the series by serving them a half baked game, rushed to the market without the labor of love that characterized the earlier titles. With a few months of polish, it would’ve probably come out as a decent spin off just to let NOLF fans have a final taste of what Monolith achieved with this saga. Nowadays, we know this wasn’t the latest project by Monolith and they definitely came back stronger than ever with the beginning of the successful F.E.A.R franchise, starting with the first title in 2005.

The Operative: No One Lives Forever

No One Lives Forever 2