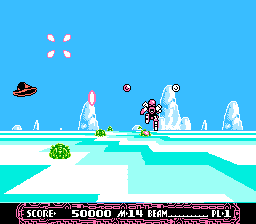 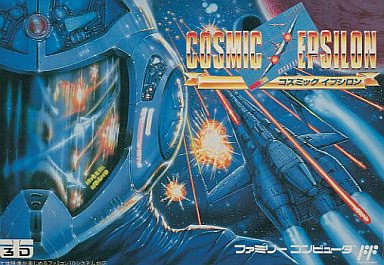 Most 8-bit games use simple color cycling effects to simulate a 3D perspective, such as the roads in something like Rad Racer, or the checkerboard patterns of Space Harrier. In comparison, Cosmic Epsilon, a rail shooter published by Asmik and developed by Home Data, is a technical achievement. The scaling landscapes here are not only more smoothly animated but also more varied, consisting of colored squares and rectangles. In motion, it looks incredibly cool. It’s also stunning in 3D, and a far better use of the accessory than Konami’s FDS shooter Falsion. 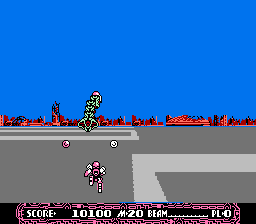 As far the game itself, your goal is to save the galaxy from the evil Epsilon Empire. You’ll visit various planets throughout the eight stages, where you skim the surface wearing a flying power suit; when traveling between them, you ride in a space fighter jet. Functionally, they’re about the same, though the game is easier to play as the power suit. Its lasers, represented as small satellite orbs that hover above your suit, make it easier to aim than other similar games, as you don’t have anything blocking your view. These stages are also more visually interesting, since most of the space levels look pretty same-y. You’re also equipped with a charge beam in both forms, as well as a limited number of homing missiles.

Alas, the game still suffers from the same types of issue as other 8-bit rail shooters. Despite the smoother ground animation, the enemy movement is still a little choppy. Your hitbox is also gigantic, and enemies tend to zoom in and shoot just close enough that it can be extremely hard to dodge their attacks. These types of foes can usually be shot down first, at least. Conversely, boss fights are quite difficult because it’s hard to tell where their weak point is, especially when most of them keep jumping around. The screen flashes when you hit it, but doing this consistently isn’t easy. You’ll also have to deal with environmental hazards, like solar flares. Most of the levels go on way too long, too, especially considering there’s no continue function (though there are cheats). A few stages have some interesting segments, though. In one planet, the battle begins in the clouds before you descend to the surface for the latter half. The final stage sends you through a dark tunnel, which is especially harrowing when you need to dodge through tight laser barriers. 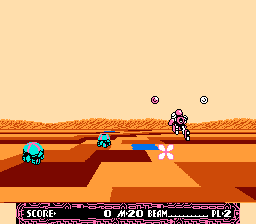 Cosmic Epsilon is fairly difficult, but it’s still easy to appreciate just based on how cool it looks. The music has a nice Sega Master System PSG feel to it, too. The game was scheduled to be released by Asmik in North America, but for whatever reason, never ended up making it to store shelves. Amusingly, if you enter the Konami code at the title screen, it spits back the phrase “I am not Konani [sic]”.