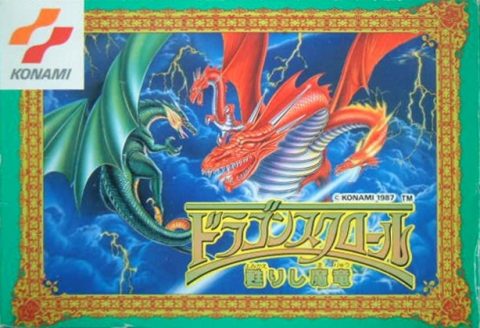 Dragon Scroll was Konami’s attempt at a Zelda-style action RPG, released just a little more than one and-a-half year after Miyamoto’s masterpiece. As usual the hardware didn’t leave much room for verbosity. Two divine dragons of polarized colors fought each other to the death aeons ago, now “three foolish men” are about to resurrect one of them. That’s already the gist of the story, and the game just drops you into the center of a hostile fantasy world without much information on who you are and what to do. All you can do in the beginning is to run around aimlessly and kill whatever monster is in sight. 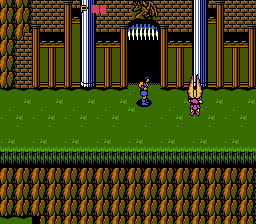 Eventually, some of the slain foes (there is also a handful of “normal” people who run away at sight for you to catch them) will spit out cryptic bits of wisdom with their dying breaths, and you learn that you’re actually in search for a couple of magic books, but why and where they’re located, that information is in another castle—maybe. There are quite a lot of these hints, but only half of them seem to make any sense at all. While only released in Japan, the game has since been fan translated, but it only makes understanding the game so much easier when it tells something like “make a wish at the statues in Kebi Falls,” with no information as to where the Kebi Falls are and how one would go about making a wish in this game!

Other than the strange mode of conversation, the game progresses along the Zelda formula: Find an item to use at the the next area, where you find new items that help you at yet another location, rinse, repeat. Usually you’ll get new spells, but there are also three different rods as weapons and some protective items. Boots make you run faster (it’s imperative to get these soon, lest you’ll eventually fall asleep due to the incredibly slow standard walking speed) and a crystal ball gives you an automap. The most unique of the bunch by 1987 standards is the “Tounges Liquid” (Tongues Liquid? Mistake in the fan-translation or intentional? Who knows…), which allows you to understand monsters that babble in exotic languages. 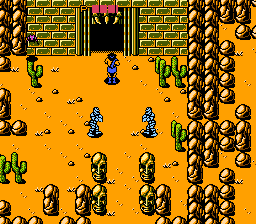 Like almost all console adventure games of the ’80s, Dragon Scroll is an obfuscate mess. Most “puzzles” are solved by using random spells on random landmarks at random locations to achieve random effects. Some are hinted at in dialogue, but by far not all, and the crucial clues often appear at fairly remote locations. So much of the time is spend running about suspicious statues and tree formations trying out different stuff until you run out of magic points. At least they’re relatively easy to recharge. In dungeons you find treasure chests that recharge either them or the HP, and each time the character levels up, they’re partly restored as well. The most odd way to recharge are the gambling rooms, where you can either win or lose MP by betting on a coin toss (heads is the Konami logo).

Aside from the cryptic puzzles, the game is actually not that hard, though. Combat is fairly straightforward unless enemies use projectiles, and single attackers are stunned for so long they often don’t even pose a thread at all. In the beginning it is quite easy to die since you start with ridiculously low HP (and because of that annoying 4-way walking typical for 8-bit RPGs), but even death isn’t much of an issue, as you just restart at a central point of the current area with all of your items and experience points intact. Progression is saved via passwords. 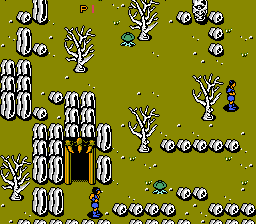 Dragon Scroll looks good for a 1987 NES game. The dungeons are all bland and samey, but the detailed exteriors and intro make The Legend of Zelda look like a generation away. The hero and many of the normal enemies are also twice the size as Link, although animations are still all two frames only. The music sounds uncannily familiar, although it doesn’t rip off any particular melodies it sounds as if the composer was specifically told to make it resemble a Zelda game just so much that no one would call them out for it. At least it is a pretty good interpretation of what an apocryphal Zelda game might sound like.

Although derivative of what came before, Dragon Scroll is a decent enough entry to the “get a FAQ or despair” ARPG school with comparatively high production values. It kinda deserved to fall into obscurity, but it also deserves being dug out by fans of that archaic adventure design philosophy celebrated in classics like the first two Zeldas or Castlevania II: Simon’s Quest.