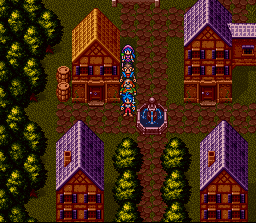 With the small success of the first game, Capcom naturally decided to do what they do best and make a sequel. So about a year after Breath of Fire‘s release, in September of 1994, Capcom released Breath of Fire II. This time, however, they had no association with Squaresoft, and released the game under their own flag. Unfortunately, this meant that Capcom would have to translate the game themselves. This turned out to be a huge mistake, as the translation of Breath of Fire II is its weakest point, making the story unintelligible at some points. Horrible translation aside, Breath of Fire II turned out to be a cult hit in America on top of its huge success in Japan, and so a new franchise was born.

One of the things that attracted a lot of people to Breath of Fire II were its strange, echoing similarities with the first game. Though they took place centuries apart, Breath of Fire II has some of the same locations, races, and story elements that the first Breath of Fire had. But this time, the world and races who inhabit it are much more developed. What you get is a much more epic game, with a more interesting story, a great feeling of history and nostalgic familiarity. 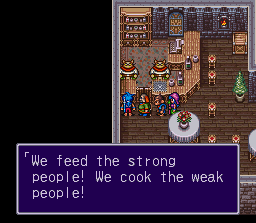 The story of Breath of Fire II takes place thousands of years after Breath of Fire, when the deeds of the first Ryu were long since forgotten, and his ancestors, the Dragons, had long since disappeared. A young boy named Ryu’s life is flipped upside down when one day, he goes out in the fields behind his town, falls asleep, and when he returns, no one remembers him, and his father and sister are gone. He runs away from the village with a young thief named Bow and takes up shelter in a cave. There they meet a horrific demon that nearly kills both of them. 10 years later, Ryu and his partner Bow, now rangers for hire, embark on a seemingly typical adventure that will tie them up in events they wont even be able to imagine, finding out the secrets of long lost civilizations, uncovering the mystery of a false religion, and confronting destiny.

Breath of Fire II, just like the first game in the series, has a colorful cast of characters, each with their own unique abilities, only this time they’re integrated more deeply into the game, making them not only nice addition to your party, but crucial for getting past certain obstacles.

Not the same Ryu from Breath of Fire. He seems to be some kind of reincarnation. Separated from his family, he finds friendship with a dog-boy, Bow, and together they set out to find adventure. As an adult, Ryu is a ranger, going around and helping those in need for a steady paycheck. However, in such a peaceful world, Ryu doesn’t find much work, and things are a bit tight. That’s all about to change.

Quite possibly the most gorgeous RPG heroine of all time, Nina is a distant descendant of Nina from the first game. Unfortunately, Nina was born a princess with black wings, a very bad omen in her country. Because of this, she was exiled from her own kingdom and travels the world as a wizard in training. Nina has no special abilities of her own, but her extremely powerful magic makes her a great asset to your party, especially during boss fights.

Bow, a half-man, half-floppy-eared pup, meets Ryu shortly after the game begins. Unlike Ryu, Bow is a mischievous thief that constantly gets Ryu into trouble. But despite all that, at the end of the day, they’re inseparable buddies. Bow’s special ability is available only in the hunting zones that pop up at random on the world map. Like Bo before him, Bow can shoot wild animals that inhabit these areas, only his crossbow doesn’t have the wind-up time that Bo’s standard longbow had, thus making Bow a much more useful hunter. Unfortunately, Bow becomes unavailable for a great stretch of the game, and by the time you get him back in your party, he’s so far behind on experience, it’s not worth using him anymore.

Rand doesn’t actually join your party until after Katt, but you’re introduced to him first. This hulking armadillo-man works at a coliseum Ryu investigates in search of a thief during one of his ranger missions. Rand helps Ryu infiltrate the competition, unraveling a sinister plot to take over the world. Intrigued by this, and also out of a job thanks to the death of his boss, Rand joins Ryu to see these strange events through. On the world map, Rand can roll into a ball, allowing you to travel very quickly without getting into random battles. In battle, Rand in his standard form isn’t very useful. He packs an insane amount of HP, but has no real offense.

Katt introduces us to one of the most popular half-animal races in Breath of Fire, and Japanese video games and anime in general; the cat girl. This feisty feline fighter first squares off against Ryu in a coliseum. When Ryu saves her from an assassination attempt, she vows to remain by his side forever. Katt’s ability to break obstacles like rocks and fences with her staff is invaluable to the quest and will be required for you to make progress at various points in the game. In combat, she’s one of the fastest and strongest characters, making her a definite keeper.

Sten the ape-man is one of the most colorful characters in the game. You first meet him when he attempts to steal Katt and Nina away from you. After expressing how lonely he is, he forcefully enters your party and remains an active character throughout the game. Much like Katt, Sten is required quite often to advance due to his ability to stretch his arms out and pull himself across wide chasms. In battle, Sten is extremely fast and has some decent offensive magic and physical attacks, making him a very well-rounded character.

Jean, along with Glenn from Chrono Trigger, proves that frog-people are some of the coolest characters in the RPG universe. This french stereotype is first encountered when he requests your help. A witch has turned him into a frog and he needs your help to be turned back into his old self. Amusingly, once you’ve found out how to change him back from the witch, he changes from a big ugly frog into a smaller, manlike frog. Jean’s ability to transform into a fully fledged frog and hop up cliffsides on the world map is quite possibly the most useful (and abusable) ability in the game, allowing you to go places you really aren’t supposed to get to until much later and get some really tight equipment. In battle, although it may not seem like it at first, Jean is by far the strongest character in the game thanks to the Shamanization system, capable of wiping out entire mobs of enemies with a single deadly technique.

A cleverly named, sexless plant creature that can talk to nature and call on its aid in battle. Spar can walk through forested areas on the world map which opens up the final areas in the game. Spar has the most number of forms to transform into via Shamanization, each with an entirely different set of statistics, making Spar a very versatile character.

The snake-goddess is back and perverted as ever as a super-secret character in Breath of Fire II. Unfortunately, as a secret character, she has no real back story and simply joins you for the ride. The availability of every spell in the game coupled with her insane stats and her ability to completely restore her HP at will means a party with Bleu is nigh invincible. 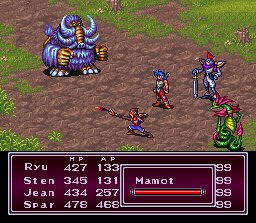 Breath of Fire II takes a huge leap from Breath of Fire in almost every way imaginable. The combat system has been totally revamped thanks to the Shamanization system, one of the most fun and original concepts in any RPG, ever. By finding six shamans spread throughout the world, you can fuse two of the entities to a single character, resulting in four different possible outcomes; Failure – this combination of shamans cannot fuse with this character. Minor success – the character’s stats are sharply augmented. Major success – the character’s color palette changes and their stats are boosted quite a bit. Perfect fusion – the character changes into an entirely different looking and functioning character.

With the shamanization system, the nine character roster actually doubles. Eighteen characters is quite a lot for an RPG, especially in those days, and the fact that they’re still the same characters means you don’t have to worry about a bunch of characters being left out of the story for a long time like Chrono Cross or SaGa Frontier. It’s still a tightly knit group of friends, despite their hideous new appearances.

Breath of Fire II has the same great elements of dungeon and overworld exploration that Breath of Fire did, only not to the same extent. There’s a lot less backtracking and remembering of locations you’ve passed hours ago, and that’s partially a good thing. The world is far bigger now, and has a lot of interesting little nooks and crannies, and lots of optional quests to embark on. There’s a whale you can tear through the seas in, fishing spots to hit with a much more enjoyable fishing game, isolated hunting spots as opposed to animals simply spawning on the map after a battle, and a strange island full of ridiculously powerful giant monsters where Karn and Bo from the first game live.

One of the best parts about Breath of Fire II is the epic side-quest of building your own town. Fairly early on, you’re given an opportunity to make your own town, of which you can choose from three distinct styles; typical brick houses, wooden stilt houses, and middle-eastern dwellings. The town develops in three phases, eventually giving you six buildings, not including your base, the builder’s house, and a mysterious well. Once you have your houses built, you must search the world for people to inhabit them. There are dozens and dozens of characters all over the world that can live in your houses, and most of them have some fairly interesting things to contribute to your bustling township. One person plays all the music from the game for you, one makes statues of your characters, one runs a dojo where you can train, and many of them open up shops that sell great equipment you can’t get anywhere else. 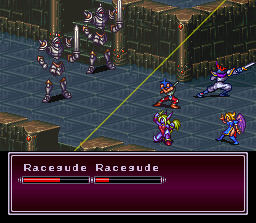 Overall, Breath of Fire II suffers only from a weaker soundtrack and a shoddy dialogue translation. Otherwise it’s one of the better RPGs on SNES, and still stands as the best game in the core series to date.

Only a few months after the re-release of Breath of Fire on GameBoy Advance, Capcom announced they would also port its sequel to the handheld. But as it turns out, Breath of Fire II on GBA is a fairly good port. The game sounds roughly the same as the SNES version, and the color palette doesn’t suffer quite as bad as the first game. The new character portraits aren’t as good as the SNES version’s though, and the translation is the same crappy one used in the SNES version. Like the original GBA Breath of Fire, the gold and experience gained after battle has been increased, so there’s a bit less level grinding. There’s also a run button too, which is nice. 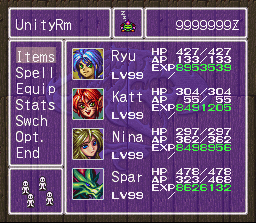 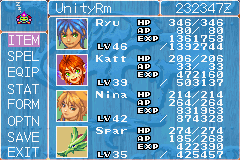 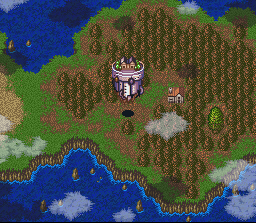 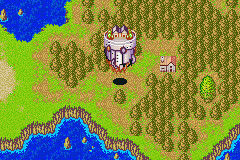 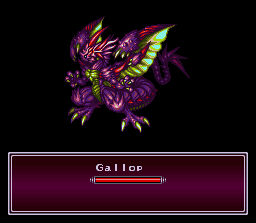 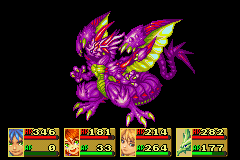