Two years after the original, Data East followed up Dark Seal with a sequel, known as Dark Seal II in Japan, and Wizard Fire elsewhere, disavowing any relationship to any previous games. (It’s easy to assume that the first game was not very popular abroad.) Within those two years though, the visuals have massively improved, a benefit of moving to more powerful hardware. (Even back in 1990, Dark Seal looked a little dated for an arcade game.)

The game fundamentally works the same. There are five characters this time – the ninja is gone, with two new characters, an axe throwing dwarf named Jade Greataxe and a female sword wielding elf named Eminna Jozestore. There are some subtle tweaks in how certain characters play. For example, with the knight and the wizard, you can charge up your weapon strength by not attacking for about a second, which means it’s generally better to not button mash. The elf and the bard are the opposite, though, as button mashing will trigger a special multi-hit attack. Otherwise, the bonus stat items and the magic spells are basically the same. 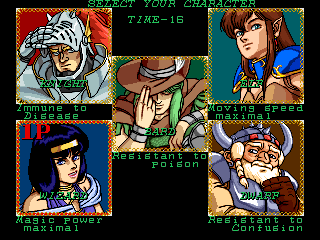 Most of the first game’s flaws have not been addressed either. The early bosses are a little quicker to take down, and you can now cast magic during them (though since you generally can’t build up magic power when fighting bosses, it’s not all that useful), but some of the later foes are gigantic pains. The most egregious one is a battle against two golems, which can only be damaged by hitting their heads, and seem to take a few hundred whacks before they finally go down.

In fact, some things are even more irritating. Status effects, particularly confusion, are much more prevalent this time around, and certain levels have a proliferation of tiny enemies that are very difficult to see. Plus, the first game offered a number of lives per credits. Dark Seal II only gives you one, and it goes quickly, though it’s nice enough to bestow some bonus items upon you when you continue. 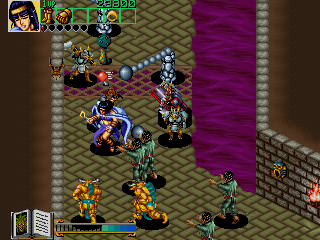 And yet, Dark Seal II ends up being a more enjoyable experience simply because it looks much better and has a much greater personality. There wasn’t much of a story in the first game, just some quick cinemas of the king ordering you around. Here, each level is prefaced with anime-style cutscenes, fully voiced in either English or Japanese. The artwork is pretty good, but both the voice acting and the writing is comically bad, often on the level of a Saturday morning cartoon.

At the outset, the party members discover a ruined town, and suspect that Volov, the penultimate foe from the previous game, may be the culprit. “I heard rumors that Volov may still be nearby”, proclaims the dwarf. Then they turn around and see Volov and his dragon, who cackles, “I’m closer than that, fools! I’m here!” before launching a surprise attack. 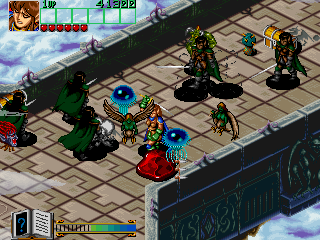 At the end of the third stage, the gang encounters a polluted river. “Curse it! Poisoned water!”, the bard exclaims. “I’ll smash it to bits!” daftly proclaims the knight, who seems to be unclear of what exactly the problem is. Before the fourth stage, your party notices that the castle they need to infiltrate is flying in the sky. “So do we grow wings?” suggests Jade, who isn’t entirely sure if he’s being sarcastic. “No, Jade. We’ll use MAGIC”, proclaims the wizard, a solution that sounds like it came from one of the lesser Disney princesses.

During the game the visuals are superior over the first game by several orders of magnitude. The original Dark Seal had a very dark fantasy-style, with a dark palette typical of many late 80s Data East games, while the sequel trades it for a much more colorful anime aesthetic. 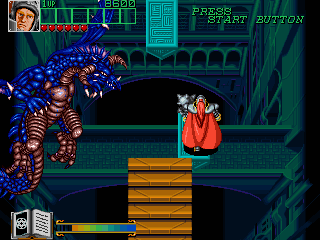 Along with the large characters and isometric perspective, Dark Seal II ends up resembling Taito’s similarly-themed brawler Dungeon Magic / Light Bringer, which was released a few years later in the arcades. The style is also similar to Data East’s horror beat-em-up Night Slashers, even though otherwise it’s nowhere near that level of quality. What it ultimately adds up to is a game that’s a fair bit of goofy fun, even though it’s technically not all that good.

While the original Dark Seal wallowed in obscurity, the sequel was included on the Data East Arcade Classics for the Wii, though it’s just a straight emulation, along with some jagged display issues that affects every other game on the compilation. 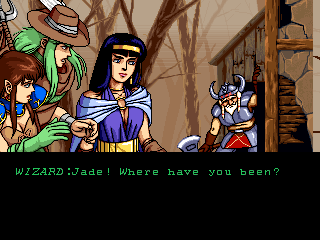 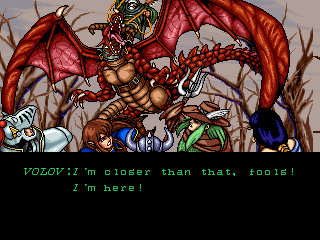 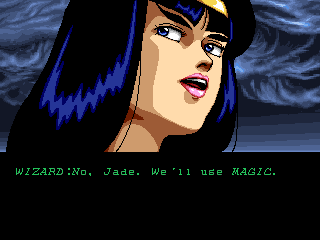 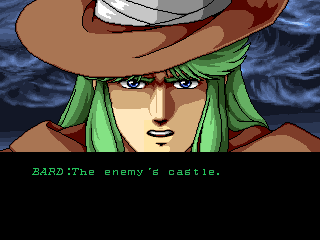 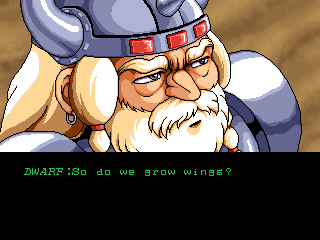