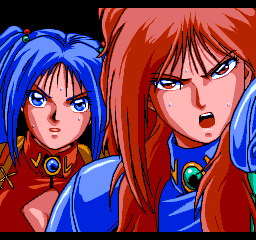 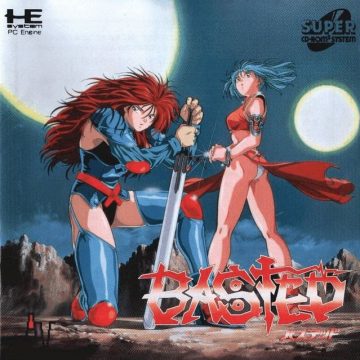 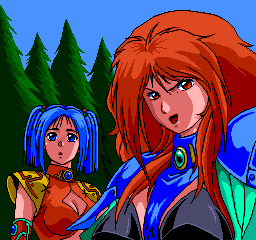 Ryeza is a buxom swordswoman; her partner Anita is a powerful mage. Together, the duo have found a bracelet named Basted, which doesn’t seem to be anything particularly special. But they are soon approached by a masked knight named Kain, who requests their aid to save his kingdom of Marisoon, and only then will they discover the secret power of the treasure they’ve found. 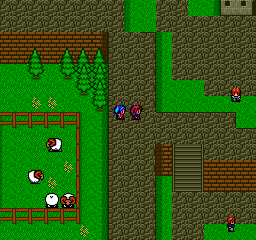 Basted (no relation to the dark fantasy manga/anime Bastard) presents itself as an action-RPG. You wander around forests, towns, and castles, talking to NPCs and occasionally getting dragged into battle. However, there are no random encounters, and every fight is scripted as part of the scenario. There are no experience levels, or gold, or items of any kind, so it can barely be called a role-playing game.

Before each encounter, you can pick between Ryeza and Anita, then the view switches to a small overhead arena where combat unfolds in real time. The action is a bit cumbersome, since your characters move so quickly, and Ryeza’s attacks are so tiny that it’s hard to hit enemies without also taking damage. Anita is a bit easier to use since her moves are all projectile magic. However, both have a few super moves activated by charging up their power, so most battles are just a matter of dodging enemies until you’ve built up enough strength to use them. If you die, you just restart the battle over with no real penalty. 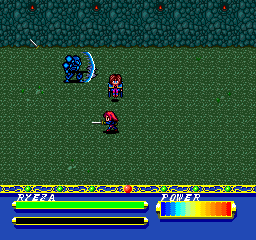 This vague action-RPG framework is just a vessel to deliver the true meat of the game, which are the cutscenes. These were produced by AIC, later known for series like Tenchi Muyo! and El Hazard, with character artwork by Eisaku Inoue, whose designs resemble his later work on the anime B’t X. It’s also pretty funny most of the time, presented as a somewhat self-aware slapstick. It looks and sounds fantastic too, as its bikini armor-wearing heroines will be appealing for fans of games like Valis or anime like Leda. It also came out in 1994, fairly late in the life of the PC Engine CD, where NEC wasn’t too concerned about regulations, so it’s also not shy about nudity – there are a few hidden sequences where the girls hit up a bath and engage in a brief strip show.

Since the game elements are undercooked, it’s better to think of Basted as a mid-90s anime OVA that you occasionally have to play. And that probably would be more entertaining if you didn’t spend so much time in a single town, as you stumble around for event triggers. But even then, the whole experience doesn’t last more than a few hours, and there’s a hidden cinema viewer for those who’d rather just watch it, anyway. 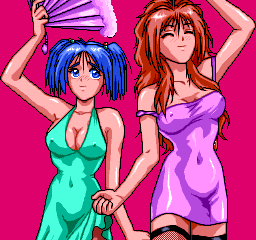 Basted is also conceptually similar to Efera & Jiliora: The Emblem From Darkness, another PC Engine action-RPG featuring two female warriors, which was also based on a larger novel series called Gude Crest. That game was less focused on T&A and more focused on clumsy Ys-like combat, though it’s hard to say which one ends up better.