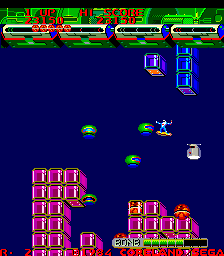 Have you ever played a game that subsists on abstract design and/or baffling gameplay to the point where you ask yourself, “What the hell am I playing?” Lots of arcade games from the eighties had simple objectives that you could glean just by observing their attract demos. Donkey Kong is easy enough, where you just have to reach the top of the screen in most levels except the last one, and all you need to do in Pac-Man is eat all the dots without getting ghosted. Arcade classics that are still famed today have reached their status partly to the adaptability of their rules and how anyone could just play and understand them in a heartbeat. On the flip side, you have those bizarre nuggets which baffle anyone at first glance and slowly drift off into obscurity. SWAT is one of those odd Sega and Banpresto (AKA Coreland) collaborations which has been forgotten nowadays, but no one can be blamed for letting its memory float beyond the aether. Coreland’s made some weird crap for Sega to be sure, but SWAT is only second to I’m Sorry in terms of strangeness, though the former lacks the madcap charm of the latter and just comes off as a confusing mess. 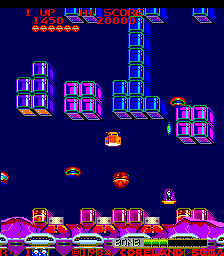 First off, you hear the name SWAT and you think of the Special Weapons and Tactics division of law enforcement. Well, this game has absolutely nothing to do with arresting terrorists, but is instead some game about fighting extraterrestrials. You are the SWAT, a blue-suited dude in a helmet riding a hoverboard of all things, and your goal is to quell the oncoming alien invasion. You must destroy all of the Blocker aliens which look like humanoid forms encased in orbs. Blockers build units, which are glass squares that interconnect with each other. You start out with units around you in blue, and Blockers move forward by constructing pink units. If they fully connect a stream of units to any of the units at the top, the screen turns black and fire rains down, making it incredibly difficult to avoid being killed. However, if you get close to a unit, you can push it away and/or crush it, staving off danger until other Blockers come by. You can also shoot units with your blaster from a distance, but this is only if they are blue and disconnected from enemy tunnels. A counter at the top-left of the screen signifies the remainder of Blockers left, and the round ends when they are all exterminated.

There are other hazards to deal with, like the Expellers which Blockers are able to produce. Expellers serve as cannon fodder which float about and pursue you over the field, and though they can be zapped with your blaster, they are belligerent and numerous. Even worse are the Anngrers, oddly named robots which move slowly but are impervious to blaster fire as they constantly move towards your position. They can actually be destroyed by bombs, but you only have three of them to start and they have fairly long fuse times. If you want to destroy an Anngrer, use its slow speed to your advantage and plan for it to move into your bomb. Finally, there are Sweepers, rarely seen weapons which come out in pairs and move along the edge of the screen. When they line up with each other, the Sweepers fire a bolt of energy back and forth and then reposition themselves before firing again. They’ll continue to harass you until you either die, win, or blow one of them up with a bomb, which can be difficult as they move quickly if somewhat predictably. All other enemies which are not the Blockers are technically unnecessary to kill, but they do all threaten your life and garner points for slaying, so it is preferable to zap and explode them when you can.

SWAT is an overall weird game that seems daunting at first, but once you get used to frying Blockers and shoving units, it does become strangely enjoyable when you’re not being spammed by twenty Expellers all at once. The main problem with SWAT is that it’s just too chaotic, like working as a waiter at a sports bar on the Super Bowl. The screen quickly becomes populated with blocks and enemies, making it difficult to navigate around the field, and you can’t move or shoot diagonally. It’s hard to get much farther than the third stage, and it takes a while for rounds to end, but if you’re patient and just take the threats on one at a time, you’ll be able to accumulate a good score. SWAT is far from Sega’s most memorable game, and its visuals or sounds aren’t anything out of the ordinary compared to every other sci-fi themed game out there. Among the multiple collaborations Sega had with Coreland, this is not one of the more outstanding, but its fervent type of gameplay is admirable if you give it a chance. It’s a fairly innovative title that’s a bit like if Robotron 2084 married Pengo, but that description is shaky at best. SWAT is worth a play to experience something a bit different from your typical shootfests of the day, and while it may not be a keeper for anyone who runs a coin-op arcade, it’s interesting enough for a few quarters.