Here we are at Turrican’s Long Goodbye. Factor 5 are such a talented team, this game could be considered a proof they were the best non-Japanese developers on SNES at times. It is, however, a major departure from the original spirit of series. After many rehashes of graphics and elements, this game is build again from scratch. The Turrican Suit was completely redesigned with a much darker look. When idle, Turrican starts to fire his machine gun into the air. The arsenal involves again the three usual standard weapons; the pocket homing missile from Mega Turrican is back, and the smart bomb this time looks like a nuke blast. Finally, Factor 5 apparently couldn’t make up their mind whether they preferred the grappling hook or the freeze beam, so they put in both, and added a flamethrower for good measure. 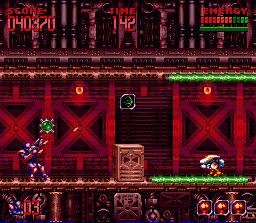 Stages became even more linear, though: all the emphasis is now on special stages where Turrican rides vehicles of any kind: from a desert dune buggy to space motorcycles, and even underwater motojets, all in a true Mode 7 heaven. But the best one is the return of Turrican’s jetpack, used by Factor 5 to craft a stunning overhead shoot-em-up level that pays homage to the great Axelay, with its fantastic perspective distortion. Each of these stages plays wonderfully on their own, but sadly the result lacks of cohesion. When not riding any vehicle, chances are that the player just has to move mindlessly from left to right, shooting everything in the way. The only “big” stage in the entire one is the second, and it pales compared to any of the mazes in the early titles. As a result of this very straightforward structure, the Energy Wheel (time-limited again) has become pretty much useless, if not for self-defense purposes. No need to bother looking for hidden passages.

Even more than Mega Turrican, the game is packed with sensational events and set-pieces, from a worm-riding stage (blessed with the best music in the game), to a spaceship so huge that it demands much use of the bionic arm (now even more reminiscent of Bionic Commando), to just about every single boss battle in the game. Never before have bosses been that spectacular in a Turrican game. They are all very challenging as well. 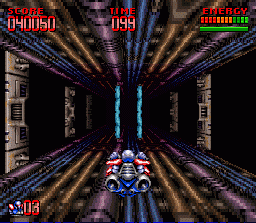 The mood of the game is a lot darker than usual, as mediated through both the graphics and the music. The story is told with pre-rendered cutscenes that somehow manage to not look terribly outdated (even if The Machine looks ridiculous in the intro). Huelsbeck’s dominant theme this time was “military march,” but while the game sounds great overall, only a few tracks really stand out. The soundtrack fits with the overall tone of the work at least, but no one will want to hum this in the shower. 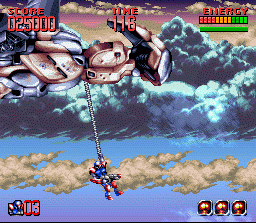 The one big complaint with this game is that it doesn’t play like Turrican at all. The difficulty is not as well balanced, and nearly every stage requires the player to do very things (eg. ride different vehicles), making them feel like individual rollercoster rides in an amusement park, rather than one coherent game. The bionic arm is more intuitive in use than the plasma rope was, but still leagues below Bionic Commando perfection. Super Turrican remains, however, one of the most impressive-looking SNES titles ever, and is worth playing through for its technical merits alone.