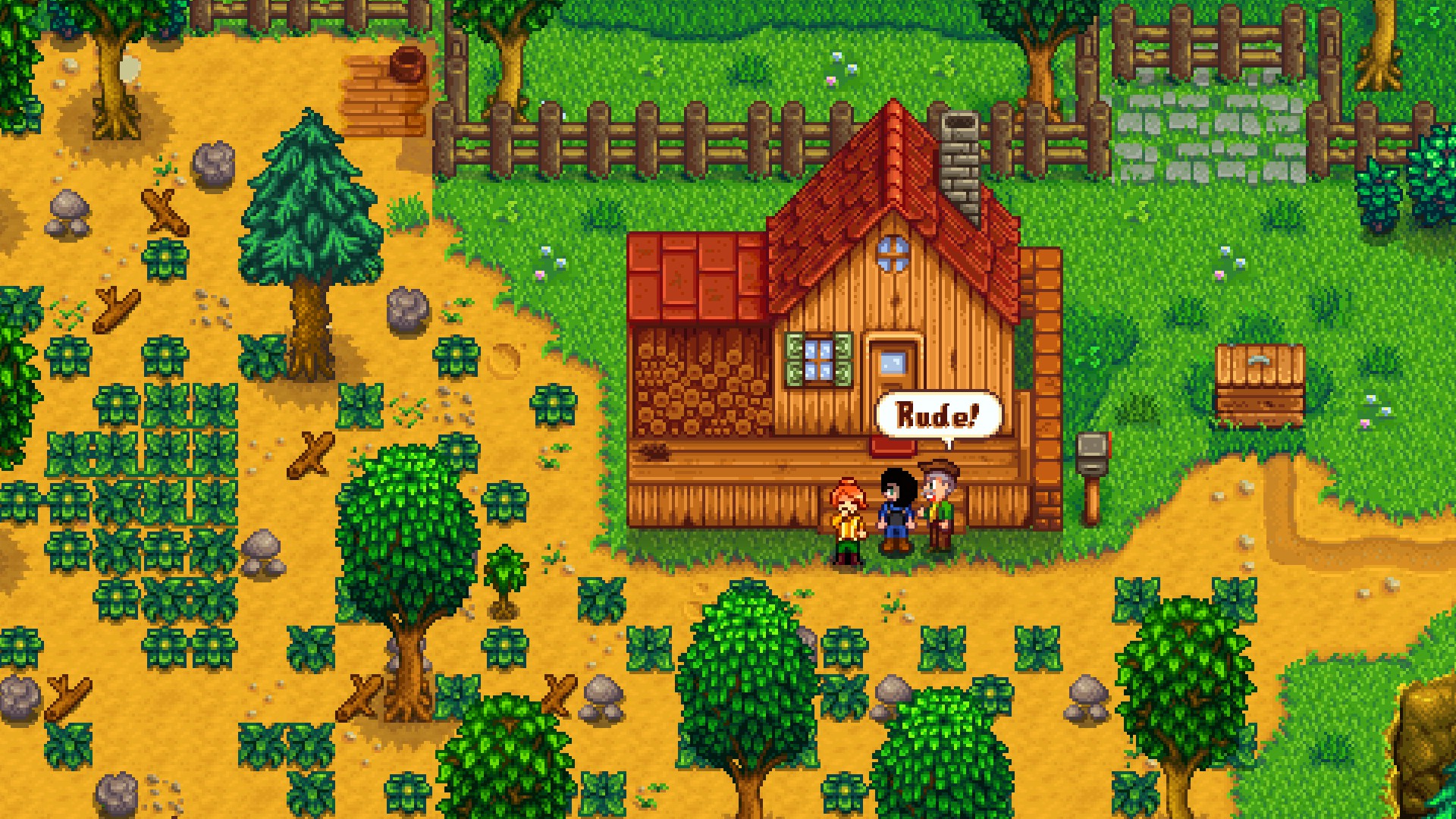 Sometimes, all you need for a direction is to take what you love and find ways to make it better. That sentence by itself grossly simplifies the four years Eric “ConcernedApe” Barone spent building Stardew Valley from the ground up by himself, the first two without publisher Chucklefish’s financial assistance. Yet, it is perhaps the purity of its purpose that best explains why it succeeds. Barone loved the old school pleasures of the early Harvest Moon games, farming RPGs that included the original SNES classic and follow-up tag team Harvest Moon 64 and Back to Nature. He was dissatisfied with the direction the franchise had taken, and his goal was to bottle up the same magic he found with the old games, power it up with the gloss and quality of life improvements of modern technology, and create a brand new title that still retained the simple charms of moving to a quaint village full of mystery, magic, and quirky characters. 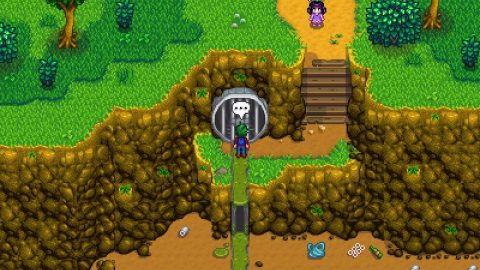 While the concept of a farming game doesn’t strike most as interesting, there was something wondrous about the original, slowly discovering the secrets around a village while doing routine work with gnomes living under your farm. More importantly, this game was about building relationships in ways Super Nintendo games rarely tackled. You can get married in this game, and you can choose who it is and get to know them first! If the limitations of the SNES left the characters a little too basic, along came the next consoles which presented iconic characters in a town where it felt like the player was entangled in a genuine community. One could assist the homeless drifter in getting get a job and maybe help him find love with the cute girl at the inn. Or do the opposite and make him have no choice but to leave. The rhythmic activity is relaxing, working towards a goal is stimulating, and the close-knit town creates a weird emotional bond. If the sluggish gameplay elements could be tempered to something anyone could easily manage, it could be something that strikes a chord with a large audience that had awakened to similar titles from the breakout of Animal Crossing.

And so Stardew Valley did, selling 3.5 million copies within two years of its release including ports to the major consoles, and having names like Mara Wilson openly discussing the game’s sorry sack of a marriage candidate Shane on their Twitter. 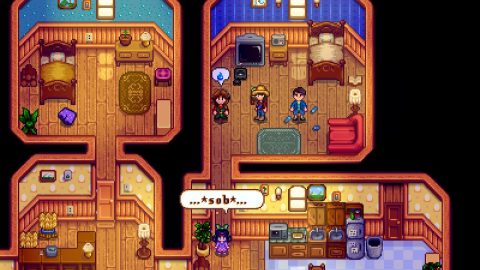 The game wears its inspirations on its sleeve as the plot is a takeoff of Harvest Moon 64/Back to Nature‘s story, inheriting your grandpa’s farm next to the seemingly quiet Pelican Town in Stardew Valley. Grandfather didn’t have the energy to keep up the fields, so what’s left is vast rows of weeds, branches, and rocks that are up to the player to straighten out. When not farming, the customizable main character can visit the assorted batch of Americana and eccentricity that are the townsfolk, from the former star high school quarterback Alex, lush Pam, and literal wizard, um, Wizard. With some residents, the gamer’s avatar can get married and to someone of the same sex if desired. Cash flow is expanded by collecting what washes up at the beach, fishing, foraging, and mining. Borrowing some of the combat slant of Harvest Moon‘s sister series Rune Factory, the mines are dungeons where more than a hoe and sickle will be necessary.

A new wrinkle in the formula is the looming threat of corporate America. The player starts off as a wage slave typing away next to a former co-worker’s skeleton in the white collar branch of Joja, this universe’s stand-in for Walmart. Even when you make the move to the country, there’s still a Joja Mart slowly consuming the place under leadership of obvious toolbag Morris. His desire is to tear down the community center and put in a warehouse gets the new farmer caught between the choice of doing tasks to keep the building standing or surrendering to the new retail overlords. If the town is sold down the river, the game does progress similarly, but expect an ultimate reward that is unsatisfying and insulting. 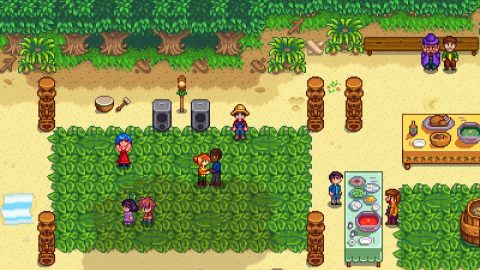 It can be hard to understand why there was a need for a nostalgia dive when the Harvest Moon series never really went away. The games were divorced from localizer Natsume – who had the naming rights – and became Story of Seasons, but they get released. While still featuring lovable characters and a pleasant atmosphere, they are marred by needlessly protracted limitations and false complexity. The first Story of Seasons, sold in the West a year prior to Stardew Valley, holds the player back with nearly a season of tutorials, stamina that makes it ridiculously difficult to do anything at the start, and crafting that requires a tedious amount of steps to create the products needed. Sure, this is a realistic approach to farming and ranching, but if they’re going to go this far, why not add the crushing initial overhead costs, the massive influx of supply forcing many products to be sold at a loss, and the constant threat of losing a limb in a threshing machine accident REAL farmers have to deal with?

Right out of the gate, Stardew Valley restores the serene, easy feel of the initial Harvest Moon offerings. The pixel art is immensely detailed, every room feeling lived in with personal details strewn about, and character animations clearly show Barone has played Chrono Trigger a few times (Remember, he did everything from the coding to the art and tunes). The music properly sets the mood by drifting in and out between soft-but-assertive piano, plucking banjo strings, and layered ambiance. There are even some “mistakes” intentionally left in to keep the charm of a loosely translated SNES game, like when Abigail notes how delicious the quartz you give her looks or oddly worded item requests. Best of all, there is the breath of freedom and the feeling that the new life isn’t just another vice grip of chores. Starting off, 15-30 crops can be tended, a few sacrificed trees can make storage bins to solve limited inventory problems, and going out to live life right away is perfectly doable instead of being chained to farm management. All it asks is a few days patience to unlock some locations. The interface brilliantly streamlines many of the bottlenecks that bogged down previous farming games like having the bag contents on screen with simple button presses to get to any item instantly. Tools are quick to use, and with a few level-ups, items can be built to do some of the work. Install sprinklers and go on an adventure! 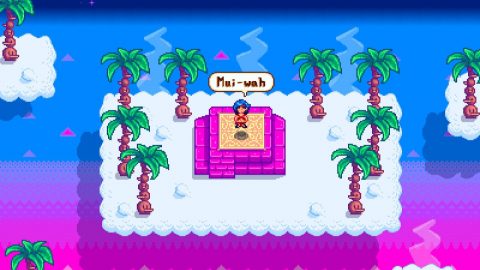 In fact, adventure is what Stardew Valley brings back to the table. When arriving at Pelican Town, there are more than a few weird bits and pieces that stand out. Aside from the forest spirits only the main character can see that spur the action to rebuild the community center, there’s a weird cry at random points, one of the gravestones has obscure writing on it, and where the hell does a man lose his purple boxers that were on him?! While some of these parts may not have specific answers as to why they’re here, their existence adds an extra dimension to the experience. There are still new things to find in this seemingly small game… mainly because Barone is still updating it for free.

One aspect that doesn’t stand as well with the Harvest Moon games is a handful of the villagers. Much of the enjoyment in these games comes from their escapism, and perhaps a few of the characters resembling people from high school doesn’t accentuate that feeling. It doesn’t help that many of the townsfolk are standoffish or downright hostile. There are just as many who are equally cheerful and welcoming, like Emily who is a delight and likely indulges in many recreational substances. However, her sister Haley kicking off things by constantly slagging on your clothes is overly harsh. With many of the characters, the game slow plays its hand, waiting for the hidden layers to be opened with conversations and gifts. If one can’t stand Shane’s initial brushoffs, it’s never found out how deep his depression and self-loathing are so you can help him be a better person. Also, his alcoholism reaches WAY beyond Karen from Harvest Moon 64’s flirts with drinking, and that might be a bit much for this kind of game. There is a rewarding side to keeping engaged with the neighbors, but rude starting points can make the player reasonably put off from seeking them out.

Since this was initially a PC-only game, one of the big plusses was being embraced by the modding community. However, there is one feature that gets overshadowed which may be the game’s lasting legacy: Same-sex marriage without mods. What’s astounding is how basic an addition it was. It was just there, implemented in an indie title made by one guy. No temper tantrums from the publisher, no long-winded rationalizations. And after Stardew Valley‘s massive success, there was a groundswell of games that let you do the same. Even Chinese studio Panthea Games was down with same-sex marriage in its post-apocalyptic carpentry adventure My Time at Portia. If they can do it, what is anyone else’s excuse?

Of course, that’s not the only impact. ConcernedApe made the game because he was dissatisfied at the course the farming RPG franchise he played growing up took and there was nobody else picking up slack. Now with his success, Steam is littered with so many farming RPGs at this point, there’s literally a game about living the rural lifestyle in Twin Peaks (Well, Gleaner Heights for copyright purposes). The wave has also reached to where the genre started. Not only did Harvest
Moon creator Yasuhiro Wada compliment Stardew Valley and meet Barone, but in 2020, the Story of Seasons game released was a retelling of Harvest Moon: Back to Nature, one of Barone’s inspirations. The game had plenty of additions, including easy inventory scrolling from the main screen and same-sex marriage in the American localization, the latter something that previous titles had dabbled in, but were removed by Natsume, the company that handled the Western releases. One ConcernedApe might’ve caused them to go back to their roots on the farm and reassess what was important.

Yasuhiro Wada’s comments on it:

And a Mara Wilson tweet about Stardew Valley for good measure.