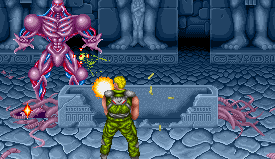 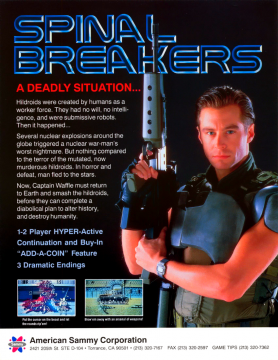 1988’s Cabal was a mild success for the TAD Corporation, who only made about a half dozen games before dissolving. The game itself was a relatively simple affair where your soldier dodges oncoming enemy fire and returns with bullets and grenades. Meeting a fair medium between Contra-style run-and-guns and Hogan’s Alley-type lightgun galleries, it seemed like the “Cabal Shooter” was fun enough to catch on, but surprisingly few other companies really got in on this style of gameplay. For those which did, TAD would try again with the Old West-themed Blood Bros, Seibu Kaihatsu’s Dynamite Duke came just before Raiden, SNK went back to war with NAM-1975, Natsume went to the SNES for the fantastic Wild Guns, and while not as well known, the completely insane Riot (published by NMK, possibly developed by Tecmo) is also quite excellent. Amidst this brief cluster of Cabal-likes, Spinal Breakers was dropped into even greater obscurity. It’s too bad it went unknown with a name like that, but it sounds more like a Mortal Kombat ripoff than a gun-centric affair. 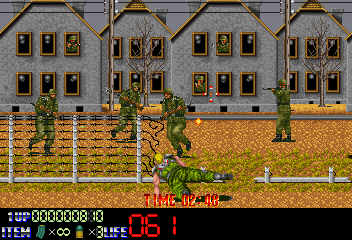 Video System was always a relatively mediocre company, but they were briefly acknowledged for the Aero Fighters shmup trilogy, before the core of that staff left and formed Psikyo. Still, you can’t be blamed for missing anything by “V-System,” but Spinal Breakers is worth a look for its amazing name alone. On top of that, the protagonist is a soldier named Captain Waffle, ranking up alongside “Ferdinand Social” from Master of Darkness and “Wink Baufield” from Phalanx as one of the most hilariously bad hero names ever. (He also appears in Aero Fighters 3.) Waffle is the only man left to fight after the “Hildroids,” previously subservient to humanity, take over the world after a nuclear cataclysm. The spotty English of the opening cutscene makes it unsure exactly what the Hildroids are; they’re either androids, zombies, or parasites that somehow cause a rift in time and bring back ancient soldiers to fight for them, or they’re imitating the soldiers or they’re possessing them… it’s confusing, whatever the case. It’s just a flimsy premise to shoot down warriors from history’s past over seven zombie/robot-infested countries.

The action doesn’t keep you on one screen but instead moves you slowly to the right across a panoramic landscape, similar to Dynamite Duke and Riot. And you do move quite slowly, perhaps a bit too casually for a projectile-ridden hellscape. Waffle’s also a much larger sprite than most other Cabal shooters and the enemies are usually only a few feet away from him, so enemy fire hits him pretty easily. You start out with thirty-two life points per credit, but this tends to drain quickly if you’re too offensive-minded, so you better make frequent use of the dodge button. You’ll likely be spending half of the time in each level rolling Waffle out of the way, which can get annoying if you’re adverse to just feeding credits into the machine. It’s a quarter-muncher to be sure, but Spinal Breakers does grant some concessions with power-ups that you obtain through property damage. Said “property” often includes formerly human corpses that explode in a gory muck when shot, making this the bloodiest of all Cabal clones. It’s wretchedly humorous to blow open a body and watch a somehow edible waffle fly out. No fooling, you actually get waffles to restore a bit of your health, and considering the hero’s name, one has to wonder what V-System staff member was so voraciously obsessed with breakfast. 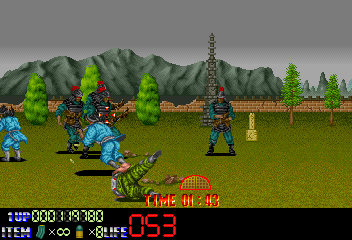 Other bonuses include drugs that make you temporarily invincible, large shells which serve as your large-area-wrecking bombs, and more powerful machine guns and shotguns which give you a clip or two of stronger ammo. Your normal gun has to reload after about every twenty shots, which seems pretty dumb considering most other Cabal shooters give you an infinite clip, but I guess points for realism. There’s not much else on how to play except to describe the levels themselves, taking place in “Europe,” China, Russia, Greece, Egypt, Japan, and America. Perhaps the developers didn’t want to get into trouble by spelling it out, but the “Europe” stage is very clearly Nazi Germany, where you fight MP40-toting soldiers in front of a concentration camp. You see the phrase “Arbeit Macht Frei” (work makes you free) over the gates, a common phrase at the entrance of most slave labor camps including Auschwitz. The sad thing about this display of poor taste is that it’s the most memorable level, with most other stages either being flat featureless fields or generic buildings. If nothing else, they at least have interesting enemies, like China’s tumbling acrobats or Russia’s triceratops with pores that open up in their body and fire bullets at you. There are also some interesting bosses like a semi-skeletal tyrannosaur, a six-armed warrior with a sword in each hand, and a rather grotesque final boss which defies any explanation. 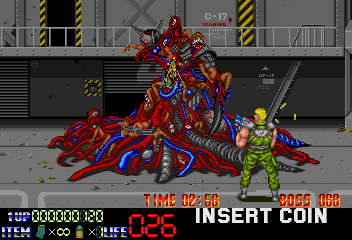 While its brazen stupidity is novel, something just feels off about Spinal Breakers as a game. Its graphics would be better if more effort was put into the backgrounds and the music is of low quality. The gameplay feels a bit jerky and even less fair than its contemporaries. The well of innovation runs dry for some levels, most accentuated in Egypt where you just fight the same blobby tumors throughout the entire level instead of pharaohs and mummies. Yet even after all these faults, it’s still worth giving the game a shot simply because Cabal shooters themselves are few in quantity. Spinal Breakers may be on the lower end of the spectrum, but its fundamental gameplay is still mindlessly entertaining, and its grotesque title is practically half the reason to play it. It’s the little touches that make it what it is, like Captain Waffle eating waffles to gain waffle… erm, health, and player two is a blue clone of Captain Waffle for no adequately explainable reason. There are even three different endings, a good one and two bad ones where either Waffle or his family turns into Hildroids, though the conditions to trigger which one you get is unknown. If you’ve got twenty minutes to waffle away, why not break some spines?