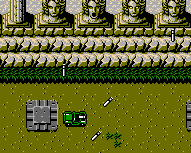 Overhead “run-n-gun” shooting games in the vein of Commando and Ikari Warriors normally take place on foot, though the latter allowed you to commandeer tanks until they were severely damaged. SNK had expanded this idea in TNK III (enhanced and released for the NES as Iron Tank), where you would pilot a tank from start to finish. Konami fashioned Jackal out of the same basic premise by putting you behind the virtual wheel of a military vehicle instead of hoofing it. Instead of a bulky tank, the transport of choice is a quick and well-armed jeep, not commonly seen in most war-themed games at the time. Without much story to go on except that “you are fighting the bad guys of a nefarious enemy nation”, you take the jeep through heavily guarded POW camps, free the prisoners, and destroy all the bad guys. For such a simple idea, Jackal turns out to be one of Konami’s best pure action titles of the mid-eighties. 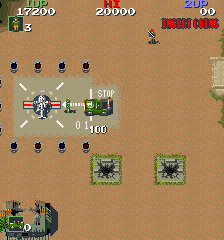 The original arcade version, titled Tokushu Butai (“Special Force”) Jackal in Japan, Top Gunner in North America, and Jackal everywhere else, plays in an uninterrupted stretch without any checkpoints. You can either play solo or take a second player along for some jeep-based carnage. Four named commandos in charge of the jeep: Colonel Decker, Lieutenant Bob, Sergeant Quint, and Corporal Grey. Your weapons are a machine gun and grenades, both of which are naturally unlimited in ammunition. The jeep itself, able to move in eight directions, also counts as a weapon, as you can run it over enemy foot soldiers without blowing up yourself.

An interesting difference between the two localizations involves the direction of the machine gun. In the Japanese version, the machine gun turns as you do, but in the American release, the machine gun stays permanently affixed to fire north. This may seem like a restriction, but it provides a tactical advantage by making you able to fire at enemies in front while retreating from them. Most enemies are best off being dispatched by grenades anyway, and in either version, grenades always launch where you face. Another minor change in Top Gunner places an American flag on the jeeps, at least giving some clarification to what country you fight for even if the enemy nation remains ambiguous. 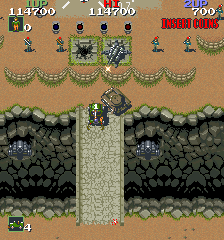 The main objective of Jackal is to obliterate the enemy headquarters at the end of your designated route, but there is also the secondary objective of rescuing prisoners of war, much like the helicopter action game Choplifter. Most buildings are destructible and cough up four prisoners after wrecking them with a grenade. Some buildings hold single special prisoners which rapidly flash red, and picking them up changes your grenades to rockets. While rockets cannot be thrown over structures like grenades, they travel faster and at a greater range. Rescuing another special prisoner upgrades your rockets to generate a greater horizontal explosion on impact, and snagging one more improves the vertical range to make each rocket burst in a powerful cross formation. You can only hold eight prisoners at a time, but you get to drop them off at nearby rescue helicopters for big points. However, if you are destroyed at any time, some of your passengers may be killed, but you can pick up the remaining half after starting another life.

As was the case with most 80s arcade titles, a single hit on your jeep equals instant death. In addition to losing a life and some prisoners, your secondary weapon is also downgraded. The enemy forces feature foot soldiers that move and fire slowly, and while they can easily be run down with the jeep – which is quite a bit of sadistic fun – they compensate via sheer number. Defense turrets are another common threat, and while stationary, they are often placed in groups of two to four at a time in any given area. Other enemy vehicles include tanks, which function similar to turrets with the obvious advantage of mobility, jeeps similar to yours in terms of speed, jet bombers which toss down grenades (often while you attempt to unload passengers into the rescue chopper), and submarines which assault you while attempting to pass over narrow bridges. The action can get incredibly chaotic, and it is tough to get to the end due since there are technically no continues, although you can technically a cheat a bit by bringing in a second player when you perish, then alternative through to the end. However, you win if you manage to ride all the way to enemy headquarters and destroy their main base. 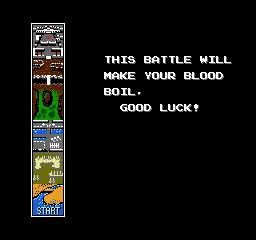 Enjoyable though the arcade version may be, it is Jackal‘s NES port which stands out as the definitive version in a case similar to Contra‘s main fame on the console. It kicks the game off with an awesomely encouraging message: “THIS BATTLE WILL MAKE YOUR BLOOD BOIL. GOOD LUCK!” Instead of playing as one long continuous ride, the NES version subdivides the action into six stages, each with a unique overall feel to them with several original areas not found in the arcade, including a naval base and a murky swamp. Each stage now ends with a tough boss fight, like a quartet of statue heads that spit homing missiles and a large battleship armed with six spread-shot cannons. The graphics are more colorful than the arcade original if not quite as detailed, and the music has a faster tempo. There is not too much variety in the tunes (stage 1’s music re-plays in stage 4, for example), but what is there perfectly complements the action and upholds Konami’s trend of excellent music. 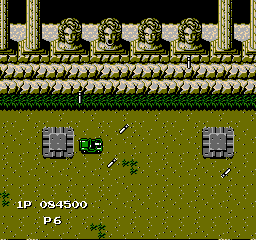 The difficulty feels fairer than the arcade version and the action is generally less chaotic, but it’s still difficult enough to keep you aware of your surroundings. If you drive around too recklessly, you could easily run right into a turret shell or even a turret’s body. You start out with five lives and get four continues, a more generous helping of chances than Contra but still limited and demanding that you be careful. In addition to collecting POWs for points and upgraded weaponry, you can find hidden stars that instantly give you rockets at maximum power, wipe the screen clear of enemies, or grant you an extra life. Somehow, your jeep now apparently has hyperspace capabilities and can hold an infinite amount of POWs, and you can earn some major points (and thereby earn a few bonus lives) if you manage to find all in a stage and deposit them at the rescue chopper. The caveat is that you lose all but four of them should your jeep be destroyed, and considering you do not have a set time limit, that is further incentive to play it safe. Jackal might not have been Konami’s most recognized hit at its release, but it was favored by Konami enough to be shamelessly plugged alongside Contra in their hockey title, Blades of Steel. Today, it stands as one of their most entertaining action titles of the later eighties, an era which was something of a “Golden Age” for Konami in general. 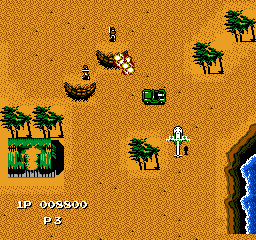 Before its familiar cartridge form, it was first made in Japan for the Famicom Disk System under the admittedly cool title, Final Command: Akai Yousai (Red Fortress). This first iteration is actually worse than the later cartridge version, as it does not include the first stage which takes place on the beachfront. Furthermore, the screen never scrolls horizontally, making all stages feel cramped and somewhat incomplete. This is a result of RAM restrictions with the Famicom Disk System hardware – since an entire level had to be loaded into RAM, Konami needed to cut levels short. It does have one interesting feature not found in any other port: an alternate two-player mode where P1 controls the wheel white P2 is in charge of the gun and explosives. While this alternate two-player mode is an interesting idea, it is ultimately less thrilling than having two whole jeeps wreaking havoc in tandem. Unless this “two players, one jeep” mode sounds appealing, this is otherwise a rare case where the American port is superior to the Japanese original. 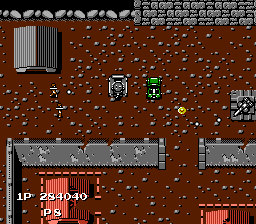 Aside from the retailored NES/Famicom versions, direct ports of the arcade rendition came to the Commodore 64, Amstrad CPC, ZX Spectrum, and IBM PC. There are two different Commodore 64 ports, one released in Europe and the other in North America. The European version is worse, with smaller sprites, tougher enemies, no two player mode, and unchanging terrain that lasts all the way to the end. The American version controls and looks better, plus does a better job of emulating all of the areas of the arcade game. The Amstrad version, meanwhile, is pretty sad, with the playing field bordered by useless pictures of the commandos and a playing field roughly a third of the size of the screen. Combined with sluggish controls and choppy animation, it’s pretty much unplayable. The ZX Spectrum version opens with a unique message – “It is the way of the JACKAL” – and while it’s letterboxed like the Amstrad version, it’s not as zoomed in and it controls a bit better, and the graphics are alright for the platform. The IBM PC version is far away the worst, offering grey graphics and impossibly slow control. For some reason, it takes roughly a second for your jeep to change direction, which of course leaves you a sitting duck for the many turrets that fire much faster than you can move. None of them have in-game music, though the Amstrad and Commodore versions play renditions of theme song on the title screen. None of them let you pick up any POWs after dying either.

The NES version was re-released on Japanese mobile phones in 2002 alongside many other Konami NES classics, abd benefits from very slightly upgraded graphics. While the NES version is arguably superior to the arcade original, the arcade version can be enjoyed on the Xbox 360’s Live Game Room service. 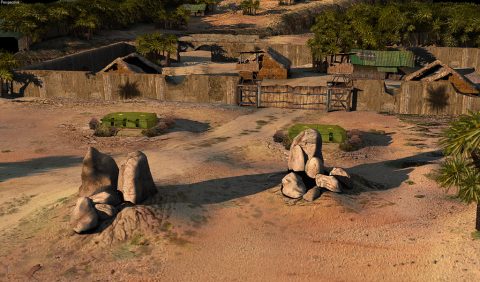 In 2009, a few screenshots surfaced of what looked like Jackal revamped with 3D graphics. Rumors were abound that this would be “Jackal Rebirth“, part of Konami’s modern set of old-school tributes to their classic action titles released on WiiWare which, so far, only includes Gradius, Contra, and Castlevania. Unfortunately, it was never completed or released. 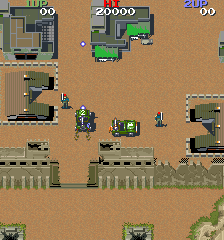 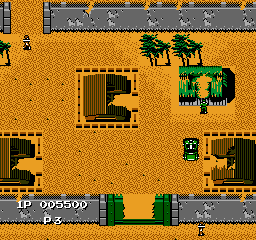 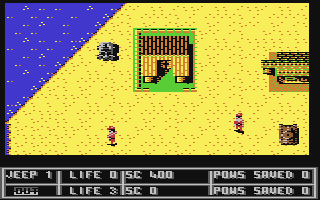 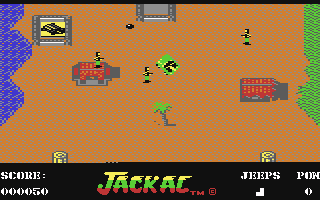 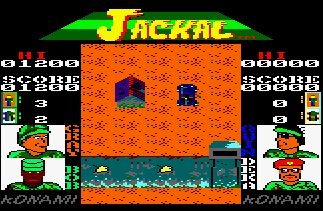 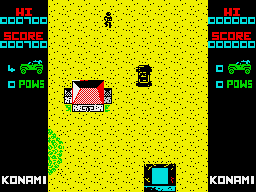 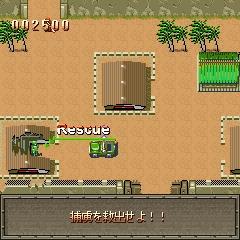 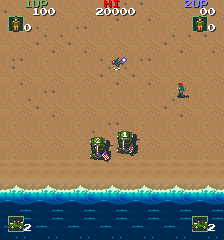 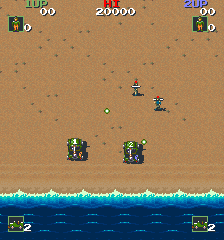