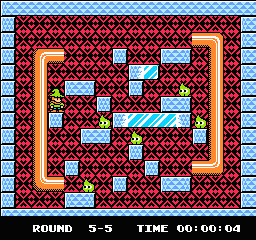 Solomon’s Key 2 is a follow-up that came out in 1992 but only for Nintendo’s 8-bit console. North American NES users know it under the name Fire ‘n Ice, with an abstract cover, complete with humorous disclaimer about the supposed addictiveness of the cartridge. The distributors technically weren’t wrong, however: being a prequel, the story has nothing to do with King Solomon, and the main themes of the game are indeed fire and ice. Still, they could at least have put Dana on the cover like the Japanese and European versions did, with a somewhat Disney-esque design for the latter.

The story is about the frozen island of Coolmint, which is being attacked by the evil wizard Druidle and his army of flame creatures. The queen of the winter fairies, Coolmint’s ruler, entrusts novice wizard Dana with her ice wand, in order to defeat the enemy before he completely melts the island down. 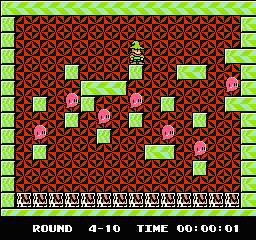 The game is again a single screen puzzle-platformer, with the emphasis on the puzzle part this time. Dana can conjure blocks, though these are now ice cubes and the goal is to extinguish every flame on screen, thanks to said cubes. However, Dana can’t place the cubes directly in the spot occupied by the flames and call it a day: he has to push or drop them over the flames. The cubes, unlike the first game, can only be conjured in the diagonal spaces below Dana, but he is able to push them to make them slide on the ground and also create ice bridges by sticking cubes together. There are pushable rocks too in some levels, but they can be pushed for only a single space. As you can see, the gameplay becomes more in line with those block puzzle games a la Sokoban.

Naturally, as far as these games go, things start easy enough but become increasingly complicated, with other elements like pipes that Dana can use to move around, burning jars that melt ice and so on. The devs however understood that the original game was too frustrating, so made this prequel much more user-friendly: there are passwords (save states in the original), unlimited continues, a clock instead of a time limit, and you can choose to start from every world and every stage within them, outside of boss levels. Interestingly, the original Japanese version also had the option to press the Select button to undo one move, a feature that was removed from all subsequent versions.

The game also eases players into understanding how the mechanics work instead of just dropping Dana into rooms full of angry monsters. As a puzzle game it’s still quite tough in latter levels, but at least, being not an arcade title, gives you time to think and plan every move.

There are ten worlds divided into ten stages each, for a total of a hundred screens. The tenth stage in each one is the boss’ fortress, which isn’t accessible until all the other nine screens in that world have been completed. The scene when Dana enters the fortress always plays the same way: he confronts the enemy, who after a little speech opens a trap door that makes the wizard fall into the stage. These stages play a little differently from normal ones, in that there’s either a number of roaming monsters that must be crushed with blocks or avoided, or some fire/lava rising from below that makes solving puzzles more hectic, not too unlike the original game. 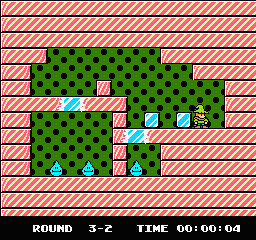 Even after having defeated Druidle at the end of world 10 the game still isn’t over, though. When the ending cinema finishes, after a while the fairy queen pops up to give Dana a final challenge: a code that has to be entered on the title screen to unlock a gauntlet of super-hard levels from 101 to 150, in order to prove that he’s really a wise and brave magician. Also included the sound test.

The graphics are quite happy-looking and colorful, and there’s this cute touch that the whole game is framed as a fairy tale that an old grandma is telling to two little kids: for example, restarting the game with the passwords will let the kids ask granny to remember the story she was telling them the other day. A nice approach if compared to the original, which was perhaps a bit too stark for a fantasy game.

The world map is typical of a fairy tale setting, with forests, castles, a volcano etc., however the actual stages aren’t themed in any way and their graphics just consist in colorful abstract patterns. The levels haven’t much in the way of sprites, but each world has a different kind of flames, some of which are quite silly with their little faces, angry or goofy grins, wearing shades and so on. Another amusing touch is that the intro shows Druidle as a dark figure looming over Coolmint Island, and when you finally get to confront him you see that he’s actually a giant, and the intro wasn’t just a visual metaphor.

All things considered, Fire ‘n Ice is a good puzzle game for all ages, with a nice presentation, proper difficulty curve and an interesting theme that prevents it from being too abstract.

There is also an Amiga remake of the game written in Assembly around 2015 by a Finnish developer who goes by “hukka”, with assets mostly lifted from the NES version and retouched with other programs. Some elements are missing, but all in all this is a faithful conversion, and also includes the level editor. Info and downloads can be found at this page: http://hukka.ncn.fi/index.php?sk2